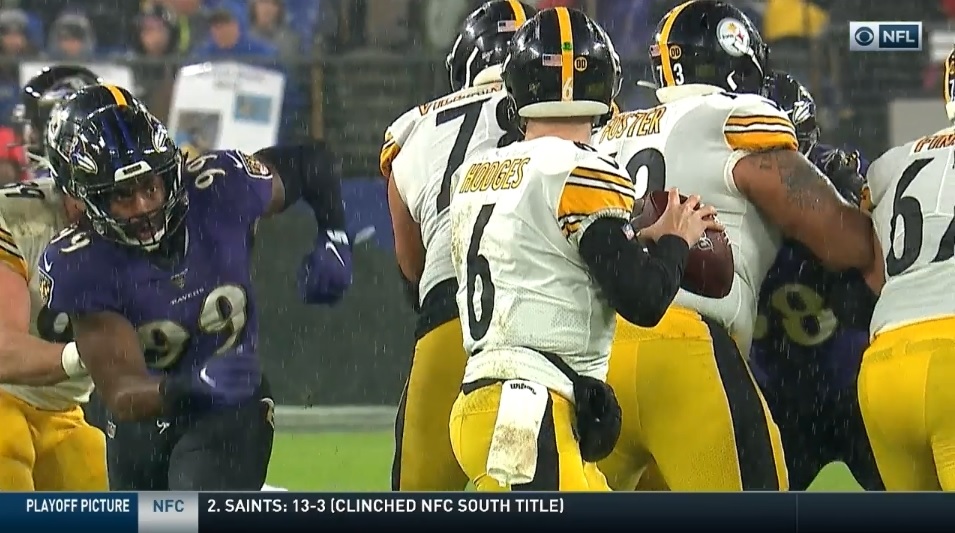 For the final time from 2019, our weekly sack breakdown to check out what went wrong on the two allowed in the finale versus Baltimore.

We will do a full breakdown of the season-long results next week.

Against the Buffalo Bills, we outlined the Steelers’ strategy in trying to pick up overload blitzes from ILB and DBs. The issues centered around the Steelers’ six man protection, a half-slide check that wasn’t enough.

It looks like Pittsburgh tried to use full slide protections against the Ravens. Here’s how the blocking scheme looks pre-snap. 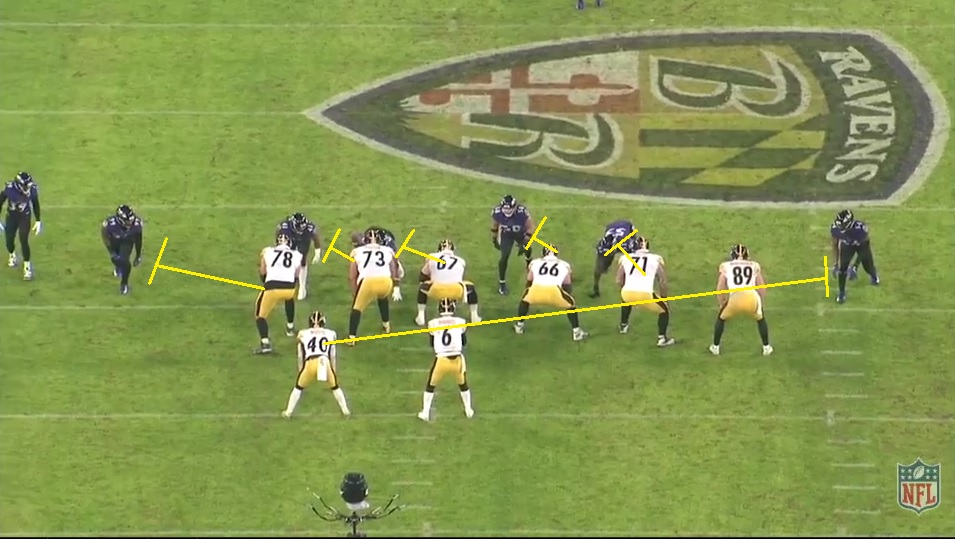 The problem is the DB to the left, #39 Brandon Carr, isn’t accounted for in the scheme. Like the Bills and Jets game, Baltimore manufactures a free rusher by dropping the away side LB out and bringing a blitzer from the opposite side. Steelers simply don’t have a way to block it up.

This *looks* like Ramon Foster’s guy, I know, but you have to play inside/out and expect #97 to hit his gap and #41 to hit his. Foster works off #41 once #97 loops down and BJ Finney is uncovered but he isn’t athletic enough to redirect Carr, who drops Hodges for the sack.

My initial thought was that this was on Kerrith Whyte but the more I look at the play and believe this is a full-slide by the o-line, Whyte was responsible for any edge blitz by #54, the LOLB.

So if #39 is unaccounted for and rushes, the ball must come out hot aka, right away. And that option isn’t here. Check out Vance McDonald. Yes, he’s on a check release, watching the OLB before getting out into his route, but he takes literal seconds to actually cross the line of scrimmage. This simply isn’t quick enough.

Maybe, and I know it isn’t a guarantee, if he gets into his route quickly enough and his head around, Hodges can check it down to McDonald for some sort of gain as opposed to a loss. Lot of issues on this play but this sums up how disappointing of a year Vance had.

I’m putting half on Vance here for not getting into his route, it could’ve prevented the sack, and half on the protection scheme for again not having any reasonable answers against DB blitzes. These issues existed the entire game and honestly, over the final three weeks.

Blame: Half on McDonald, half on scheme

TE screen here to Vance McDonald. Why why why?? As soon as McDonald comes off his man to face Hodges for the screen, that defender has a free lane to the QB and he rips the ball away from Hodges which the Ravens end up recovering.

I suppose the hope here is that McDonald can shove #99 into Alejandro Villanueva and then release but with Villanueva covered up, that fails.

Hodges must show better ball security here but that isn’t reason for the sack. Randy Fichtner called a TE screen on the 45 yard line against the Jets, that one lost five yards on 3rd down, and he went back to the well the following week. Another negative, worse, result. Just an ugly playcall in a crucial moment before the half that truly changed the tide of the game.