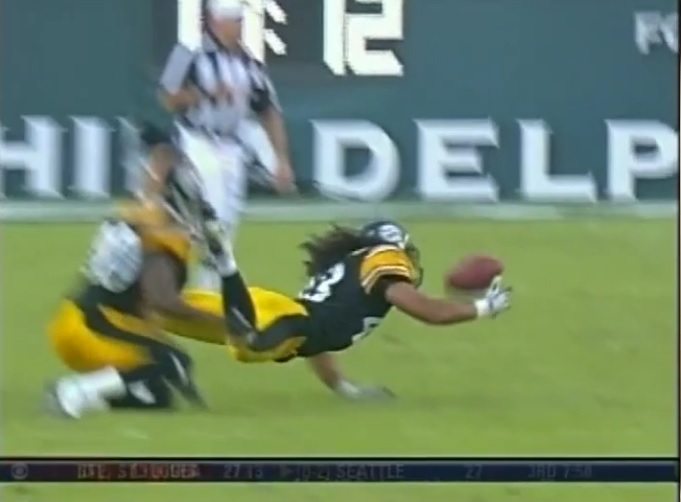 In a way, it’s a moment we were hoping would never happen, and yet have been anticipating for some time. Five years ago, the thought of Troy Polamalu being announced as a finalist for the Pro Football Hall of Fame wasn’t on the minds of most Pittsburgh Steelers fans, because it would mean that his playing days were behind him, and they didn’t want that. But they knew that once that moment came, it wouldn’t take long for him to be enshrined.

Polamalu was officially named a finalist yesterday, and we’ll know in a few weeks whether or not he gets in. his contemporary, Ed Reed, was a first-ballot Hall of Famer just last year, which is a good sign for his own candidacy. But at the very least, his nomination gives people the excuse to reflect on his career.

And he never had a better on-field relationship with anybody than he did with Ryan Clark, who was in many ways the straight man to his seeming slapstick that always seemed to come in just at the time that it was needed.

Clark shared some of his thoughts on his good friend and offered some anecdotes as well, appearing on The QB Podcast. On playing safety with Polamalu, he said, “it was like being in a circus. You think that they’re going to be able to do the high-wire, but you’re just not sure, but you know they’re gonna try it”.

While he described it that way, however, he of course understood better than anybody else that the high-wire act was indeed quite calculated and meticulous. “It was cool, because I think people thought Troy guessed a lot”, he said, “and he really didn’t. We would talk during the week, ‘alright, if I see this play, I’m gonna jump it’”.

He gave one example, in which Polamalu explained to Dick LeBeau why he shouldn’t drop a linebacker on one safety blitz he liked to call.

He would blitz Cover 3 a lot, so Dick LeBeau, our D Coordinator, put in a blitz that looked like Cover 3, but instead of Troy dropping to the flat, Troy would blitz and the outside linebacker would drop to the flat. But he would always tell Coach, ‘Coach, don’t call that’. And Coach was like, ‘well, why?’. He was like, ‘the beauty of it is that nobody’s in the flat. If you send somebody out there, we’re still only rushing four. I want to be the fifth guy that they didn’t think was coming’.

Outside of more distant memories of Barry Sanders, there was nobody that I have ever personally seen play the game of football that so purely brought out the joy of the game than Troy Polamalu. I think that probably goes for a lot of people reading this. It’s always fun to hear some details of what went into that, and Clark has long been a great source of such information.