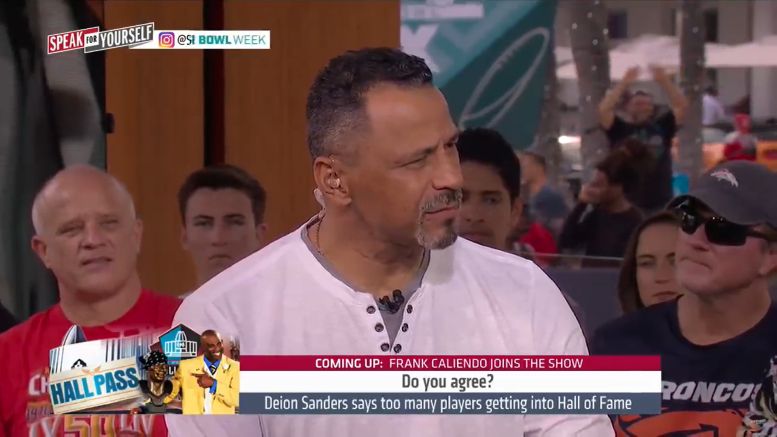 I wonder what the NFL thinks about some of their most high-profile Hall of Famers in the media taking shots at the Hall of Fame and their Centennial class virtually on the eve of the 2020 class being finalized. First, Deion Sanders said that “every Tom, Dick, and Harry” is a Hall of Famer these days.

Now former Pittsburgh Steelers cornerback Rod Woodson echoed similar comments, referring specifically to the Centennial class, through which former Steelers safety Donnie Shell and former head coach Bill Cowher were elected. Shell instructed Woodson as a rookie, and Cowher coached him for five years. Of course he didn’t name any names, but what does he think of their enshrinement?

“I’m in agreeance with the Centennial class. Every year we have to have a mandate where we have so many guys go in, I’m not a fan of that”, he said on Speak for Yourself yesterday. “If you belong, you belong. It’s supposed to be the best of the best. The Centennial class, I’m just not a fan. What’s gonna happen at 125 years? Are we putting another 15 guys in? Or 150 years, are we putting another 20 guys in? And what’s gonna be the criteria for those guys who go in?”

I can answer that question for him. The Centennial class only happens once a century. It’s not going to happen every 25 years. it didn’t happen 25 years ago, or 50 years ago, or 75 years ago. It’s not going to happen 25, 50, or 75 years from now. None of us will probably be alive in 100 years to see if it even happens again. This is, so far as we know, a unique occurrence, so it’s irrelevant to the future.

“I understand what he’s saying, I agree with it. I’m not a fan of it”, he said, speaking of Sanders. “But that’s the Hall of Fame. They made that decision to do it. I know all the guys who are going in are gonna be thrilled. When they get there, I’m gonna embrace them, because they’re gonna be wearing the gold jackets, they’re gonna be my brothers. But I do question why they did it, and what’s the criteria for them to get in on a daily basis?”.

The Centennial class was voted upon by a uniquely-assembled panel of experts in the field that, frankly, feels more qualified than those who voted on the modern candidates. It included names like Bill Belichick, Bill Parcells, Ozzie Newsome, and John Madden, and flat out, I would have more faith in their knowledge of players from the 50s than beat writers who probably hate their jobs.

To be honest, the argument rings a bit hollow without naming names. Who is going into the Hall of Fame who isn’t deserving of it? If everybody who gets in is deserving, then everything is fine. If there shouldn’t be a minimum number of enshrines every year, then there shouldn’t be a maximum either. But then you quickly run out of players if you put everyone in simultaneously, with perhaps two or three worthy players becoming eligible per year after that.