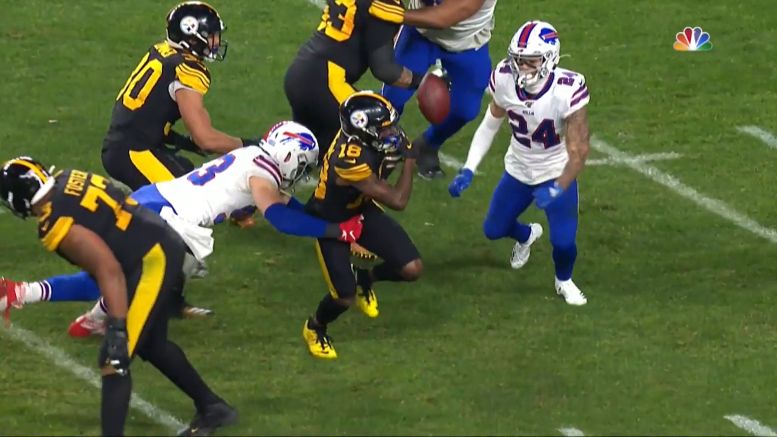 While there are certainly those who were very high on Diontae Johnson coming out of college, there was certainly a majority of people who probably scratched their heads when the Pittsburgh Steelers used the 66th-overall pick on the wide receiver out of Toledo.

He had some great tape. He looked like a very good route runner. He separated well. And he made plays. But, he also had some handling issues. As it would turn out, he pretty much exemplified his college scouting report over the course of his rookie season in Pittsburgh.

In part due to in-season circumstances, Johnson ultimately played a larger role sooner than anticipated, and it ultimately resulted in him catching 59 passes for 680 yards and five touchdowns. Outside of JuJu Smith-Schuster and Mike Wallace, we haven’t seen many rookie years like that in Pittsburgh. He also ended up as the second-team punt returner.

But he also fumbled the ball five times. That was the second-most among all skill position players, behind Chris Carson, and tied with Derrick Henry, during the course of the regular season. Three of them came on offense, but he also fumbled twice in his role as punt returner.

“He has been explosive at times. He has been pretty reliable at the catch point. He needs to continue to work on his ball security”, Brian Batko of the Pittsburgh Post-Gazette quoted offensive coordinator Randy Fichtner as saying. “This league is nasty when it comes to always playing to the whistle and trying to force that ball”.

Johnson fumbled two times in the game against the Buffalo Bills, the Steelers’ first of three losses to end the season. Both came on offense, the first lost at a critical moment, in scoring position at the end of the first half. It was a direct snap to James Conner, handed off to Johnson, who was hit from behind and lost the ball, Buffalo recovering.

The second fumble came on the Steelers’ very next offensive play, the first of the second half. Devlin Hodges hit him on a deep pass for 29 yards, during which he gave Tre’Davious White a stiff arm, but while he was fighting for extra yardage, a defender came from behind and knocked the ball out.

For somebody who had fewer than 100 total touches all across the board between offense and special teams, five fumbles is a really high number. He also had a number of drops over the course of the season. There’s no one area of his game that he needs to improve more than ball security heading into year two. It is possible.