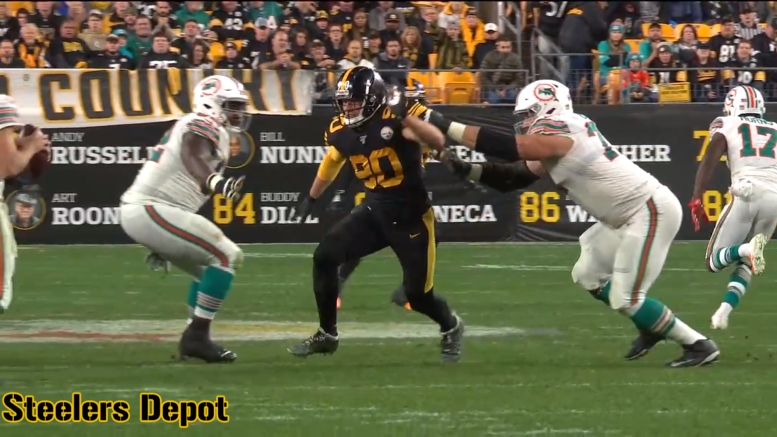 It doesn’t take anybody long to appreciate TJ Watt’s dominant 2019 campaign. 14.5 sacks. Eight forced fumbles. Seemingly making big plays game after game. But there’s a new way to measure his dominance. Teams knew how much of a threat he was, double-teaming him in an effort to slow him down. Even then, Watt found ways to win.

According to Pro Football Focus, of all edge rushers, Watt had the 6th highest “double-team win” rate in the NFL. From Neil Hornsby.

Another interesting @PFF stat for 2109… Win rate on pass rushers vs. 2+ blockers. pic.twitter.com/F6H674bqMr

His dominant season will make him one of the league’s highest paid defenders, perhaps overtaking Khalil Mack for that top spot. It’s possible the team works out a long-term deal with Watt during the offseason though if that occurs, it almost certainly won’t happen until the summer. When it comes to the OLB position today, the team’s focus is on locking up Bud Dupree to a long-term deal.

What makes Watt’s season all the more impressive is the volume of snaps he was asked to play. Only three other edge rushers played a higher percentage of snaps than him: Chandler Jones, Dupree, and Houston’s Whitney Mercilus. That speaks to a level of conditioning and toughness to be ready (and available) for every game, never looking tired or showing signs of hitting the wall.

Should Watt win DPOY, he’ll become the seventh Steeler in team history to do so. The last to do it was Troy Polamalu in 2010. James Harrison, Rod Woodson, Jack Lambert, Mel Blount, and Joe Greene (who won it twice) are the others. No team has more such awards than Pittsburgh.