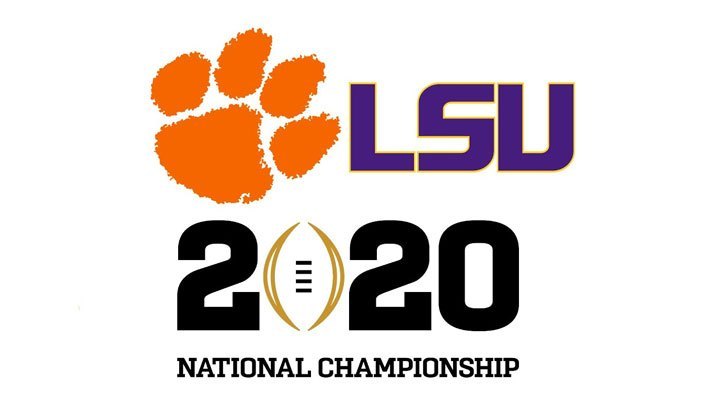 The pinnacle of the college football season has finally arrived as LSU gets set to take on Clemson in the CFP National Championship game. Clemson is the defending champion though LSU will try to knock them off their throne. This will be one of the most anticipated matchups in quite some time as two future number one picks will go head to head.

It is only right to start off with the likely number one overall pick in LSU quarterback Joe Burrow. The last time anyone saw Burrow, he was lighting up the Oklahoma defense, throwing for 493 yards with seven touchdown passes to zero interceptions. The legend of Burrow only continued to grow with his performance against the Sooners and he can put the stamp on his college career with a national championship victory. Burrow is an accurate quarterback and has passed for over 5000 yards this season along with 55 touchdowns to just six interceptions. In fact, his last interception came nearly two months ago on November 16.

Burrow’s favorite target has been receiver Justin Jefferson. The LSU receiver has really become a hot name in the draft world. Even in a deep receiving class that is very top heavy, Jefferson has shown that his name deserves to mentioned with the best of this year’s receiving class. He has recorded 102 receptions for 1434 yards and 18 touchdowns thus far, including a four touchdown and 200-plus yard performance against Oklahoma. Jefferson can play in the slot or out wide and last time he took the field, he showed off some great body control ability. It is looking very likely that Jefferson will be in contention to be a first-second round pick.

3 TD in the first half 💪 #CFBPlayoff pic.twitter.com/3kcPDUtrh4

LSU’s passing attack is complimented by a very quick and shifty running game. Clyde Edwards-Helaire is LSU’s top running back and he is incredibly dangerous in the open field. At 5’8 and 209 pounds, Edwards-Helaire is incredibly elusive. Making his draft stock even better is that the LSU running back is also a huge contributor as a receiver, catching 50 passes for 399 yards this season. He has also rushed for 1304 yards and scored 16 rushing touchdowns. Should he declare, he could be selected sometime during day two.

While LSU has an insanely talented offense, do not sleep on their defense as it is also loaded with many potential high draft picks, starting with safety Grant Delpit. As I mentioned in a previous preview, Delpit misses more tackles than anyone would like to see but he will still be near the top of the class in this year’s draft. Delpit simply has too much talent to ignore as he is a jack of all trades. He comes downhill quickly to negate any short passes, he can also play in the slot and can also cover the last half of the field. He has tremendous instincts and range and that has pushed him to eight career interceptions and 24 passes defensed.

Similarly to Delpit, Kristian Fulton will have to work on his tackling ability at the next level but when it comes to his coverage skills, he is as ready for the pro-game as anyone. Fulton excels in man coverage and at 6’0, he has the size that many teams will look for as well. Over the last two seasons, he has recorded two interceptions and 19 passes defensed.

LSU outside linebacker K’Lavon Chaisson is a very athletic pass rusher that has a lot of upside. There has been no final decision on whether he enters the NFL Draft but he has shown a lot of promise over the last month. Chaisson has gone up against Georgia and Oklahoma in his last two games and he has recorded three sacks over those two contests. The LSU pass rusher has good speed off the edge and has shown an ability to win with leverage as he always keeps his pad level low.

He will not be eligible for the draft for at least another year but I can not go without mentioning Clemson quarterback Trevor Lawrence, just for the sheer fact that watching him battle Burrow will be a quarterback matchup for the ages. Lawrence has thrown for over 3400 yards this season along with 36 touchdowns and eight interceptions.

Travis Etienne is really just a natural runner at the running back position. He has such a great feel for the running game that he makes every big run look so easy. With tremendous burst and agility, he is as good as gone once he gets to the second level. He has rushed for over 1500 yards this season while scoring 18 rushing touchdowns and should be one of the first running backs off the board this spring.

The latest receiver to come out of Wide Receiver University – I mean Clemson, is Tee Higgins and boy, is he special. Higgins is one of the biggest playmakers in this year’s draft class as he better at winning jump balls than Shaq. With his 6’4 height, Higgins can go up and snatch footballs from mid air. His strong hands give him the ability to really reel in some tough grabs. The Clemson wide receiver has recorded 1115 receiving yards and 13 touchdown passes this season. His 19.9 yards per reception was also second best throughout the entire ACC and expect him to also be one of the first receivers selected during this year’s draft.

The jack of all trades, Isaiah Simmons is too talented to be shoed in to one position. Simmons has played all over the field for the Clemson defense, playing both safety and linebacker. Simmons recorded 97 tackles, seven tackles and three interceptions this season. A defensive coordinator’s dream, Simmons is a playmaker that can make plays no matter where he is positioned. He will be one of the most intriguing players in this year’s draft and should be taken early in the first round.

Clemson LB Isaiah Simmons is the only Power 5 player with at least 6 Sacks & 3 INT this season:

Both these teams will come out with very talented defensive backs and Clemson’s main guy in the secondary is cornerback A.J. Terrell. To opposing receivers, good luck if Terrell gets his hands on you. At 6’1, the Clemson cornerback is great in man coverage and can go toe to toe with any receiver. Terrell is also very physical and plays with a lot of swagger. He also recorded two interceptions this season. He could be selected towards the back end of the first round, if not sooner.

Also in the Clemson secondary, look for safety K’Von Wallace. The Clemson safety has recorded five career interceptions with at least one interception in each of his last four seasons. Wallace really has a high ceiling and could prove to be a very rewarding selection for the team that selects him this spring. He has good instincts and comes downhill very efficiently.

This is a 2-fer for CLEM S K'Von Wallace. He reads the route to make an INT vs CHAR, then takes it to the house. Next play, he's reading the run and attacking, not stopping until the RB is down. #SnapScout pic.twitter.com/OhtH1I9soJ

With all the playmakers that will be in action, it may be hard to keep focus on the trenches but all eyes will be on two Clemson offensive linemen. John Simpson and Tremayne Anchrum are two big immovable masses that piece together the Clemson offensive line. Simpson is a 330-pound guard was an All-American and First Team All-ACC selection. Anchrum also earned First Team All-ACC honors and has been Clemson’s starting right tackle for the past two years.