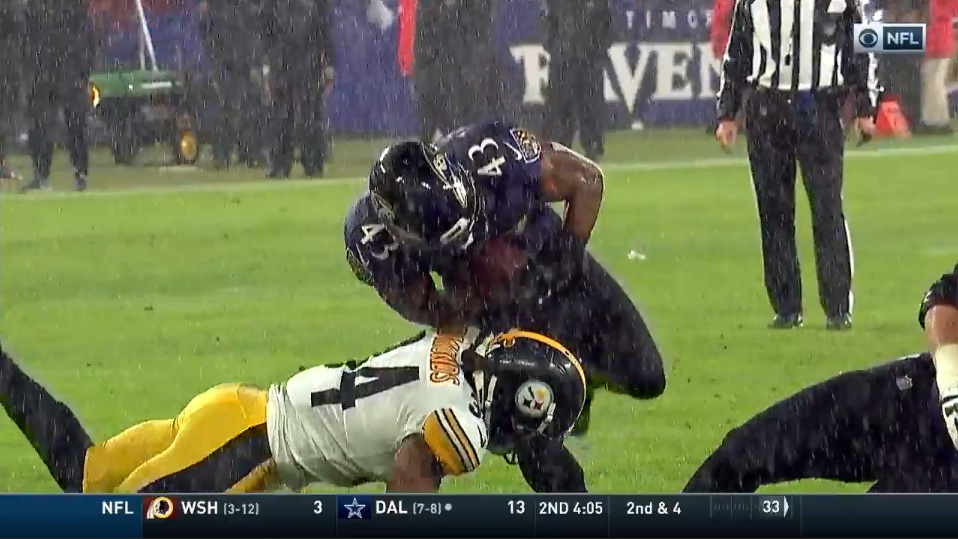 The 2019 season came to a disappointing close on a dreary day in Baltimore for the Pittsburgh Steelers. Effort lacked from a few key guys, morale was way down, and the tackling took a step back in the downpour that was Sunday’s game.

With so much on the line Sunday against the AFC North champion Ravens, the Steelers did quite a bit of scoreboard watching, which ultimately led to the down performance late in the game.

After having to do so much overall throughout the season, the Steelers’ defense simply ran out of gas late in the game.

Overall, the Steelers missed 9 tackles on Sunday in Baltimore.

As you can see, Terrell Edmunds led the Steelers in missed tackles this season with 15 on 120 total attempted tackles, leading to a miss rate of 12.5 percent, which was the fourth-highest miss rate on the team for starters.

Unfortunately for Edmunds, his miss on Sunday came in the worst possible spot: in the red zone, leading to a touchdown by Justice Hill.

Then, Cam Heyward and Steven Nelson miss near the goal line. You’d like to see one of them get Hill on the ground to give the defense a chance to fight one more down, but all of that is a moot point if Edmunds makes the 1-on-1 stop in the hole.

In the third quarter Gus Edwards and the Ravens really started to get going downhill against the Steelers.

Look at that cutback lane. Somebody messed up.

I gave Mike Hilton a miss here because he came free off the edge into the backfield and couldn’t make the play. It’s a play he’s made often this year, and he came up short here.

I don’t give Bud Dupree one here because Hilton is in the way, impeding him from Edwards.

Credit to Minkah Fitzpatrick here for getting a hand on Edwards and holding on for dear life for the stop. That’s a grown man tackle in bad conditions.

Late in the third quarter, Edwards flat out wore down the Steelers, ripping off yet another sizeable gain while forcing two missed tackles.

Joe Haden comes up with a whiff in space, ducking his head while going for the tree trunks on Edwards. After Haden misses, that leads to Fitzpatricks’s second miss of the game. He ducks his head and curls his arms in to almost avoid the big shot. In turn, he completely whiffs, allowing Edwards to pick up a few more yards.

Notice that team number for the season. The 126 forced missed tackles means the Steelers lost the tackling competition for the season by a mark of -3, which is their best mark in the four years I’ve been doing this for Steelers Depot.

Benny Snell Jr. really impressed me on Sunday in bad conditions. He ran hard, had some edge to him and really gave the Steelers a spark offensively on a day in which very little was done.

This 19-yard run set up his 4-yard touchdown on the very next carry.

Snell Jr. runs through 2 tackles early in the carry, staying on his feet after the second forced miss, allowing him to reach the 4-yard line.

If Snell Jr. loses some weight like all the Steelers running backs have done in years past, look out. He’s a powerhouse back with a solid frame and good contact balance. The arrow is pointing way up.

As for Diontae Johnson, the Steelers have a star in the making with the ball in his hands.

Johnson forced 4 missed tackles on Sunday, 2 on punt returns and 2 on this catch on a crossing route.

I gave him one forced miss on LJ Fort because Johnson obliterates any semblance of an angle the former Steeler has on him. After that, he causes a Ravens defender to look silly, sidestepping the tackle attempt to pick up a few more yards.

He might be just a rookie with a slight frame, but he’s electrifying and will only get better. Steelers got themselves a good one.