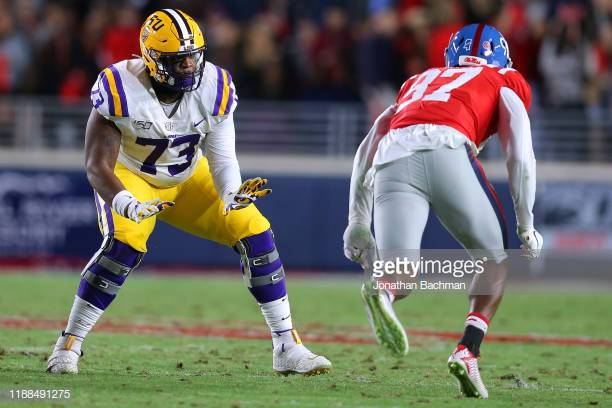 It’s finally here. My first Pittsburgh Steelers’ mock draft of 2020. In past years, my first mock strictly used only Senior Bowl players but I’m expanding things to the entire draft class this time around. Still, my focus has been on those in Mobile and I’ll learn more about the underclassmen throughout draft season.

I am, by the way, giving a 3rd round comp pick to Pittsburgh for this mock. Know it’s not official but it can be safely assumed and to conduct one without it seems pedantic.

I’ll likely unveil my next mock right before or after the Combine.

Analysis: Hopkins is a senior and I know, the Steelers typically kick things off with an underclassmen. Then again, this is a second round pick, not a first, at a position of need and he checks several other boxes. Power 5 with tremendous football bloodlines. Father Brad Hopkins was an NFL offensive tackle for 13 seasons with the Oilers/Titans.

Hopkins had a productive career with the Boilermakers. He’s physical after the catch, one of the more explosive players at his position, with enough in-line and run blocking work to make me feel comfortable about projecting him to that role in the NFL.

He’s a little on the small side, his weigh-in was a touch disappointing coming in under 6’4, but the Steelers need a tight end in the worst way even if Vance McDonald is retained and returns to 2018 form, two major question marks.

Plus, and I know this is a super minor connection, Randy Fichtner is a Purdue alum, even if that was well before Hopkins’ time there.

Analysis: The Steelers need a much bigger and better middle of the field presence. Here’s some numbers to put that into context.

Those numbers are relative too, removing the QB play element out of the equation as much as possible. They simply didn’t have the assets worth targeting between the numbers. McDonald and JuJu Smith-Schuster’s injuries played a role but McDonald’s future is up in the air and JuJu still spends much of his time on the outside.

So adding Hopkins and now Proche will be that shot in the arm to the MOF. Proche is a sure-handed slot receiver with tons of production, those are normally the type of receivers this team likes to target, with kick and punt return value too. The new Emmanuel Sanders.

Analysis: Finally get their nose tackle in the middle. Hamilton is a hybrid between old school and new. A decent athlete who wins with power but isn’t an immobile giant a la Daniel McCullers. Hamilton impressed at the Senior Bowl and you know the Steelers love their Buckeyes. Javon Hargrave is as good as gone and there aren’t any in-house options to replace.

Hamilton can be the two-down plugger, though can’t replicate Hargrave’s pass rush ability. That will be done with a healthy Stephon Tuitt and Isaiah Buggs taking a step forward in his sophomore season.

Analysis: Can’t go too far in a Steelers’ mock without linking them to an underclassmen. Charles was one of the many Tigers who left school early. He played left tackle at LSU but with those measurables, probably will kick inside at the NFL. Maybe even ends up getting work at center.

But his tape is impressive and the Steelers need interior offensive line help and someone who can be a chess piece. No team knows the value of investing in offensive linemen better than the Steelers, who rebuilt their front five in the early 2010s and have continued to add even when it surprised some, like taking Chukwuma Okorafor in the 3rd round of the 2018 draft. I think Charles could end up going higher with a strong pre-draft process. For now, I’ll put him in the fourth round.

Analysis: Throwing in another underclassmen because even with just six selections, it’s hard to see them drafting five seniors. Bit of a Ryan Mundy feel with this one. Went to Iowa but he’s a local product from New Castle, PA passed over by most big schools.

Average to below average athlete which, full disclosure, doesn’t generally mesh with what the team looks for at the position, but Iowa players are always tough and he picked off four passes in 2018. Finished his Hawkeyes career with six of them. Steelers have zero safety depth. Not even Jordan Dangerfield is under contract and Kameron Kelly showed he doesn’t have a home on the defense. Marcus Allen’s struggled to make the team, let alone see the field in any meaningful way.

A sixth round pick doesn’t move the needle significantly, if you’re counting on him, you’ve got problems, but these are the ills of a team with limited cap space and draft capital. Pittsburgh should strongly consider trading back from #49 on draft day.

Analysis: Another offensive linemen but again, no team knows the value of addressing the position more than Pittsburgh. And depth is thin, assuming Ramon Foster and BJ Finney aren’t Steelers in 2020. Magee has started at both tackle spots but his most extensive time has come at left guard and that’s probably where he profiles best in the NFL.

Magee is one of the most physical linemen in the draft who caught national attention for these two vicious blocks during the season. He’s #73, the left guard in this clip versus Vanderbilt.

These two blocks by LSU LG Adrian Magee might be the most physical pass pro rep in football history. pic.twitter.com/qnVSwPF4VN

Magee had some maturity issues in college but got out of the doghouse, a testament to him growing up and earning the trust and confidence in the coaching staff. But he’s still known as a prankster and source of levity in the locker room and reminds me of Zach Banner. When the Steelers’ draft linemen, they come big, and Magee fits that description at 6’4 343.

Valid concern about drafting two linemen, neither of which have much of a center resume, but I think you’re getting two LSU linemen who can round out team depth and make the bottom of the roster much better. You need several guys to compete for jobs with so much youth among the backups as opposed to past years when there may have only been one spot available that naturally created competition.