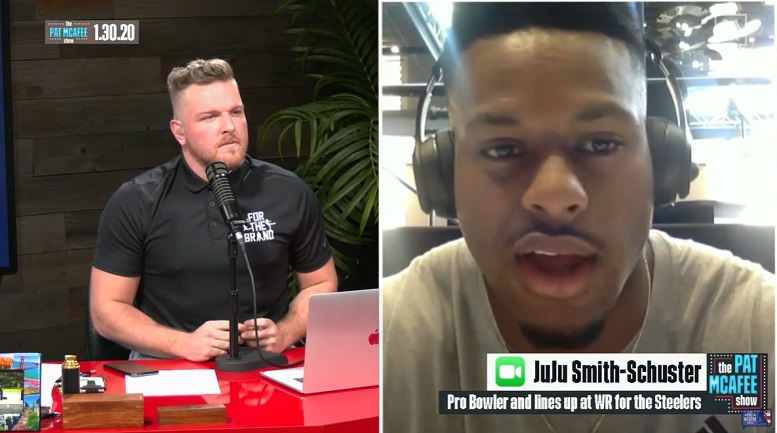 Pittsburgh Steelers wide receiver JuJu Smith-Schuster had a third season to forget in 2019 as the team’s former second-round selection out of USC only registered 42 receptions for 552 yards and three touchdowns and missed four games with injuries. After taking a little personal time right after the season ended, Smith-Schuster seemingly got right back to working on getting himself ready for the 2020 season and that included him training with Corey Calliet.

This week, however, Smith-Schuster is in Miami doing a few brand promotions ahead of the Super Bowl and one of his first interviews was with former NFL punter Pat McAfee on his show. During that interview, Smith-Schuster talked about how he’s going about getting himself ready for the 2020 season.

“Man, I’m training with a trainer, Corey Calliet,” Smith-Schuster told McAfee. “It’s a one-on-one session, but he trained like Michael Jordan, a lot of other guys. Just getting lean, losing weight, cutting up, getting faster, working on routes and stuff like that. So, I’m trying to get to that next level.”

Due to the 2019 season that he had; Smith-Schuster is facing quite a bit more criticism from Steelers fans and media members alike. Most of that silly part of the Steelers fan and media base believe that Smith-Schuster spends too much time doing things off the field that don’t involve him preparing himself to be a better player. Things like brand-building, public appearances and gaming events, for example.

On Thursday, McAfee asked Smith-Schuster if he hears that silly chatter from fans and if it affects him at all.

“Oh, for sure, man,” Smith-Schuster said. “You know, when you don’t perform at the highest level and have high expectations, the first thing you hear about is, like, ‘Oh, he’s playing too much video games. Oh, he’s doing too much branding stuff. Too many sponsors. He’s doing too much stuff off the field.’ And I think that’s how it was.

“But you know, for myself, I just stayed focused. I block out the noise. Those were the things that I knew was going to come with me here and all that. So, it was tough season. You know, the situation that we had with different quarterbacks, me having my own personal injuries to my knee and stuff.”

Smith-Schuster’s tough 2019 started right at this same time last year when former Steelers wide receiver Antonio Brown started taking unnecessary shots at him on social media. Those shots seemingly started right after Smith-Schuster was voted the team’s MVP for the 2018 season. Smith-Schuster told McAfee on Thursday that he was essentially blindsided by Brown’s comments and actions against him.

“It kind of came out of nowhere, you know, it came out of left field,” Smith-Schuster told McAfee. “I did not expect to see any of this. You know, playing with Antonio Brown my first couple of years, like, we always talked about being great and dominating. And that’s what we did. Our last time that we played with each other, we both had over a thousand yards and a hundred catches. And what’s going on right now off the field social media wise, it’s pretty, pretty crazy. I did not expect none of this.”

While Smith-Schuster no longer has any sort of relationship with Brown, his teammate for his first two seasons in the NFL, his relationship with quarterback Ben Roethlisberger is great, according to what he told McAfee on Thursday.

“So, my relationship with Ben is amazing, it’s actually pretty awesome,” Smith-Schuster said. “You know, my first year was kinda tough because he doesn’t like our rookies, especially wide receivers. I guess when you have a guy who’s been in the league for 15 years plus and I had to work towards that, prove myself that I can play with him and that’s what I did.

“So, our relationship is great. This past season he’s been hurt, he’s been injured since Week 2. And you know, he’s been around, actually. He’s been traveling, he’s been in the office, he’s been helping us out. He just one of those guys, man, that just wants the best for the team.”

While most might not like to see Smith-Schuster actively building his brand off the field and especially when he and the Steelers aren’t playing well, there’s absolutely nothing wrong with that and especially the way he’s been going about it. His Instagram videos of him training aren’t over the top, either.

2019 was an extremely tough season for Smith-Schuster and it started this same time last year. Him taking over the No. 1 wide receiver spot would up being an incredibly tough challenge for him that was made even tougher after Roethlisberger was lost for the season in Week 2. Smith-Schuster then getting injured in Week 11 and subsequently missing the next four games was concrete icing on top of a very unsavory 2019 cake. Oh, and let’s not forget the sudden passing of Smith-Schuster’s position coach, Darryl Drake, during training camp.

We’ll now wait and see if he can rebound from some a tumultuous season in 2020 and reestablish himself as one of the top wide receivers in the NFL. He’ll have a more experienced set of wide receivers surrounding him in 2020 in the form of Diontae Johnson and James Washington and hopefully a fully healthy Roethlisberger as well. All those things potentially stand to help Smith-Schuster register an amazing season similar to the one he had in 2018.