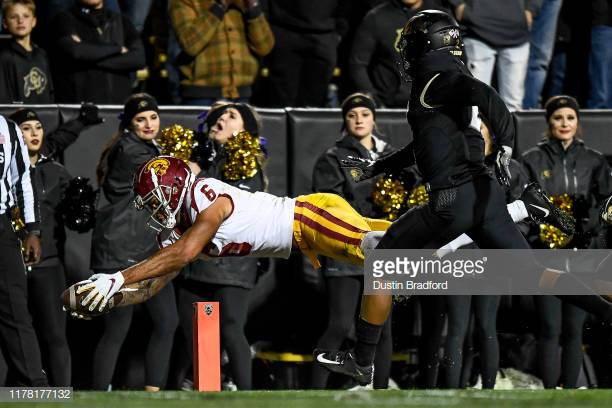 Nearly 40 years ago, the Pittsburgh Steelers drafted a USC receiver named Lynn Swann and then a few years ago they dipped back into the USC receiving pool, drafting JuJu Smith-Schuster in 2017. Both former USC receivers have contributed greatly to the Steelers’ success with Swann ending up in the Hall of Fame and Smith-Schuster off to a historic start. One current USC receiver who has learned a lot from both of these individuals is Michael Pittman Jr. and there is a possibility that he could be next on the Steelers’ radar.

Pittman recently participated in the 2020 Senior Bowl and following Thursday’s practice, he confirmed to me that he had in fact sat down with Steelers coach Mike Tomlin at some point during the week.

“I met coach Tomlin and we sat down and had a good conversation,” said Pittman.

While Pittman grew up in Southern California, he does have roots to Pittsburgh and that runs through both Swann and Smith-Schuster. Both receivers had a big presence during Pittman’s time at USC and were instrumental in his development, both on and off the field.

Swann was USC’s athletic director from 2016 to 2019 and he shared many conversations with Pittman as he was rising up through the USC ranks. The duo would talk frequently due to their receiver background and Swann always made sure to offer words of encouragement for the younger USC receiver.

“Lynn was our athletic director. I actually talked to him a lot. I saw him everywhere. I called him coach Swann and he was always around because he was a receiver and we have a receiver background. Lynn Swann was one of the greats, him and Stallworth,” Pittman continued. “He would say to keep up the good work.”

While Swann contributed more as an off-field presence, Smith-Schuster served as a leader on the field and in the locker room during Pittman’s early years at USC. While Smith-Schuster and Pittman only played together for one season at USC, they still formed a connection that remains to this day.

When Smith-Schuster departed USC for the NFL in 2017, he left behind a standard of hard work and consistency. While these were certainly big shoes to fill, Pittman was determined to carry the torch and fill the void left by the now Steelers receiver.

“I feel like JuJu is also one of those effort players where like if you’re always going fast, good things happen. Being consistent and working hard, he really set that standard when I was at USC and I kind of took that role when he left.”

The Steelers selected both of Pittman’s main influences and should the team choose to call his name on draft day, he would welcome the opportunity to play for one of the NFL’s most storied franchises with open arms.

Smashmouth football and success are a large part of the Steelers history and they are two aspects that Pittman himself personally identifies with. A tall, physical receiver, the USC prospect is a tough receiver who is willing to do whatever it takes to lead his team to victory.

“(I’m a) physical, tough, smashmouth football player that’s willing to do any job necessary to help the team win.”

Swann was a big piece of many tough Steelers’ teams from the ’70s and Smith-Schuster has also showcased his ability to be a smashmouth receiver over his first three seasons. With Pittman bringing the same skillset, it seems easy to understand why the Steelers would want to take a hard look at him during the pre-draft process.