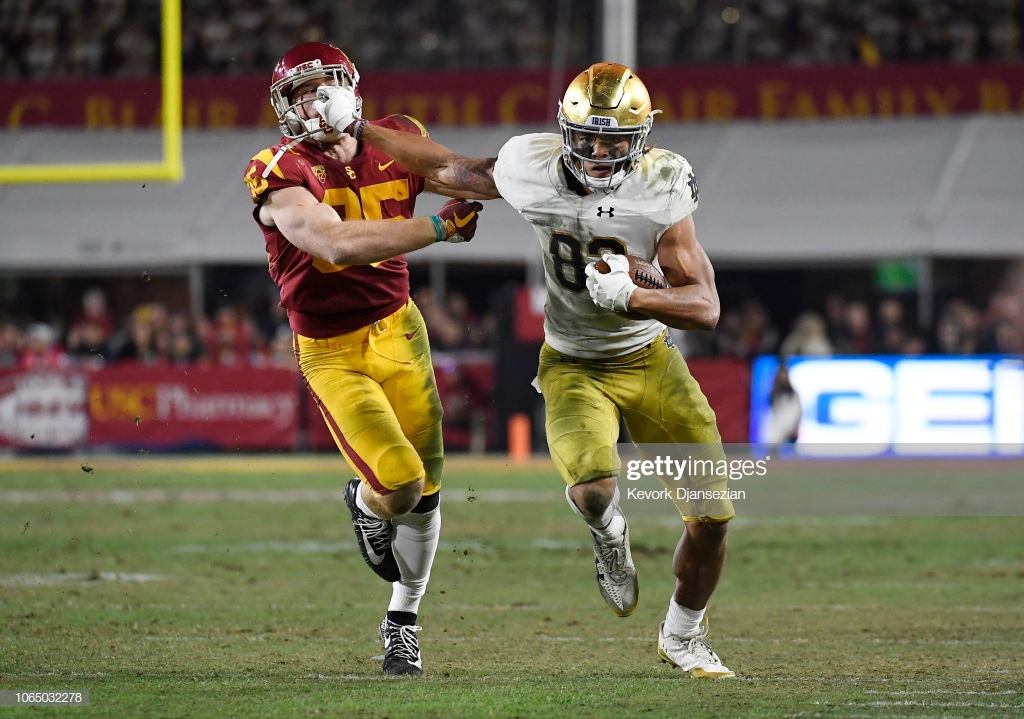 Chase Claypool answered many questions about his draft status during the Senior Bowl’s media day event. Mobile, Alabama will be one of the few remaining stops left before Claypool hears his name called during the 2020 NFL Draft. For the Notre Dame receiver, this has been a journey that has spanned many miles and even a few countries.

Claypool’s journey actually started north of the border in Abbotsford, British Columbia. Born in Canada, Claypool played high school football at Abbotsford Senior Secondary School and it did not take long until he was recruited by Notre Dame.

The adjustment from Canadian football to playing at Notre Dame could certainly be a tough one to make but it is an accomplishment that Claypool is very proud of. I asked just how important it was for Claypool to represent Canada at the Senior Bowl and he could not be more grateful for the opportunity he has earned.

“It’s really cool, not a lot of (Canadians) get the opportunity even though people have the talent so I’m pretty fortunate to be here but I’m just taking it all in,” Claypool told me.

There are a handful of differences between Canadian football and the NCAA. There is an extra down, the field is smaller and the ball is smaller but the biggest difference that Claypool noticed and enjoyed immediately was the difference in crowd size.

“Yeah, we’re trying to meet pretty soon here,” Claypool said when I asked him if the Steelers had met with him yet at the Senior Bowl.

The Steelers will surely be one of many teams that will be interested in the Notre Dame receiver. Claypool checked in earlier on Tuesday morning at 6’4”, 229 lbs with an 80” wingspan. Not only does he have the physical intangibles but he also has the production to back it up. He recorded 66 receptions for over 1000 yards and 13 touchdowns during his senior year.

Claypool’s numbers may speak for themselves but the senior receiver is out to prove first hand this week that he is the whole package. When asked what he wants to prove this week, Claypool did not have one trait in particular in his mind, instead he wants to show scouts that he can do it all.

“Just proving to the scouts that I hold the whole package in terms of route running, blocking, learning the playbook and all that stuff. So hopefully I can show that I am the whole package,” the Notre Dame receiver told me.

Though he may be set out to prove that he is the complete package, that does not mean that Claypool does not recognize room for improvement. He is candidly honest and realistic as he knows that he will face more man coverage at the next level than he did in college.

“Just separation, I know a lot of these guys are going to be playing man, more than I got in college so hopefully just work on that just a little bit,” Claypool responded when asked what areas he wants to improve in.

Claypool recognizes the obstacle in front of his path but he has shown a tendency in finding ways to overcome them. He tells me that he has been training out in California with numerous people in order to get his separation skills up to par for the next level.

“I have been doing a lot of position work with the guys I train with in California. So we’re just getting ready for that,” said Claypool.

He will have a huge opportunity to show just how hard he has worked this week in Mobile. The Senior Bowl may be the conclusion of a journey that Claypool started many miles and many years ago but with a great week of practice, it could very well be the starting point of another prosperous journey in the NFL.