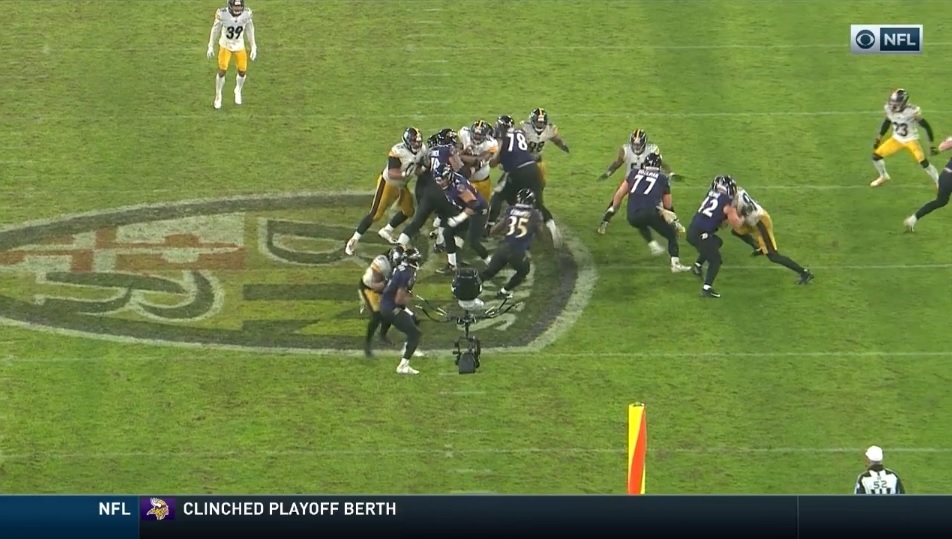 Hit the quarterback. Usually a phrase reserved for the pass game. But Pittsburgh took a different approach in Sunday’s loss to Baltimore, attacking the QB over and over again in the run game. They ran “mesh charge” to attack Robert Griffin III, though the success of the idea was ultimately pretty poor.

So what is mesh charge? Here’s the basics of the idea. To defend read option offenses, where the EMOL is unblocked and “read,” designed to be put in a lose-lose situation. If he shuffles down on the back, the QB keeps or throws the ball. If he keeps outside contain, the QB simply hands the ball off. The defender is frozen and always playing catch up in a never-ending game.

Mesh charge changes that equation. The EMOL will attack the mesh point/quarterback at full speed with this call. Every time. He’s not reading, he’s not reacting to the ball. He’s just going after the quarterback. The goal? Make the QB freeze up and make a hurried/bad decision. And make him pay each time this play is called and make the OC less willing to call option plays, knowing their QB may take a shot.

James Light, a tremendous football resource to follow on Twitter, recently posted a clip of a Kirby Smart clinic that broke down the concept.

One thing I think Lamar Jackson/Greg Roman are going to start to see is "Mesh Charge." Here is Kirby Smart w/ a great explanation of the technique. Teams like the Ravens/Packers started doing this to the Kaepernick/Roman. Leaves the QB open to big hits & can cause some bad reads pic.twitter.com/zb2QbA9xhj

“I get so tired of that defensive end surfing [being read]…I can’t stand that. Because I feel you’re being dictated to. That guy might be your best player and he’s going to be standing there and the quarterback is blocking him by looking at him. I’ll take my chances by giving up a run but at some point, someone’s gotta get their chin split open.”

Here’s an example of it from the college game, where everyone runs zone/read and defenses have to find ways to gameplan against it.

Clemson had some success with the "Mesh Charge" in week one. https://t.co/7uUomjVZ0I

And that’s what Pittsburgh was doing Sunday. On every snap the Ravens lined up in pistol and one of the Steelers’ OLBs were unblocked, they went with mesh charge and attacking the QB. Here’s a cut-up of every instance from this weekend.

Here’s an example of a traditional “read” against regular shotgun formation with the back sidecar. So this was primarily designed against pistol looks with the RB behind the QB.

Did it work? Well…no. Not really.

Based on my charting, the Ravens ran the ball 12 times for 86 yards, an average of 7.2 yards per carry, with a touchdown. The issue here is Baltimore had no issue just handing the ball off and getting Gus Edwards or Justice Hill downhill. With the LB attacking the mesh and the QB, he doesn’t have much of a shot on the RB, which still basically removes him from the run game equation. So now you’re short an extra man to try and defend the run.

But I don’t hate the idea. Especially when we’re talking future gameplans. When Pittsburgh faces Lamar Jackson next season, it’s worth bringing this to the gameplan again. I’d much rather have Mark Ingram, Edwards, or almost any running back carry the ball in space than Jackson, the NFL’s most dynamic and electric runner. Take him out of the game and make someone else beat you on the ground.

Of course, I bet Baltimore will be anticipating this in their 2020 matchups and even in-game, they were adjusting by having RG3 roll out or take off like he was carrying the ball, just to get him off the spot and directly out of the line of fire. But I appreciate the Steelers’ creativity here to try to slow down a potent rushing attack and diverse run scheme.