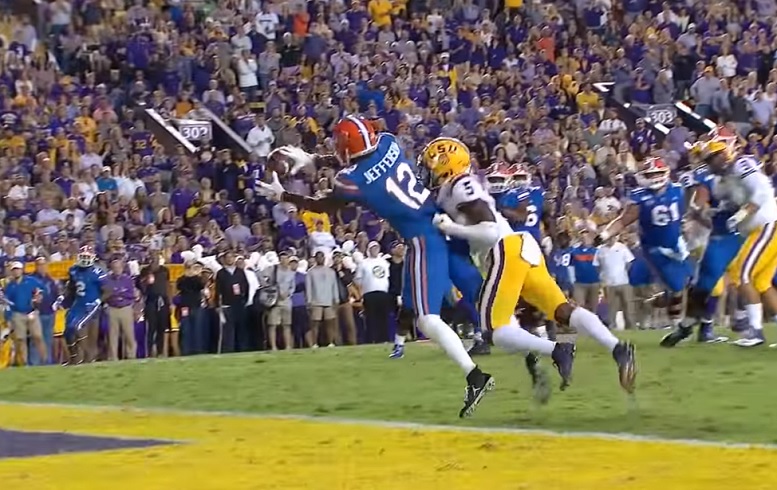 Florida wide receiver Van Jefferson is receiving a lot of positive buzz so far during the 2020 Senior Bowl in Mobile, AL and that’s not overly surprising for several reasons.

For starters, Jefferson is the son of Shawn Jefferson, who played 13 years in the NFL as a wide receiver and has coached in the NFL as a wide receivers coach for the Detroit Lions, Tennessee Titans, Miami Dolphins and currently the New York Jets. Additionally, Jefferson, who transferred to Florida from Mississippi after his sophomore year, caught 175 passes for 2,159 yards and 16 touchdowns during his college career.

With Jefferson seemingly impressing at the senior Bowl, I thought Wednesday night would be a good time to do a quick contextualization of his pass targets from five games this past season. The five games that I contextualized of Jefferson’s where Florida’s games against Tennessee, LSU, Georgia, Florida state and Virginia.

In total, Jefferson was targeted a total of 33 times in the five games I watched and contextualized. He caught 25 of those targets for 312 yards and five touchdowns. Jefferson’s average intended yards on his 33 total targets in this contextualization was just 8.7 yards and his average catch distance from the line of scrimmage was just 6.8 yards.

159 of Jefferson’s 312 receiving yards in the five games of his that I contextualized came after the catch for a 6.4 average. It should be noted, however, that 54 of those 159 yards after the catch came on one wide receiver screen against Virginia. Additionally, all five of Jefferson’s touchdowns in these five contextualized games came either at the goal-line or in the end zone and thus there was no opportunity for extra yardage on those five plays. He averaged 11 yards after the catch on the 19 other receptions, however.

I only charged Jefferson with one clear drop. And of the other seven incompletions his direction, two were uncatchable passes while three more were pass breakups by defensive backs.

In the five contextualized games, Jefferson did a fairly good job of gaining separation in shorter areas nearer the line of scrimmage on slants and underneath crossers. Not as much separation deeper down the field on his targets, however. He’s quick to the tuck and caught passes in all areas of the field. He seemingly has strong and dependable hands at the catch point. There are also a few combat catches in this contextualization on a few of his touchdowns. He also caught a few low passes on back shoulder throws that required him adjusting his body with the football in the air.

A deeper dive is still required on Jefferson, but these five contextualized games of his targets should give a nice baseline as to the kind of wide receiver he is. He projects to be a X receiver at the NFL level and likely to be drafted somewhere in the middle rounds as I don’t believe he’ll be selected in the first two rounds at first glance.