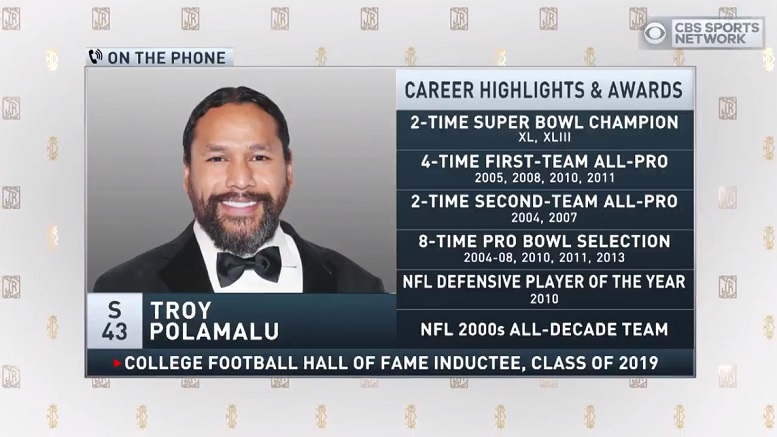 One week from now, we’ll find out if two former Pittsburgh Steelers, safety Troy Polamalu and guard Alan Faneca, will be members of the 2020 Pro Football Hall of Fame class. With that event close, there will be a strong push this next week to get both Polamalu and Faneca elected and some of that push is likely to come from very esteemed players who played against both players during their long careers.

On Saturday, New England Patriots quarterback Tom Brady made his push for Polamalu to be inducted into the Pro Football Hall of Fame this year via a statement that you can see and read below that comes courtesy of the Steelers PR Department.

Former #Steelers S Troy Polamalu is a finalist in his 1st year for potential induction into the Pro Football Hall of Fame (voting in one week from tonight). #Patriots QB Tom Brady offered this powerful statement re: playing against Troy: pic.twitter.com/wwUt9yqOcl

“One key to success for a quarterback is to study a lot of film in order to understand offensive tendencies and know how the defense will try to defend everything you are trying to do as an offense. But that never worked against Troy. He was one of the most instinctive and disruptive players I have ever played against. Outside of his incredible athleticism, his greatest skill was his unpredictability. You could never quite get a bead on what he was doing, yet, he was always around the ball. Troy was just a playmaker who you had to account for on every play. It was amazing to watch film on him and to try to understand how he knew where to be and when. If you wanted to find Troy, you just looked for where the ball was going and you would always find him.”

That’s quite a recommendation by Brady, who will be a first-ballot Hall of Famer himself after he finally retires. It’s also not like Brady throws out respectful comments such as that to former players on a regular basis, either. Because of that, what he said on Saturday should carry a lot of weight when it comes to the selection committee.

Brady isn’t the only former opponent of Polamalu’s to speak up on behalf of the former Steelers safety this offseason as former Baltimore Ravens linebacker Ray Lewis, who is already enshrined in Canton, OH, has as well and we wrote about that not too long ago.

“I’m telling you, man, just his ability to change games, right?” Lewis said of Polamalu recently. “I used to always say, the greatest ones find a way to change the game. Knowing I hated it, but had to respect it, right? And so when you talk about why the Hall of Fame for Troy, there are many kids, there are many people that would play this game that will hope one day that they had the humility and the passion to play the game, like Troy Polamalu played the game.”

'The greatest ones find a way to change the game.'

Hall of Fame linebacker @raylewis explains why #PFHOF20 Finalist @tpolamalu deserves to be in Canton. pic.twitter.com/rS4LbLsX41

Here is nearly 10 minutes of nothing but Troy Polamalu highlights from his career. Polamalu was named one of 15 modern-era finalists for the 2020 @ProFootballHOF class on Thursday.