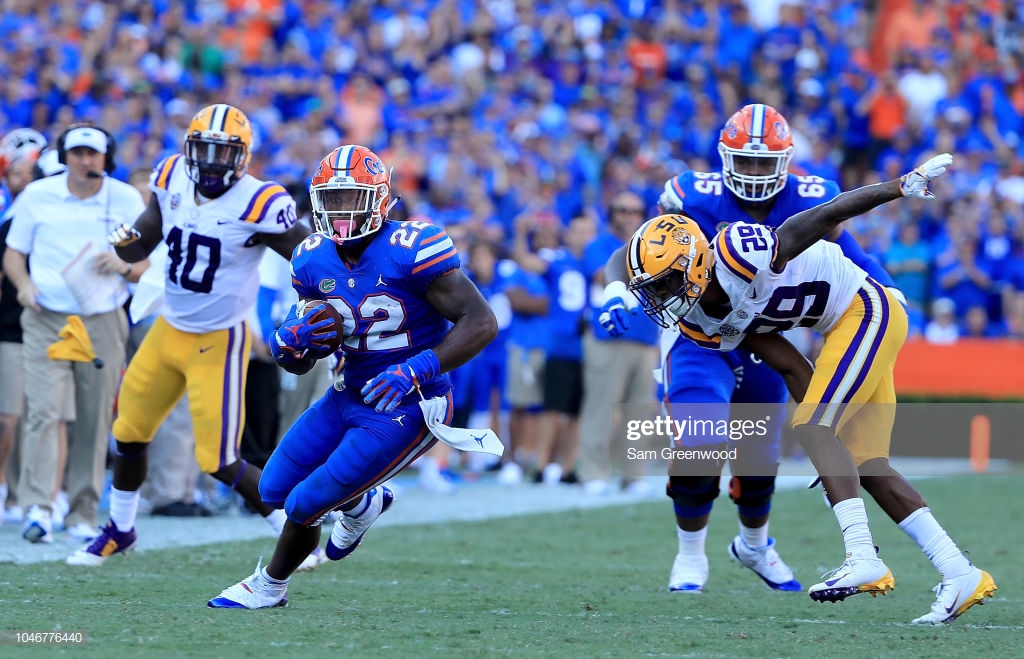 Lamical Perine will be a football purist’s favorite running back. The Florida running back represents all the traits that make running the football so enjoyable. He is a tough, downhill runner who racks up a body count as he takes out those in his path. He is not going to flash highlight reel juke moves but he is going to run over anybody who comes in his path. Do not look too much into his regression last season as the Florida offensive line really did him no favors. All of Perine’s yardage were tough and earned by his own accord.

For teams looking for a north to south runner who creates a lot of yardage after contact, Perine will be their guy. He may have dropped weight before his senior year but that did not affect his contact balance, which is one of his top traits. The Florida running back is a bowling ball on the field, knocking down those who decide to step into his path.

The senior running back is also tough as nails. You will not find a moment in which Perine came up short on a run. He always finishes and falls forward, which are traits that will surely be admired at the next level. Watch on the play below as Perine breaks one tackle near the line of scrimmage and is then able to create additional yardage by keeping his legs churning and by falling forward.

Perine has all the physical traits to be a tough, downhill running back but that is not all. He also has a handful of other intangibles that make him a talented running back. The Florida back comes equipped with above average vision as he is a very decisive running back. He wastes no time identifying the hole and getting into his running lanes.

Knowing how to set up blocks is also a very crucial requirement for the running back position and Perine shows that he has a great understanding of how to set up his blocks in order to wait for the perfect moment to strike. Watch on the play below as the Florida running back uses the pulling right guard to take out a defender in his path before heading up field. This is also yet another example of Perine falling forward and gaining a few extra yards after contact.

The final rushing trait that popped up on his tape was Perine’s ability to press the line of scrimmage and bait defenders into a hole before bouncing somewhere else. Not only does he show a good feel for manipulating defenders by pressing the line of scrimmage but he also has smooth lateral movement to maintain his speed as he finds a new running lane to run through. That is on display on the play below as he baits the Virginia defensive back into the hole before bouncing outside.

Another reason why teams should be interested in Perine is he has shown capable of being a three down back while at Florida. The running back really took off as a receiver last season, recording a career high 40 receptions. He also showed versatility with his receiving ability as Florida used him out of the backfield and split out wide. While Perine does not come down with the football on the play above, it still shows how effective of a receiver he can be out of the backfield. A very nicely run wheel route by the Florida running back, he will definitely be a handful for linebackers in coverage at the next level.

Perine’s ability as a pass protector definitely improved during his senior year as well. While this may not be a textbook pass protection rep below, it shows what teams will be getting should they draft him. Perine plays with a mean streak and is a very physical blocker. He gets a very impressive two for one block on the play below.

Due to his lack of athleticism or speed, Perine’s ceiling may not be as high as the other top running backs in this year’s class but that does not mean that he cannot be an effective runner at the next level. Just based off his vision, strength and toughness, Perine will be definitely be a guy who can carry the load at the next level. He will not be the flashiest running back but he will be one of the toughest and most reliable backs.

The best fit for him needs to be a system that plays to his strengths. Let him line up behind the quarterback, gain a full head of steam and let him run through opposing defenses. Put him in an offense where pulling guards are a norm as he knows how to use his blockers effectively.

Games Watched: vs Miami, vs South Carolina, vs Auburn, vs Virginia