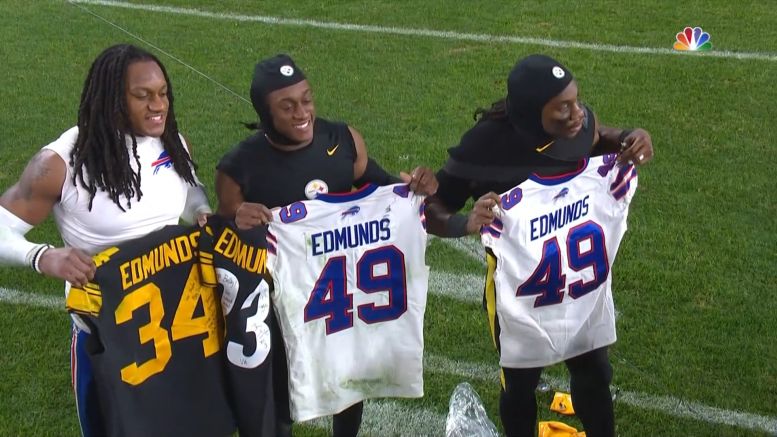 This isn’t the first time that the Pittsburgh Steelers have been involved in a battle of the brothers in recent years, though it’s been rare that one brother has had the opportunity to be on the field at the same time as the other. I don’t believe Trey Edmunds played on offense tonight, so Buffalo Bills linebacker Tremaine Edmunds didn’t have a chance to pop his older brother won.

But he clearly won the battle, and not just because the Bills won. Each of Tremaine and Terrell Edmunds led their respective teams in tackles on the night, the former with eight, the latter wight 11, but Tremaine’s was clearly more impactful.

The 21-year-old, the youngest of the three brothers, recorded five defensive snaps among his eight tackles, including one for a loss and two for no gain. He had a third for no gain that was negated by a defensive penalty. He also broke up a pass over the middle intended for Tevin Jones.

As for Terrell, he only had two successful tackles, one of them being a 12-yard gain on third and 15. He was also credited on the tackle on Frank Gore on third down on the Buffalo Bills’ final meaningful possession to force them to punt.

But more critically, he was seemingly the defender most responsible for covert to the right corner on the third-down touchdown to tight end Tyler Kroft, the former Cincinnati Bengal who had hardly been involved in the passing game all season for Buffalo. He was late getting over for the easy touchdown, which was the difference in the game.

Both Tremaine and Terrell were drafted in the first round in 2018 by their respective teams, though the former, the linebacker, went much higher than the latter, a safety. Both have been starters for pretty much their whole careers, but the younger brother has taken a bigger jump in his second season.

Tremaine Edmunds now has 105 tackles on the season in his second year with the Bills along with a sack and a half and one interception. As a rookie, he actually had two interceptions and two forced fumbles, in addition to 121 total tackles and two sacks. He has eight passes defensed this year, and had 12 last year.

Terrell Edmunds is up to 94 tackles on the season. The only other statistic that he has is three passes defensed. He had four passes defensed, including an interception, as a rookie in 2018, to go along with a sack and 78 tackles.