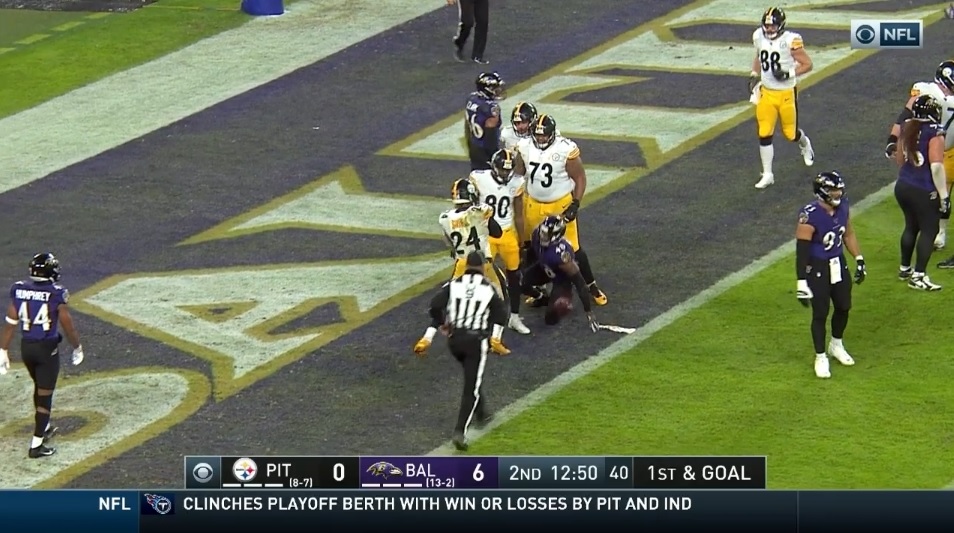 1. Knew It Was Coming, Couldn’t Stop It – You’re on the road against the top running team in the NFL who is resting their starting QB. You know what they want to do and you know how they do it. There was an obvious emphasis by Bud Dupree and J. Watt hitting the QB regardless of where the ball was and I was all for hitting him. But after the fourth or fifth time those defenders ran by the ball next to wide open gaps you think there would be some effort to change. That doesn’t need to come from the sideline. If someone keeps running by you for big gains aren’t you going to try to change your play?

2. Was T.J. OK? – All credit to the man he’s had a fantastic year but something seemed off with him today. Two more neutral zone infractions for him which has been an issue this season.  On a play in the backfield he punched at the ball without even thinking about the tackle when he’s usually so good at doing both at the same time. He was called or roughing the passer with a late forearm to the chest.  He just didn’t seem himself today.

3. Bush’s at His Best – On Baltimore’s second drive we may have seen the best sequence Devin Bush had all year. On the nine play drive Bush had 4 tackles that showcased his abilities. The first was a fill in the hole, followed by a scrape to his left I believe for a short gain, then a tackle on run up the middle and finishing with him getting outside on an end around where he got spun, fell to the ground, rolled on his back and was able to grab the runner. A total of 8 yards gained on those 4 plays to help hold the Ravens to a field goal. He finished with a season high 12 tackles. Good things to come from him.

4. Snettle Down – Benny Snell got the vast majority of the carries and had a good game with 91 yards and touchdown. His first two carries he seemed a little amped up and took the ball, wrapped up with two arms and put his head down pushing into the pile for 3 total yards. He settled down after that becoming more patient and using his vision to find the gaps particularly to the left side. After that he was 16 carries for 88 yards (5.5 yard average). Over 400 yards in his rookie year got him some good experience.

5. Did Ben Mask the Play Calling? – I’ve complained about Randy Fichtner’s play calling plenty of times this year and it got me thinking. Some have said that his play calling looks bad because of the young QB’s he working with right now. So does that make him successful ONLY with future Hall of Fame quarterbacks? Was Ben able to cover up for the bad play calling because he was able to audible out of bad calls? He’ll be back next year because Ben will be back but it makes me wonder for the future.

6. Failed Fade – I very much dislike the Fade route. Watt forced a Raven fumble and with the ball in Baltimore territory the Steelers moved from the 34 to the 13 on three Snell runs. On 3rd and 4 they called a fade to Diontae Johnson who almost made a great play but the play was unsuccessful. They got a first down by penalty and three plays later ran a fade to the other side to JuJu Smith-Schuster that was also unsuccessful. Statistically it’s the least successful route to run in the Red Zone. Running it with a rookie quarterback, a rookie WR and a WR who isn’t fully healthy makes it even less likely.  Google “NFL fade pass completion percentage” and you’ll see the glowing articles on the play. It doesn’t work.

7. Stone Cold John Harbaugh – Head Coach John Harbaugh showed what type of coach he is and some of us being Steeler fans may not like it but I think his players love it. And to be honest I have no issue with it whatsoever. A fake punt at your own eleven tells your team I trust you to execute this play and it tells future opponents you need to be ready for anything.  After the safety his offense came out with a bomb down the left side from a backup QB and a young, inexperienced WR that was incomplete. There was no need for him to call off the dogs. If you don’t like it, stop it.

8. Beautiful Boz – I can be superstitious so I held off from talking about Chris Boswell this year because I didn’t want to jinx him. After struggling with his health last year he came back and showed again why he is one of the best in the league. Perfect 28 for 28 on extra points and 29 of 31 on field goals with one miss coming from 54 yards against Miami and the other was on a bobbled snap against Cleveland. And there were very few that were iffy kicks near the uprights. The majority were dead, solid, perfect.  Great year for Boswell.

9. Learning Experience – The preseason high hopes were dashed early by the Ben Roethlisberger injury but this season was a learning experience for all of us. We learned Kevin Colbert isn’t afraid to make big moves even when the team is 0-2. We learned Mike Tomlin might be a better coach then some thought getting this team to 8 wins. The rookies, from Bush to the UDFA’s, gained a TON of experience in their first year and it looks like a very productive group from the draft. Despite falling short at the end it was an enjoyable year to watch and gives us something to look forward to for the 2020 season.

10. Is that it? – The Steelers have several major contributors at the end of their contracts? We finally got a break out season from Dupree and Javon Hargrave got a chance to show what he can really do. Tyler Matakevich is a major special team player and J. Finney has been a key backup for the offensive line. Was this their last game in black and gold? They’ve all put themselves in position to earn bigger paydays. You hate to see the good players go to other teams and the salary cap is always an issue and can only be manipulated so much.  If the must go, I hear the NFC is nice.