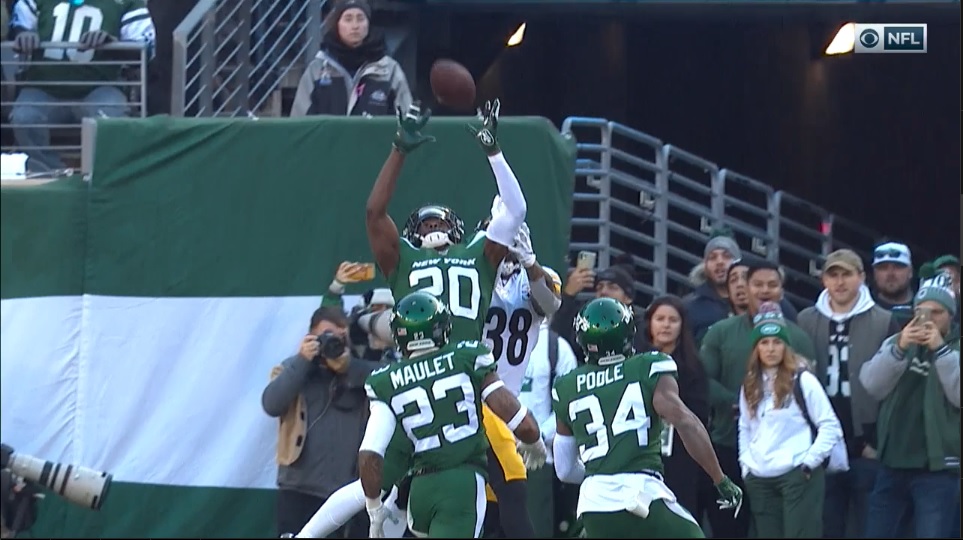 1. Snap, Crackle, Slop – Maurkice Pouncey was elected to the Pro Bowl again this year. He has been selected every year except 2013 when he only played one game. So why does he have such an issue with the shotgun snap?  This has been going on all year.  His first snap was fast and wide. His had a snap to Mason Rudolph that almost went over his head.  And to be fair he wasn’t alone J. Finney has some bad snaps as well.  To be a good team you have to do the little things right consistently.

2. Unlucky 13 – Over the past few weeks there was another ugly pattern developing and it was with the Steelers 13 personnel/Jumbo package. I understand the premise of trying to be physical and early in the year it had some success.  The opponents have adjusted and recently it has been terrible.  Here are some of the play results from the Jets game. Minus 1 yard, 1 yard gain, minus three yards on QB stumble, gain of three and a sack for minus 9 yards. There are times it should be used but not in the regular flow of the offense.

3. Two Hands, Joe – Joe Haden had the interception. He caught it with his hands (plural) and for some reason he decide to switch it to one hand and hold it out away from his body. What was a turnover became an incomplete pass. Gene Steratore later said on the broadcast it could have been challenged.  I don’t believe that would have been a winnable challenge but it shouldn’t have needed to be challenged at all.  Players love to use one hand maybe for highlight purposes, I don’t know. Three different Jets tried one handed catches, with one being successful, in the first half. Use both hands and tuck that away and you’ll still make the highlights.

4. Rudolph’s Shiny New Year – Like Yogi Berra once said, “It’s deja vu all over again.” A young quarterback started the game, played poorly and was replaced by another young quarterback who played well. Rudolph got the call after two early Devlin Hodges interceptions and gave the team a spark. He looked more decisive and got the ball out quicker and was playing well until he injured his shoulder. Maybe both QB’s prefer to come off the bench and be the spark guy.  I think the Steelers will bring in a veteran next year to fight for the backup job.

5. Watt More Do You Want? – Game in and game out J. Watt has been a playmaker on this defense. He is about as complete of a player as you will see in the NFL.  He has all the splash plays you could want. He has 14 sacks, 50 tackles, 33 quarterback hits, 14 tackles for a loss, 7 forced fumbles, 4 fumble recoveries, 2 interceptions and 7 passes broken up. What sometimes gets lost is his play against the run. The Jets ran the ball well early and Watt was a big part of slowing that down chasing down Le’Veon Bell from the backside on a couple plays. Stephone Gilmore has a good resume as well and may get the nod for the Defensive Player of the Year award but Watt’s season has been really impressive.

6. Defensive Focus – It’s no secret that there is a great divide between the effectiveness of the offense and defense on this team. It would be easy for this defense to get frustrated by the lack of effectiveness by the offense. We haven’t seen that at all. They have been steadfast in their support of the team as a whole. They have consistently done their part with the sacks and turnovers. They have held opponents under 17 points in 5 straight games and 9 of the last 12. They’ve given the team a chance every week and it makes you wonder what might have been.

7. Everybody Doesn’t Need to Play – The last two weeks the Steelers have had 5 running backs active and I don’t think that is conducive to them being as productive as they could be. There is no flow to the rotation. James Conner was running well but he got injured so that may have thrown a wrench in the plans this week. Snell is a mudder.  He gets better with more work and primarily running him in the unsuccessful 13 personnel isn’t helping.  Jaylen Samuels is the receiver of the group and can make plays their but they continue to try to run him. Kerrith Whyte’s role is not yet completely defined but looks like the change of pass back. Better role definition could lead to better results.

8. Return Addressed – The special teams return game has been a pleasant surprise recently. With today’s returns Diontae Johnson now has 18 punt returns for 224 yards including the 85 yard TD. Even if you take that out he’s still averaging a respectable 8.2 yards per return. Whyte now has 12 kick returns for 240 yards and he really looks like he’s close to breaking one. Maybe he can finish the season with a big one. A nice improvement over how they started the season.

9. Consistently Inconsistent Officiating – This could really be a weekly thing to talk about but this time it was a somewhat obscure call. Last week, while preparing to snap the ball to the punter Steelers long snapper Kameron Canaday lifted his head. A common move by long snappers. This caused a Bills player to jump offside which would have given the Steelers a first down yet Canaday was called for false start. This week a similar scenario happened with the Jets long snapper moving his head and Snell coming off side. The Steelers were penalized this time for a neutral zone infraction. Same play penalized two different ways. We need some clarification on the rule here and consistency of how it should be called.

10. Lack of Originality – No, I’m not going to talk about the play calling this time I’m going to talk about the celebrations by defensive opponents. In the last two games we’ve seen someone mimic the Watt celebration after a nice defensive play. It may have been Jordan Phillips in the Bills game and I believe it was Jamal Adams in this game. I’m all for someone celebrating a big play but mimicking someone else’s just make you sophomoric. Come up with your own celebration, Man. You do you.