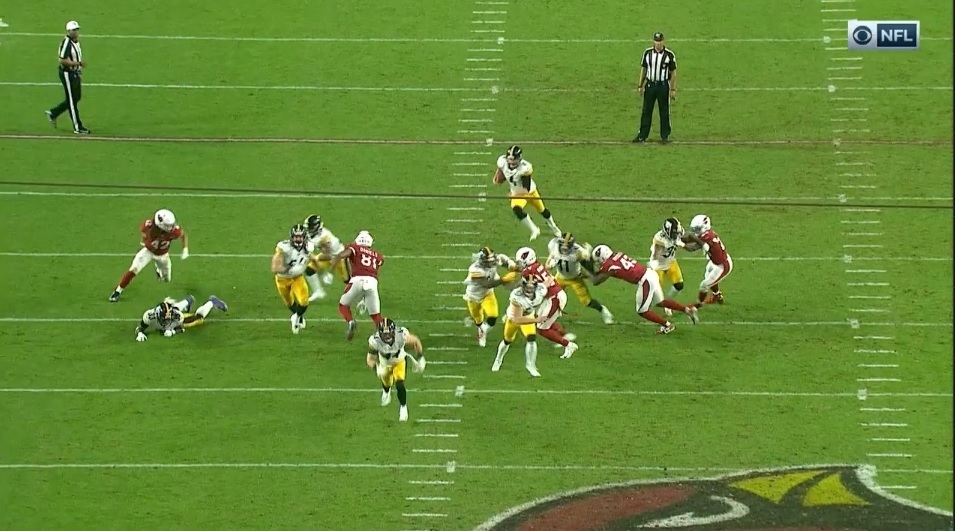 If it wasn’t for the infamous Colts’ “fake” punt against the Patriots four years ago, I would safely and confidently call what I saw Sunday evening the worst fake punt of the decade. Maybe ever. Still, Jordan Berry’s “fake,” which amounted to him running straight into a pair of Cardinals’ rushers, was a disaster. And it was one of the first things Mike Tomlin was asked about in his post-game press conference. Tomlin said it was a called fake and took responsibility for the result.

“Called by me,” Tomlin told reporters. “They had a six man box. They had one gunner viced, they had two returners deep. We had decent numbers. We worked it during the week. But they executed it better than we did. Kudos to them.”

Tomlin went on to say Berry doesn’t have the ability to check out of the fake.

Here’s a look at it. It’s never a good thing when the opponent you’re facing is tweeting videos of your fake punt.

Arizona forced the fumble and got the ball over on downs. That led to a David Johnson 24 yard TD catch to make it a one-possession game, cutting the Steelers lead to 20-17. Pittsburgh had an ensuing 11 play, 77 yard drive to tack on a field goal while the defense closed things out the rest of the way.

Berry offered a little more insight in the locker room that seems to make better sense of the situation. According to ESPN’s Brooke Pryor, the fake was called off but Berry didn’t get the signal.

Jordan Berry said the Steelers called a fake punt and then someone called it off, but he couldn’t hear it. Just a miscommunication.

It was likely called off by personal protector Jordan Dangerfield, the QB of the unit. But Berry clearly didn’t get the message, the one man still believing there was a fake coming. That’s how you get lowlight reel plays like that one.

Ultimately, it didn’t cost the Steelers the game. Let’s just hope we never see something like that again.