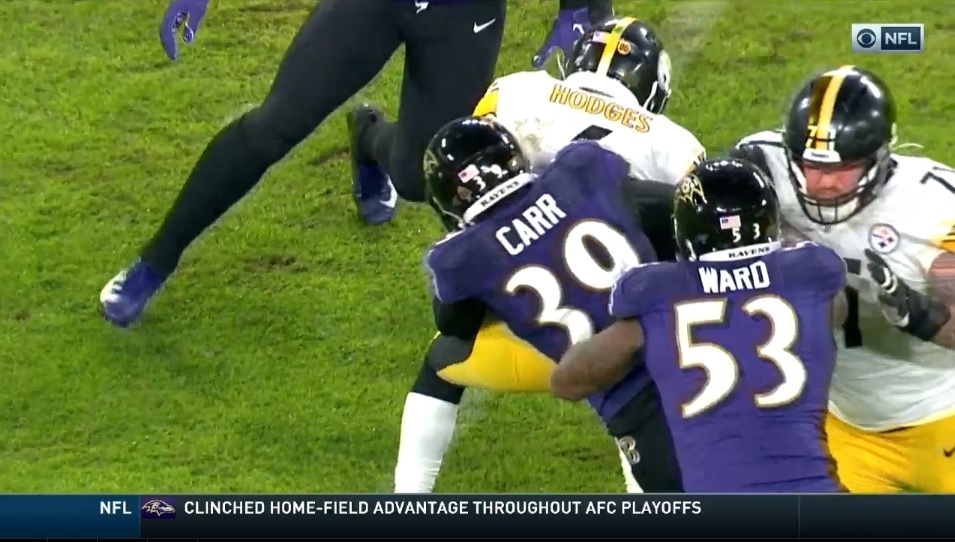 Of all the surprises this season, maybe none rise above the meltdown that was the Pittsburgh Steelers’ offensive line of the final three weeks of the season. Against Buffalo, the Jets, and Ravens, the offense had no answer for overload LB/DB blitzes. And they paid the price, causing their QB play to tank, their offense to reach new lows, and ultimately end their playoff hopes.

In his post-game press conference after Sunday’s loss to Baltimore, Mike Tomlin predictably said the issue wasn’t limited to just one unit but noted schematically, the team wasn’t put in position to win.

“It’s all of us,” he told reporters. “We gotta protect better. We gotta get open. We gotta make quick decisions. We gotta put them in better schematic opportunities.”

Devlin Hodges was only sacked twice against the Ravens but pressured numerous times, leading to a pair of intentional grounding penalties, one resulting in a safety.

Over the final three games of the season, Mason Rudolph and Hodges were sacked a total of ten times. It’s all the odder given pass protection was strong for long stretches of the season. From Week 1 to Week 9, Steelers’ QBs were sacked eight total times. Over the second half of the year, that number spiked to 24.

Don’t chalk it up to throwing more either. Numbers don’t tell that story.

The only explanation is that Buffalo exploited a weakness, being able to send overload blitzes the Steelers weren’t ready for and young QBs like Hodges and Rudolph didn’t have the experience and ability to alter protections to pick them up. The Jets and Ravens copied and pasted that gameplan and the Steelers never properly adjusted. That falls on first year offensive line coach Shaun Sarrett, who was doing reasonably well prior to the Bills game. Then things fell apart. It’s now fair to at least question his role going forward, even if it’s unknown if the team would actually make a change after just one season.

There figures to at least be some new faces in the room come 2020. Ramon Foster’s future with the team is in serious doubt. BJ Finney is slated to become a free agent. And depth has been chipped away after Fred Johnson and Patrick Morris were claimed by other organizations. At the least, the team will draft at least one linemen in the upcoming draft, perhaps on Day Two, to bolster a group who needs reinforcements for the first time in awhile.