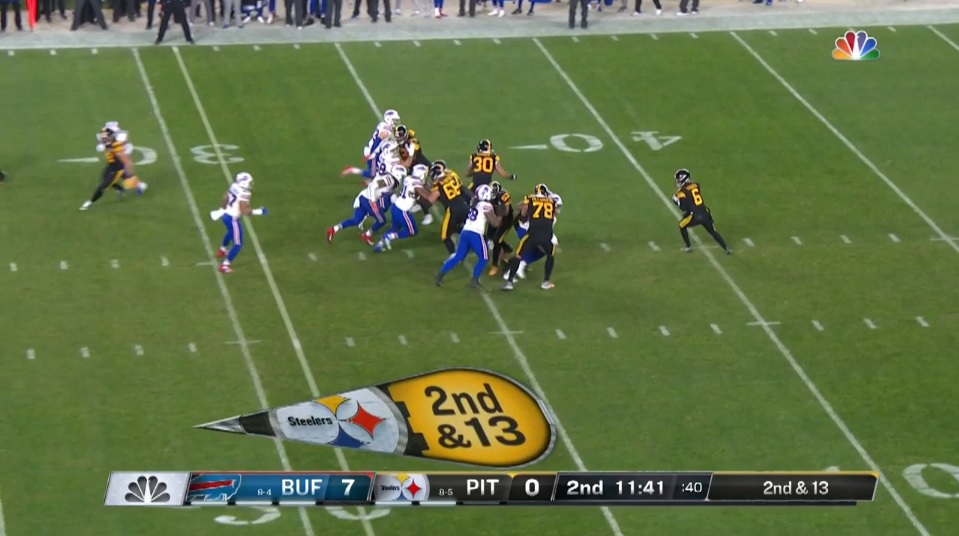 Mike Tomlin knows the Steelers must run the ball better. But not running it enough? He blames that on the scoreboard, not the game plan.

During his Tuesday press conference, he was asked if the team relied too heavily on the passing game, repeatedly throwing against an elite pass defense that would intercept Devlin Hodges four times.

“You know, you’re going to pass more when you lose,” Tomlin told reporters. “And so that’s just the reality of it. We didn’t anticipate it being that way, but we didn’t anticipate not being in control of the game through the latter part of the third and fourth quarter. So it was what it was. That’s not how we like to function, particularly under the current circumstances in terms of our youth and inexperience at quarterback and receiver. But that’s how the game unfolded.”

There’s a kernel of truth there. Pittsburgh was forced to throw late in the game, their final two drives, down one score and time running thin. But it doesn’t explain everything. Here are the Steelers and Bills pass/run rates immediately after Buffalo took a 17-10 lead with eight minutes to go.

Throw out all the playcalls after Buffalo went up 17-10 with eight minutes left. Each teams run/pass ratios prior to that:

Bills were true to their identity. Ran it more often, ran it more successfully.

Pittsburgh was throwing it nearly two-thirds of the time. Buffalo running it more than half. That has nothing to do with the score, game circumstance, and the Steelers didn’t even have a two-minute drill at the end of the half to artificially inflate the numbers.

Coming into the game, everyone knew the winner of this matchup would be the team who ran it better. Pittsburgh’s three-game win streak saw them running for over 120+ yards in each game. Some of that can be attributed to having a lead but you don’t churn out 80+ yards in your four minute offense. Pittsburgh had been committed to running it – and running it well – in each of those games. That’s the blueprint for success with young QBs and the #1 goal being not turning the football over.

Against the Bills, Pittsburgh got away from that approach.

Running it won’t be any easier this weekend. They’ll face a Jets’ unit that is #1 in stopping the ground game, giving up a measly 3.3 yards per carry and 88 yards per game. And that’s after the Baltimore Ravens ran all over them to the tune of 218 yards and nearly 6.5 yards per pop. Up front, the Jets are lead by a familiar face in NT Steve McLendon, who began his career with the Steelers, playing for them from 2009-2015.