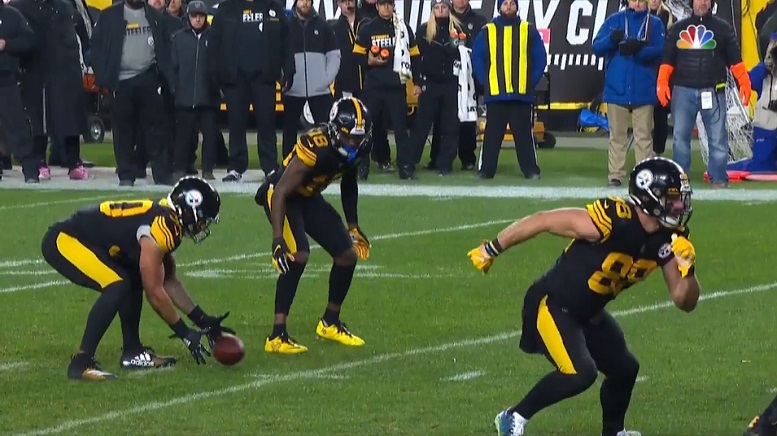 A lot is being made recently of some low and off-target snaps by Pittsburgh Steelers center Maurkice Pouncey and on Tuesday during his weekly press conference head coach Mike Tomlin was finally asked to comment on that topic.

“You know, Pouncey has always had a couple of low snaps,” Tomlin said. “You guys never ask about them because Ben [Roethlisberger] would just one-hand them and go about his business, you know. But Ben isn’t playing quarterback, so it’s kind of become more of a story. We’ve gotta minimize some of that negativity and he’s a part of that, but also the guys on the other end of it to minimize it is a part of it as well. And I kid you not, he’s always been capable of a low snap or two, but Ben’s hands are so good and so fluid that you don’t even really think about it.”

Tomlin’s not wrong as Pouncey has forever been the king of the low or off-target snap and that has resulted to quarterback Ben Roethlisberger becoming the king bad-ball catcher, if you will. It doesn’t make it fine, however, and Pouncey needs to make a more concerted effort to get better with his snaps regardless of who is receiving them from him.

Pouncey was recently asked about a few bad snaps of his after the Steelers Week 6 road game against the Los Angeles Chargers. One of those bad snaps got loose from quarterback Devlin Hodges and thankfully the rookie was able to scoop up the errant football and throw it away out of bounds to save red zone field position.

“He looked like Ben,” Pouncey said of Hodges regarding that play against the Chargers. “I told him, ‘I appreciate you, man.’ I was up there, talking trash, and he hurried-up snapped it. I was like, ‘Oh crap.’ But he did a hell of a job of getting that ball and throwing it out. I honestly thought in my head, ‘That’s Ben.’ Ben would’ve done the same thing. It was awesome.”

Pouncey had a low snap in Sunday’s loss to the Buffalo Bills to a non-quarterback that started a Wildcat play that ultimately ended in disaster. That low snap was picked up off the ground by running back James Conner, the Wildcat quarterback on the play. Conner then attempted a read-option mesh point with rookie wide receiver Diontae Johnson, who had lined up sidecar in the backfield, before ultimately giving up the football.

Johnson, however, then had the football punched out of his control by Bills defensive end Trent Murphy and it resulted in a Buffalo fumble recovery and a Steelers red zone turnover with right at around two minutes remaining in the first half with Pittsburgh trailing by four-points. Tomlin highlighted that play as being a significant one earlier in his Tuesday press conference.

“At the end of the first half we got a turnover and put our offense on the short field and they got a subsequent turnover and we came away with no points,” Tomlin said. “And I thought that was significant when we fumbled the ball there in the red area.”

Would an on-target snap have changed the outcome of the red zone Wildcat play that resulted in a Steelers turnover? It’s hard to say for sure but the low snap certainly didn’t help things out on that play, and it may have resulted in Conner and Johnson sort of panicking.

With Pouncey’s off-target snaps now being more in the forefront with two games remaining, we’ll have to wait and see if thy improve in the team’s remaining games. They need to.