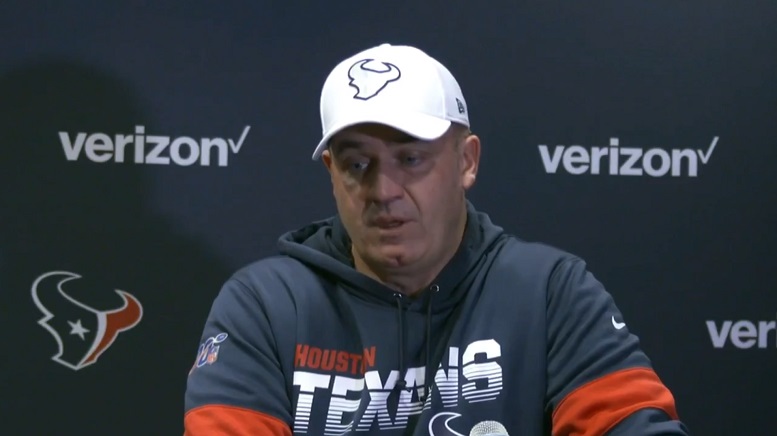 The Pittsburgh Steelers 2019 playoff chances took a big hit on Sunday when the team lost their road game to the New York Jets. Because of that loss the Steelers now no longer fully control whether they’ll make the playoffs this year as a Wild Card team.

While there are a few Week 17 scenarios that will allow the Steelers to make the playoffs in Week 17, all of them include the Tennessee Titans losing on Sunday to the Houston Texans, who might not have anything to play for in that game come kickoff time. However, on Monday Texans head coach Bill O’Brien was adamant that he’ll play to win the game against the Titans no matter what transpires in the early Week 17 game between the Kansas City Chiefs and the Los Angeles Chargers.

“Look, I think anytime we take the field, based on what we’re all about, our program and what we’re trying to do here and what we’ve been trying to build for six years, we’re about trying to win,” O’Brien said, according to Aaron Wilson of The Houston Chronicle. “It’s all about the game, it’s all about trying to win games. We realize all those things you just said are very important factors to take into relative to where we’re at, but we need to play to win the game.”

Should the Chiefs beat the Chargers in early Week 17 game action on Sunday, that would lock the Texans into the No. 4 seed in the AFC and thus their game against the Titans would essentially be meaningless. While O’Brien is saying all the right things that can be considered music to the ears of Steelers fans, there’s no guarantee that he wont ultimately change his mind.

While 53-man rosters in the NFL dont provide much leeway when it comes to resting many starters, the Texans could ultimately decide to at least sit their top two offensive players against the Titans, quarterback Deshaun Watson and wide receiver DeAndre Hopkins, should the Chiefs beat the Chargers Sunday afternoon.

The Texans might be without wide receiver Will Fuller against the Titans due to injury as he left the team’s Saturday game against the Tampa Bay Buccaneers with a groin injury and never returned.

The Texans beat the Titans 24-21 in Week 15 and on the road? Can they do it again in Week 17? Las Vegas doesn’t seem to think so as the Titans closed Sunday night as 5-point road favorites over the Texans. Since then, the line has grown at several betting establishments by as much as one point.

If the Titans beat the Texans on Sunday in Houston they will be the No. 6 seed in the AFC. Should the Titans lose to the Texans, however, the Steelers would be final AFC Wild Card team if they beat the Ravens. If both the Titans and Steelers lose next Sunday, Pittsburgh can still capture the No. 6 seed in the AFC if the Indianapolis Colts beat the Jacksonville Jaguars and the Oakland Raiders lose to the Denver Broncos. If the Raiders to beat the Broncos in that scenario, the Steelers can still make the playoffs over Oakland if they finish tied or better in the strength of victory stat.