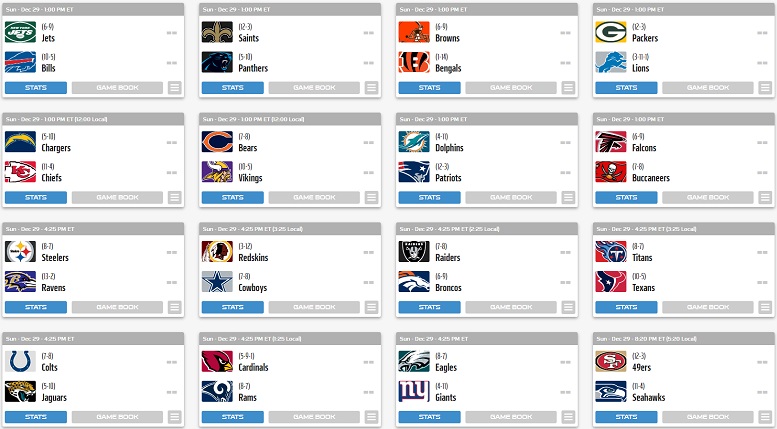 The Pittsburgh Steelers can make the playoffs as the No. 6 seed in the AFC should they get some help in at least one other stadium than the one they’ll be playing in on Sunday. While the Steelers not controlling their own destiny certainly isn’t great, they still have a few scenarios that will allow them to make the playoffs in Week 17 regardless of if they win or lose. Ahead of their Week 17 road game against the Baltimore Ravens, the Steelers could maybe use a little bit of help so there’s several early Sunday games worth paying close attention to if you’re into doing more scoreboard watching. So, with that, here’s a look at a few other games Steelers fans might want to pay close attention to on Sunday and how they might want to root in each.

Regardless of what the Steelers do Sunday against the Ravens, all scenarios that result in Pittsburgh making the playoffs as the No. 6 seed in the AFC included the Titans losing to or tying the Texans on the road Sunday afternoon. The Texans, however, are reportedly set to rest as many key players as they can on Sunday against the Titans and especially on the offensive side of the football, because they are locked into the third or fourth AFC seed. Keep your fingers crossed that the Titans find a way to screw this give-me game up. If the Titans beat the Texans, the Steelers 2019 season is done. Should the Steelers beat the Ravens and the Titans lose to or tie the Texans on Sunday, Pittsburgh will be the No. 6 seed in the AFC.

A Raiders loss to the Broncos on Sunday could also get the Steelers into the playoffs should they and the Titans both lose, and the Colts beat the Jaguars. In short, a Sunday loss by the Steelers, Titans and Raiders, when combined with a win by the Colts, would result in a three-way tie that the Steelers would win via the tie-breaking process. Should, however, the Raiders beat the Broncos on Sunday, the Steelers can still beat Oakland in a four-way tie via the strength of victory tiebreaker and such a process would require four other games to go their way on Sunday. Those four other games are below.

The Patriots are attempting to lock up the No. 2 seed in the AFC on the final week of the 2019 regular season against the Dolphins and Steelers fans should probably not root them on in their efforts. Should a four-way tie between the Steelers, Titans, Colts and Raiders develop on Sunday, a Dolphins win will be needed as part of Pittsburgh winning the strength of victory tiebreaker.

Yes, Steelers fans will need to pull for the Chiefs to win their regular season finale against the Chargers should a strength of victory tie-breaking process ultimately be needed to break a four-way tie to decide the No. 6 seed in the AFC. With it looking like the Texans won’t be worried about what the Chiefs do on Sunday, Steelers fans might as well pull for Kansas City just in case the extreme is needed.

A Packers win over the Lions on Sunday will be needed by the Steelers should a strength of victory tie breaker process be needed as a result of Pittsburgh and Tennessee both losing on Sunday and Oakland and Indianapolis both winning. The Packers have something to play for on Sunday, so odds are good they’ll beat the Lions.

The Bears and Vikings will play early on Sunday and Steelers fans might want to pull for the home team in this one. A Vikings win will be required as part of the Steelers winning a strength of victory tie breaker with the Raiders, should one ultimately be needed. 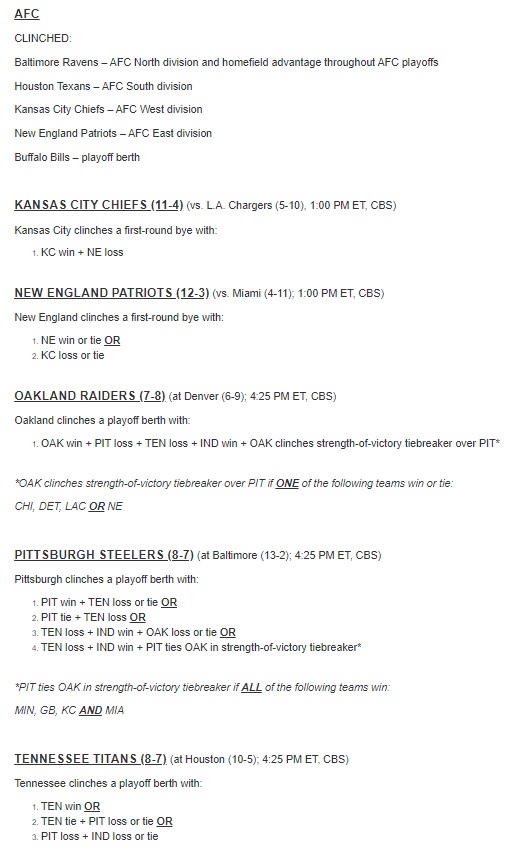