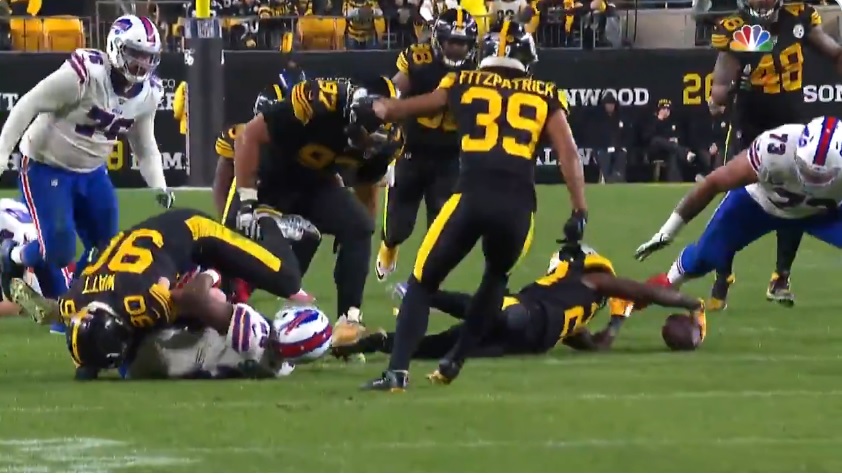 Winners and losers from the Pittsburgh Steelers 17-10 loss to the Buffalo Bills Sunday night.

Cam Heyward – Grown man game from Heyward. On one series, he tracked down QB Josh Allen in the open field, stuffed the RB the next, then got pressure to force the third down incompletion and punt. Literally took over the drive. Won early, won often, and a reminder of how good he is.

James Conner – Conner looked spry in his return to action though the Steelers predictably were careful with his workload. But with the ball in his hands, he ran with explosiveness, ability to make people miss, or just go through them, just as he did through CB Kevin Johnson on his TD catch. He’s the most talented back on the roster and it isn’t close.

TJ Watt – Another takeover game from a guy who’s done it all year long. His stat line? 4 tackles, 2 pass deflections, 1 forced fumble, and half a sack. Got close on a couple other rushes. An easy top contender for Defensive Player of the Year.

James Washington – Washington could’ve had a bigger game if Devlin Hodges threw him a couple better balls but he cashed in with a 35 yard reception, a really nice adjustment backwards to the ball. Consistent, big-play machine since the bye week and it’s great to see him come into his own. He finished the day with five catches for 83 yards.

Pass pro vs stunts/blitzes – Pass protection not very good tonight. Bills are a handful and they throw the kitchen sink at you but Pittsburgh simply wasn’t ready. Nowhere was that more evident than when Matt Feiler came off the DE to try and block a blitzing safety, leaving the DE free to drop Hodges. One of their worst showings from a pass protection/communication standpoint. Lot to look at on the All-22 this week.

Randy Fichtner – Largely for the terrible playcall that was a Wildcat run on the goal line late in the half. Asking James Conner and Diontae Johnson to work the mesh was just dumb and an unnecessary risk. Directly cost them points, and no, Maurkice Pouncey’s bad snap didn’t help but the play didn’t fail solely because of it. Instead of, at worst, going into the half being down 7-6, they were down 7-3. Would’ve had the chance to “double dip” as they’ve done so many times this year.

Calling 12 personnel on 4th and 7 late in the fourth quarter won’t go down as one of my favorite decisions either.

Devlin Hodges – Plain and simple. Bad game for Duck. Line didn’t help but his ball placement was consistently poor, the second INT by Tre White was horribly placed, and nearly every completion tonight felt like a struggle. Too many reads and throws were late. By far his worst outing. All he had to do was take care of the football, that’s the offense’s #1 goal, and he didn’t.

Jordan Berry – Berry has had a really impressive season. Tonight didn’t keep that trend going. He joins the trend of “worst game of the season.” Got the pity party started with a 22 yard shank that put the ball on Pittsburgh’s 40. Short field that set up a Bills’ TD and was for all intents and purposes, a turnover. He would follow that up with a 39 yarder out of bounds later in the game.

Terrell Edmunds – Not the easiest play for a safety to make but Edmunds has to at least make the Tyler Kroft TD competitive. Only route to his side to defend and he didn’t. Like we’ve said, and it’s obvious, put him in space and you have problems.