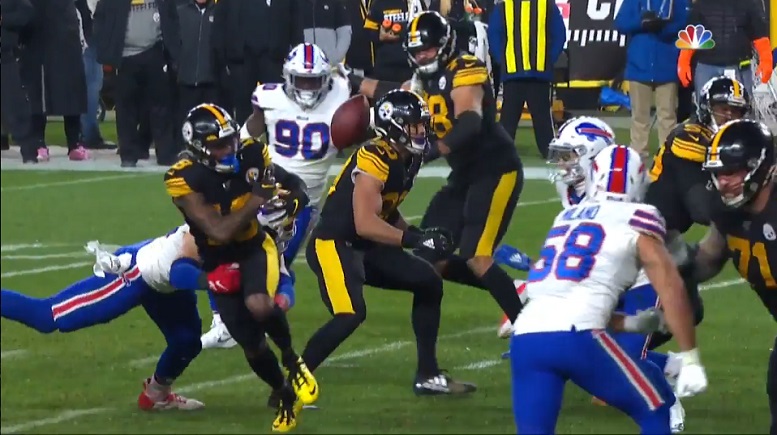 The Pittsburgh Steelers only ran the football 15 times in total Sunday night against the Buffalo Bills and that certainly wasn’t enough based on the pregame analysis that pointed to them likely needing to run quite a bit and successfully against a defense that has been very good against the pass this season. Not only did the Steelers offense only register 15 runs Sunday night, two of those were Wildcat runs and both had horrible results as did another attempted one as it was wiped out by a penalty.

The Steelers first Wildcat play Sunday night, a direct snap to running back James Conner with 10:11 left in the first quarter, looked initially like it was a fine play call on a second and 10 as it gained 7 yards. However, Steelers quarterback Devlin Hodges was flagged on that play for illegal motion and in turn a third and 3 opportunity quickly turned into a second and 15 situation.

That penalty on the Steelers offense quickly led to the drive disintegrating as Hodges threw his first interception of the game two plays later. So, what initially looked like might be a promising drive for the Steelers offense was ultimately wiped out by a Wildcat play that included a nonsensical and avoidable penalty.

The second use of the Wildcat by the Steelers offense also didn’t go well at all. That play happened on a first and 10 from the Bills 28-yard-line with 12:29 left in the second quarter. This time Hodges was not asked to motion. Instead he was lined up out wide near the right sideline and running back Jaylen Samuels was the quarterback behind an offensive line that included Zach Banner playing left tackle and Alejandro Villanueva playing tight end on the right side along with Nick Vannett. The Steelers ran a power Wildcat run to the right with left guard Ramon Foster pulling to that side. The Bills defense, however, blew that run up quite easily as Foster and Vannett both had their blocks defeated.

The Steelers third and final use of the Wildcat Sunday night against the Bills wound up being super disastrous. This time the Steelers used it two plays into a drive that started deep in Bills territory following a turnover. With 2:00 left in the first half and the football at the Bills 10-yard-line, Conner received a bad low snap from center Maurkice Pouncey and with Foster again pulling left to right, a read-option type of handoff was attempted to wide receiver Diontae Johnson, who had lined up as a sidecar in the backfield. The mesh-point did not seemingly go smooth between Conner and Johnson and if that weren’t enough, Bills defensive end Trent Murphy blew up the play and knocked the football loose from Johnson in the backfield in the process. The Bills recovered the football at their own 9-yard-line.

At worst, that Steelers offensive possession should have resulted in 3-points. Instead, the Steelers came away from their great field postilion with nothing, which was a crushing blow for a fragile offense that’s struggled to score points this season.

Conner talked briefly about that disastrous Wildcat play turnover after the game and why it wound up as a turnover.

“A little bit of the mesh, little everything,” Conner said. “Just, he (Johnson) didn’t have enough time to secure the ball before the defender got his arm in there.”

After the game was over Steelers head coach Mike Tomlin was asked during his post-game press conference to explain why the offense went back to the Wildcat a third time late in the first half after having the first two instances of it not go well earlier in the game.

“We’ve been living in that world for weeks, you guys know that,” Tomlin said.

That Wildcat world the Steelers have been living in for weeks has mainly included Samuels functioning as the Wildcat quarterback, not Conner. The fact that Conner was used in that role after missing the last three weeks due to a shoulder injury was one big surprise with the other one being Johnson being the one lined up in the backfield and ultimately receiving the handoff on the play late in the first half.

Yes, the Steelers used the Wildcat with success earlier in the season against the Cincinnati Bengals. Since then, however, the success rate of the Steelers Wildcat has gone down in its limited usage that began again a few weeks ago against the Cleveland Browns. The Steelers now have two regular season games remaining and they’ll likely need to win both to make the playoffs. Hopefully we won’t see much, if any, Wildcat in those finally two games because the Steelers offense seemingly isn’t surprising anyone with it since Week 4. It needs to be put back in the bag for the remainder of the season.