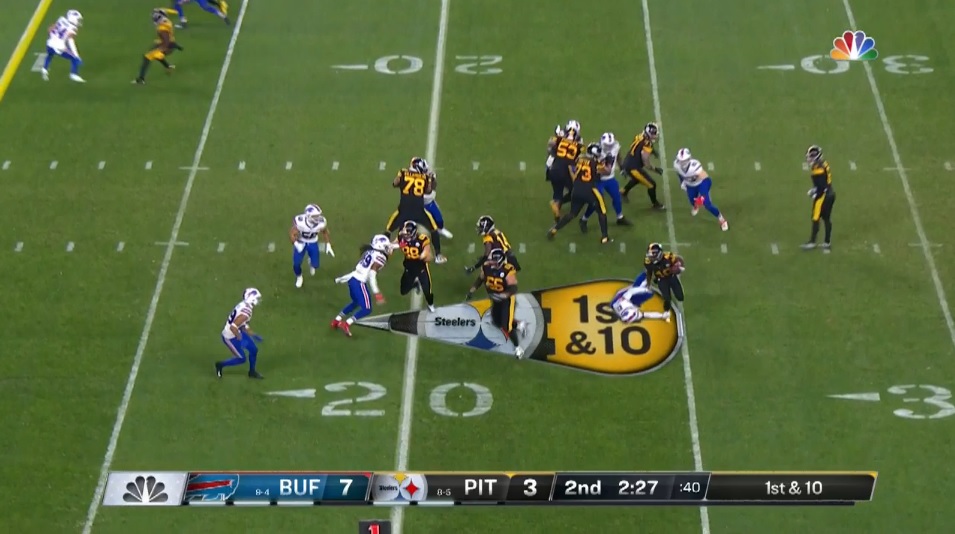 Against the Cincinnati Bengals in late November, we raved about the Pittsburgh Steelers’ power run game. That day, they ran it 15 times for 90 yards, an average of exactly six yards per carry.

It seemed like Buffalo could be a recipe for the same success. It wasn’t. Not even close.

For starters, the Steelers ran power, a basic run scheme with the backside guard pulling and deuce (double-team) block frontside, just four times versus the Bills. To be fair, it’s reasonable they scrapped it. Each time, the play went nowhere, and things weren’t blocked well across the board.

That two yard play, by the way? The Diontae Johnson fumble at the end of the first half. One of the most damaging plays of the game, taking points off the board in a low-scoring contest.

Oddly, Ramon Foster was asked to pull three of those four times, netting -1 yard. David DeCastro pulled once for no gain. DeCastro is the more athletic player, clearly the better puller, and the fact they used Foster more is curious at best.

Of course, the Steelers didn’t have much success on the ground in general, generating only 58 yards on a measly 15 carries. Buffalo came in with the league’s 21st ranked run defense but you wouldn’t know it by the way they performed Sunday night.

Ramon Foster was blunt and accurate in his assessment of the offense’s performance in the locker room immediately after the game.

As good as the defense is, they won’t go far without the offense being at least average. And the offense can’t get to that level without a consistent run game that thrives when its guards are able to get on the move.