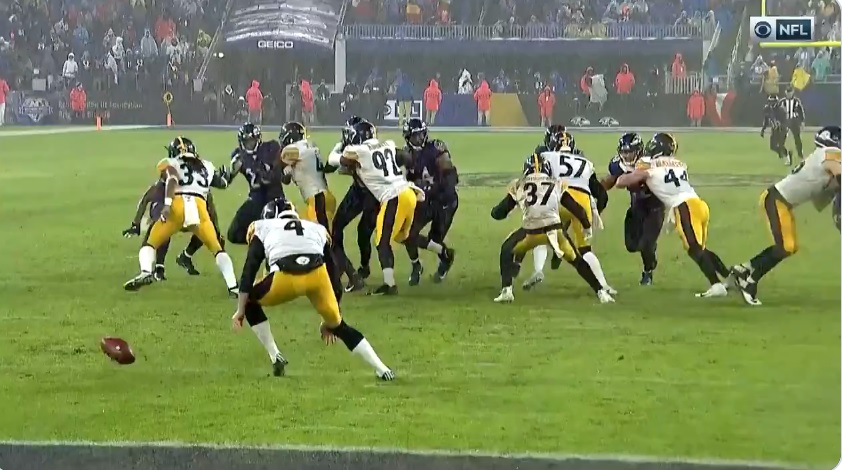 One team was playing for their slim playoff aspirations and the other was a team with majority of their starters resting. Still, it was hard to tell which team was which as the resting Baltimore Ravens defeated the Pittsburgh Steelers 28-10 to close the 2019 season.

The weather conditions were ugly but the Steelers’ performance was even uglier. Devlin Hodges was just 9/24 for 95 yards with no touchdowns or interceptions. The Steelers produced just 159 yards of offense and turned the ball over twice. There were also numerous drops and mental mistakes as it seems that the only aspect missing from this game was the Benny Hill theme music dubbed over the circus act that was the Steelers’ performance.

Though the Ravens were starting numerous backups, it did not seem that way as the Robert Griffin led offense ran right through the heart of the Steelers’ defense. By the end of the first quarter, the Ravens had just three pass attempts and 14 rushing attempts. Those 14 rushing attempts went for 89-yards with Gus Edwards accounting for majority of them. Behind Edwards, the Ravens were able to add two field goals and lead 6-0 at the end of the first quarter.

Of course, the weather was also the perfect running conditions for some Benny Snell football and the rookie running back’s tough, downhill running wore out the Ravens’ defense on the Steelers’ second drive. The Steelers drove 75-yards down the field to take a 7-6 lead and Snell was responsible for 40 of those yards, including the touchdown. The former Kentucky product would punch it in from the four-yard line to give the Steelers their first lead of the afternoon.

That lead would not last long as the Steelers began to crumble throughout the second quarter. It began with T.J. Watt being flagged with a roughing the passer penalty and continued with a 20-yard conversion from Griffin on 3rd and 12 before being finished with another Justin Tucker field goal.

With a chance to retake the lead going into the half, Hodges only dug the Steelers’ grave a few feet deeper. Deep in his own territory, the undrafted rookie quarterback was sacked and stripped with the Ravens recovering. Still it seemed that the Steelers’ defense would be able to hold the Ravens to just another field goal but the downpouring of mistakes was not yet complete.

A missed tackle opportunity by Mark Barron on third down gave the Ravens new life and another missed tackle by Terrell Edmunds gave them an eight-yard touchdown, courtesy of Justice Hill. The Ravens would head into halftime up 16-7.

Just as he has done all year, Watt provided a timely turnover right when the Steelers needed one. The Steelers’ pass rusher recorded his eighth forced fumble of the season by stripping Edwards with Joe Haden recovering. A few days after he was named Team MVP, Watt delivered an MVP-like performance, recording 0.5 sack and a forced fumble. His turnover would lead to a Chris Boswell field goal.

Despite the tiny spark provided by Watt, the Steelers’ defense continued to get run over by the Ravens’ running game and Tucker would chip in another field goal to make this a 19-10 game in the fourth quarter. The Ravens rushed for over 200 yards; a season high in rushing yardage allowed by the Steelers’ defense. Edwards led the way with 124 yards rushing while Griffin also contributed 40 yards on the ground.

The Ravens would score their final touchdown after punter Jordan Berry dropped the snap and fumbled upon being tackled. The fumble would be recovered by the Ravens’ in the end zone to give them a 26-10 lead. A safety on the ensuing drive would push that lead to 28-10 and drop the Steelers to 8-8.

With the Tennessee Titans defeating the Houston Texans, this result was essentially worthless but the Steelers faltered to the finish as they end the 2019 regular season with three straight losses. For the first time since 2012-2013, Mike Tomlin’s team will miss out on the post season in two consecutive years.