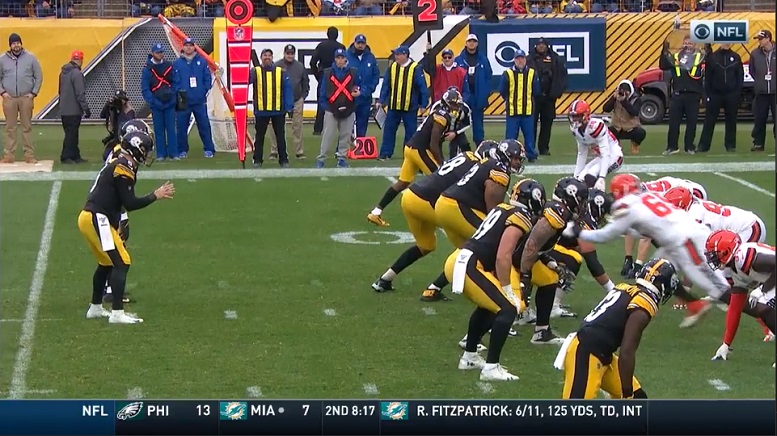 The Pittsburgh Steelers committed 10 total penalties in their Sunday home win against the Cleveland Browns and that’s the second consecutive game they’ve reached that number in that dubious statistic. If the 10 total penalties weren’t enough, eight of them were on the offense with six of them being false starts.

Four of those six false starts happened on second downs and three of the six penalties ultimately led to drives being killed. The Steelers offense only had nine meaningful possessions on Sunday so you can see how hurtful those false start penalties were.

For the season, the Steelers have registered 19 total false stat penalties and only four other teams have recorded more. It’s the team’s second-most kind of penalty behind offensive holding.

One of the six false starts charged to the Steelers on Sunday went to quarterback Devlin Hodges and the replay certainly shows that the referee botched that penalty. That charged false start on Hodges happened on 2nd and 7 from the Browns 19-yard-line and not surprisingly it led to the drive stalling and the Steelers needing to settle for a field goal with 3:00 left in the first half.

As fragile as the Steelers offense has been this season, pre-snap and unforced penalties such as false starts will likely be hard to overcome moving forward into the final quarter of the regular season. While head coach Mike Tomlin didn’t address the high amount of offensive penalties called on his team on Sunday during his post-game press conference, it will likely be a main talking point during team meetings this week.

One false start a game is somewhat understandable and maybe even two at the most. Six, however, is four or five too many and hopefully starting Sunday on the road against the Arizona Cardinals the Steelers offense won’t have to continue to overcome theses multiple pre-snap unforced errors.