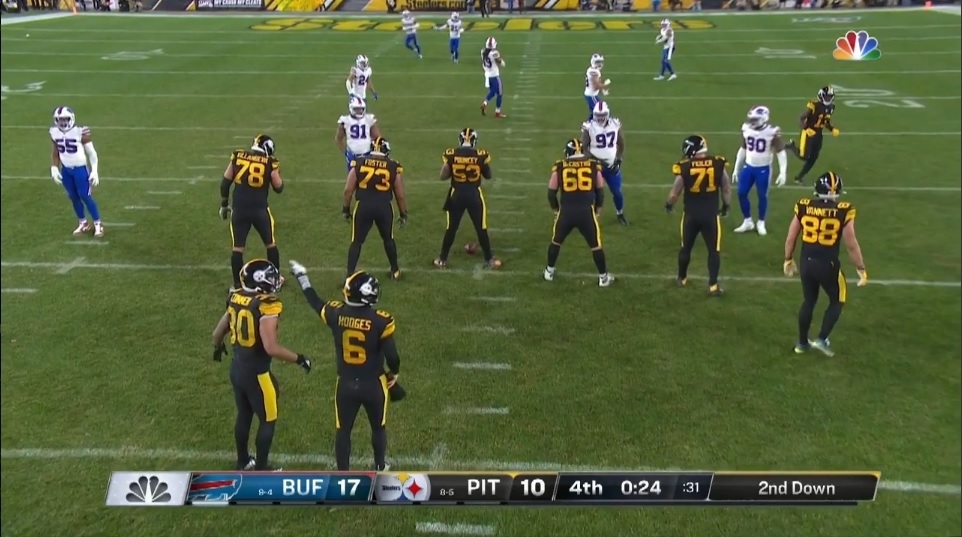 Discombobulation. It’s 16 letters long. Or exactly six more letters than the Pittsburgh Steelers had points tonight. The offense was a mess. That much is obvious even to the “fan” who watched this game because they liked how the Steelers’ jerseys looked.

Though there’s many examples of their failures in Sunday’s loss, none encapsulate those problems more than the final play of the game.

Let me set the scene in case you’ve been pounding back IC Lights since the clock hit 0:00. Devlin Hodges gets sacked on 1st and 10 on the Bills’ 34. They have no timeouts and there’s 34 seconds left on a running clock.

What’s the play here? Spike the ball. It’s the only option. Downs aren’t the issue. Spike it, set up for third down, giving you a pair of downs to work with. Time, though, is the real factor. Kill the clock, reset, call a good play, and see what happens.

Instead? Everyone runs back, gets lined up, Hodges tries to play traffic cop and get the play signaled, and they don’t snap it until there’s 15 seconds left. The play is haphazard, Hodges has to motion James Washington across and tell him where to go, and it ends in predictable disaster, throwing a hopeless prayer into the end zone to be picked by Levi Wallace.

It should’ve been spiked. You know it, I know it, and hey, Mike Tomlin wanted it. The NBC cameras caught him clearly saying “clock it” into his headset.

Mike Tomlin clearly saying "clock it" on final play of the game. Instead, Hodges tries to run a play, ends in an INT. Game over. #Steelers pic.twitter.com/Q8wJ6ILgKS

Why didn’t it get spiked? That’s a good question and one I haven’t heard asked. A clear communication breakdown between Tomlin, Hodges, and OC Randy Fichtner.

A teachable moment, Hodges hasn’t been in many situations like those this year, but one that comes with a costly price. The odds of Pittsburgh getting into the end zone even with about 15 seconds left aren’t great. The principle of the matter is still there. You have a much better chance to call an effective play with the time that isn’t shown in the clock. Getting a whistle, being able to huddle up, sub out personnel if need be, and be a bit more controlled with your rookie – who looked very much like one tonight – QB.

Bad end to a bad game.