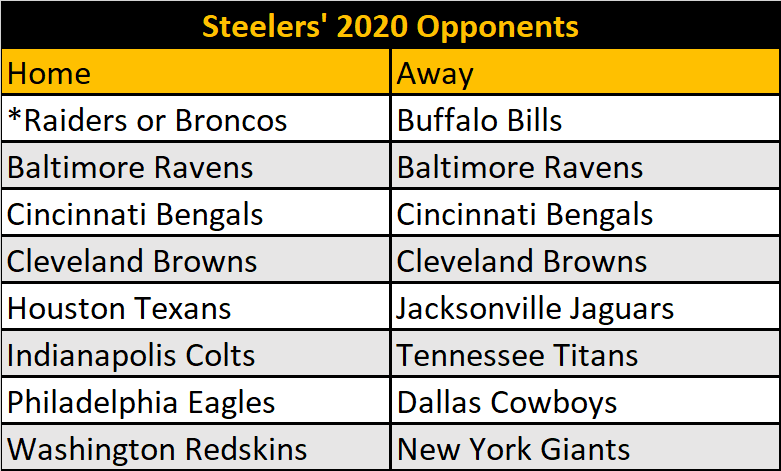 Thanks to the rotating schedule that the NFL has used for quite a while, we’ve already known 11 of the teams the Pittsburgh Steelers will play during the 2020 regular season for some time now. As of Sunday afternoon, we now know all but one of the Steelers 13 2020 opponents.

The rotating NFL schedule has the Steelers playing the AFC South and NFC East in 2020 in addition to their usual games against the teams in their own division, the AFC North. Thanks to the Steelers now being guaranteed to finish in second place in the AFC North this season, they’ll now play the second-place finishers in the AFC West and AFC East divisions.

With the Buffalo Bills now having clinched the second place spot in AFC East as of Sunday, you can add them to the list of teams the Steelers will play in 2020. That game, by the way, will take place in Buffalo.

Next weekend we will find out which AFC West team the Steelers will play on the road in 2020 and it will be either the Oakland Raiders or the Denver Broncos and those two teams play each other in Week 17. The raiders are currently one game ahead of the Broncos in the AFC West standings. The Steelers game next season against either the Raiders or the Broncos will be played in Pittsburgh.

The actual times and dates for the Steelers 2020 schedule won’t be released until April but below is a quick look at who they will play at home and on the road.