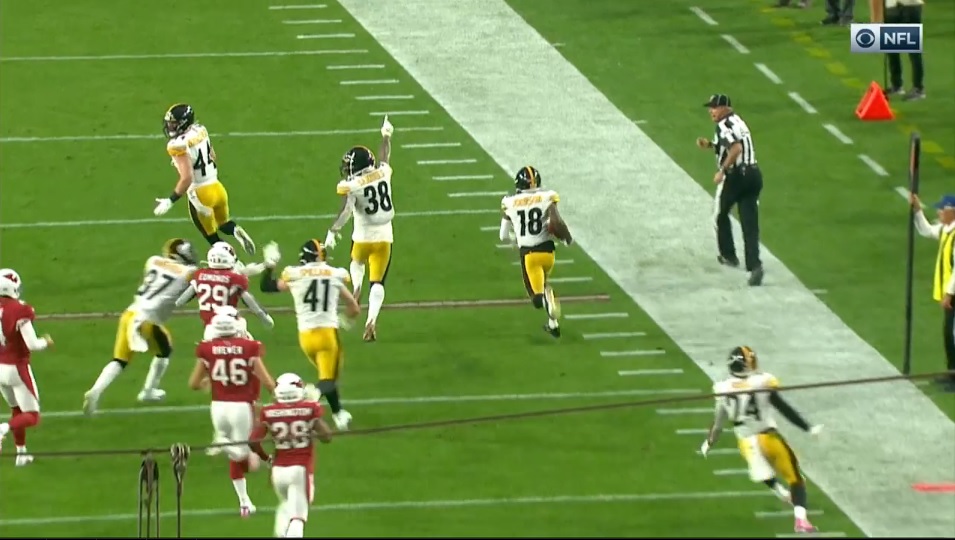 Time to get a little weird this Monday morning after the Pittsburgh Steelers 23-17 win over the Arizona Cardinals Sunday evening.

– Let’s start with the defense. Up to 48 sacks through 13 games this season. On pace for 59, just shy of that 60 threshold. Their 48 sacks now makes them #1 in the NFL, one ahead of the Carolina Panthers.

– TJ Watt and Bud Dupree become only the third pairing of Steelers to have 10+ sacks in the same season. Here’s the whole list.

Only little footnote here. As of this writing, the NFL isn’t giving Dupree his second sack in the fourth quarter. That should change, he clearly needs to be credited for it, but if he isn’t, that will take him back down to 9.5.

– Let’s flip back over to the offense. Diontae Johnson is the Steelers first rookie with a PR TD since Santonio Holmes in 2006. In the Colbert era, only Holmes, Johnson, and Hank Poteat in 2000 have done it as rooks.

Johnson and Louis Lipps in 1984 are the only rookies to have a receiving/punt return touchdown in the same game.

– Kerrith Whyte Jr. is averaging 6.7 yards per carry this season.

– Good things have happened this year when throwing Deon Cain the football. He’s been targeted five times this year. The results?

– Joe Haden recorded only his third multi-INT game of his career. Did it in 2016 and 2013. He is the first Steelers’ corner with an INT in consecutive games since Cortez Allen in September of 2014, more than five years ago.

– How about the last Steelers CB with three interceptions in two games like Haden’s done? Have to go all the way back to 2003 and Deshea Townsend. He did it in Week 16 and 17 that year.

– At the start of the year, we told you about the Steelers drought of not having any defender pick off 4+ passes since Troy Polamalu in 2010. That was the longest streak in NFL history. Minkah Fitzpatrick broke it earlier in the year and Haden joined him with his fourth pick of the season on Sunday. It marks the first time Pittsburgh’s had multiple defenders with 4+ picks since James Farrior, Polamalu, and Townsend in 2004.

– Over the last three weeks, opposing offenses are converting just 28.6% of their third downs. 10/35.