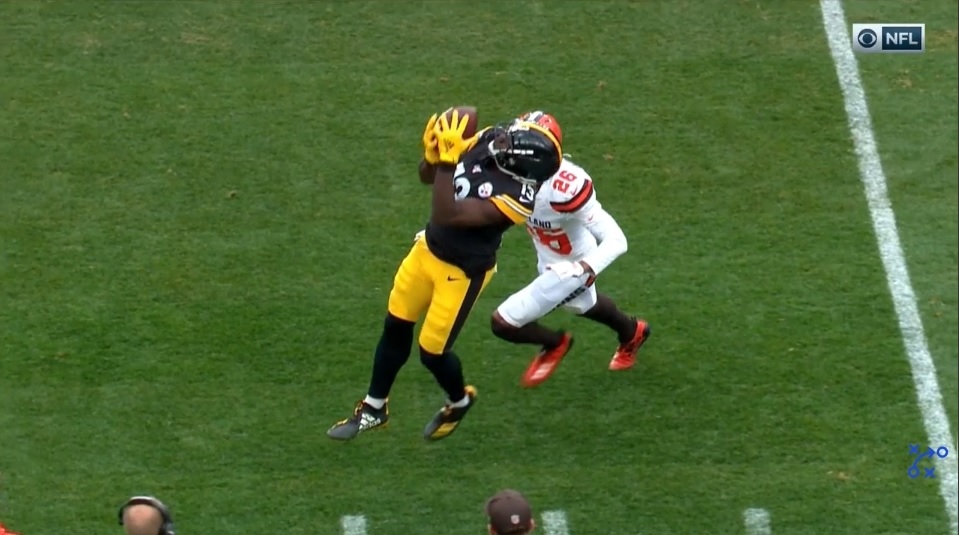 Let’s get weird after a great win.

– With the win, the Pittsburgh Steelers avoided getting swept by the Cleveland Browns in a regular season. The Browns haven’t swept a series since 1988. When the Steelers were still coached by Chuck Noll.

All AFC teams too. Even weirder. Steelers played two of them in the playoffs, beating Miami and losing to Denver (the infamous “Tebow” game).

– The Steelers’ defense made a huge adjustment in the second half. And the Browns were shut down. Here’s Cleveland’s offensive output in the 2nd half.

Doesn’t get better than that.

Watt is on pace to finish the year with 16.5 sacks. That would give him 36.5 in his career, tying Harrison’s three-year mark.

Today, sitting at 32.5 sacks, Watt is already tied for 11th in franchise history. He needs three more to crack the top ten.

– Cam Sutton recorded the first sack of his NFL career Sunday. It was his first since his freshman year at Tennessee, a November 9th loss to Auburn way back in 2013. And because you know we love this stuff, here’s a look at that one.

This game was also Josh Dobbs’ first home start for the Vols and two plays prior to this sack, Sutton tackled ex-Steeler Sammie Coates, who was a member of the Tigers.

– Speaking of sacks, the defense is on pace to finish with 57 of them. Since sacks became official in 1982, that would be a franchise record. The current high mark is 56, set in 2017.

– Off Joe Haden’s interception, the defense registered its 30th takeaway of the season. The first time they’ve done that since 2015 and only the third time under Tomlin. 2010 was the other.

Pittsburgh’s made the playoffs in years where they forced 30 turnovers five straight times. Let’s hope 2019 makes it six.

– One negative for the offense. Still only three points all season long for the Steelers on their opening drive. Opposing defenses actually have more points than Pittsburgh’s offense, 7-3, thanks to the Los Angeles Rams scoop and score a few weeks ago.

Only points from the offense stems from a field goal against the 49ers in Week 3, where San Fran turned the ball over and the offense went three and out, settling for three.

– Back to some positive offensive starts. James Washington is responsible for 52% of the Steelers’ pass yards the last two weeks. 209 of 402.