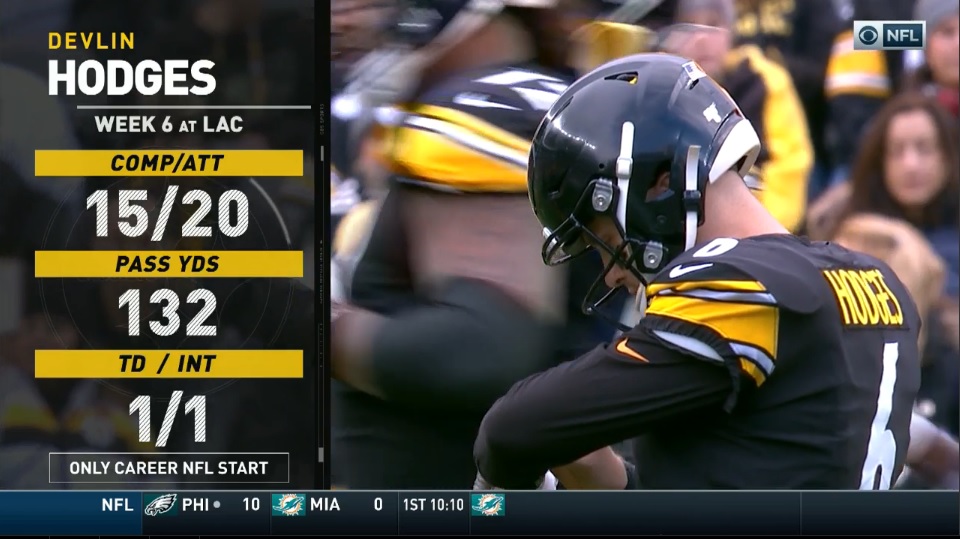 It’s far from an ideal spot but working with a 4th strong, UDFA quarterback is the spot the Pittsburgh Steelers are in. Of course, Devlin Hodges isn’t playing like a typical player sporting that resume. And it’s creating plenty of confidence in the young quarterback.

Mike Tomlin spoke to it after the team’s 20-13 win over the Cleveland Browns. He said he wanted to make a deliberate effort to show that confidence by having a “business as usual” mentality around Hodges during the week.

Though still highly inexperienced, Hodges previous impressive play has earned that confidence and trust in the coaching staff. Rallying the Steelers back to nearly beat the Ravens, losing after a JuJu Smith-Schuster fumble, doing enough to beat the Chargers, and providing a spark to comeback against the Bengals last week. Each time Hodges has stepped onto the field, good things have followed. Confidence that’s well-earned and deserved.

“I had more confidence in him today than I did against the Chargers because our relationship is born out of our shared experiences. We had the experience of what he did in the Chargers game in our back pocket. And that probably produced today. And that’s not only for him, but for anybody. You know, the more shared experiences you have with them, the more level of confidence in terms of what you can anticipate getting.”

It’s what gave them the confidence to make an obvious, though probably still uncomfortable, decision to bench Mason Rudolph, a man who they had a first round grade on, for Hodges, who the team didn’t even initially have on their 90 man roster in rookie minicamp.

So how did Tomlin sum up Hodges’ play today?

Today, Devlin Hodges, and the other men on the Steelers’ roster, ended it.

#LIVE: Coach Tomlin addresses the media following our win over the Browns.@budlight https://t.co/ApOIIfVFYn