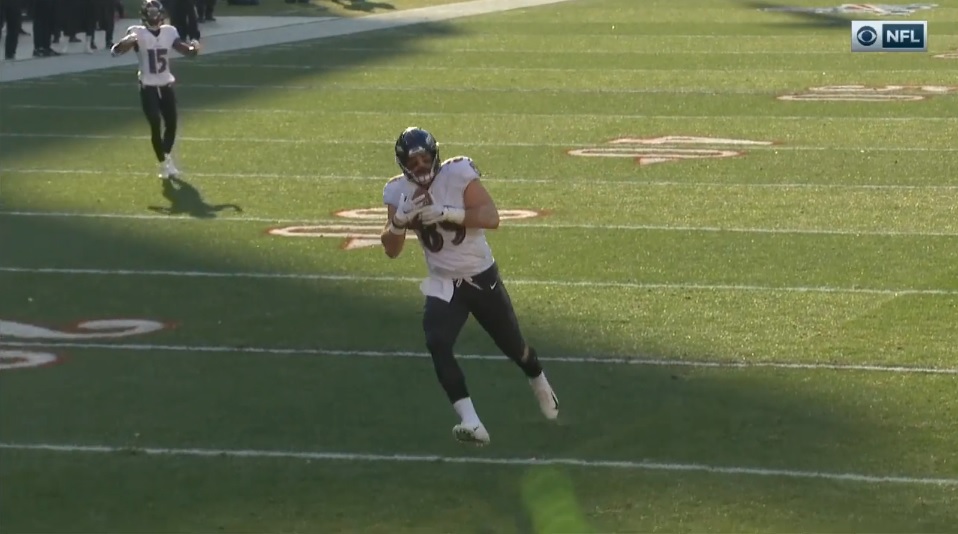 For the final time this regular season, our report on the Baltimore Ravens’ offense.

While the Ravens will be without their top QB (Lamar Jackson) and RB (Mark Ingram) this weekend, their run game will remain strong. It’s been the NFL’s best this season and it hasn’t been close. Jackson and Ingram have both eclipsed the 1000 yard mark, only the 7th 1000 yard duo in NFL history.

Their rushing attack is #1 in the following categories: attempts, yards, touchdown, yards per carry, 10+ yard gains, 20+ yard gains. Ya know, virtually every category that matters, they’re #1.

Of course, with Robert Griffin III starting, the structure of their offense will remain the same. A mobile QB who can run read option or QB power, both shown in the following GIF, and must be accounted for in the Steelers’ run fits.

Gus Edwards is averaging 5.2 yards per carry and 581 total yards on the ground. To put that in perspective, Edwards, a backup playing just 1/3 of the offense’s snaps this season, is more than 100 yards in front of the Steelers’ leading rusher (James Conner, 461). Rookie Justice Hill brings a mix of explosiveness to the backfield, as Josh mentions below.

In those option runs are “arc” blocks by the tight end. Often pulling from the backside, passing up the playside OLB (who is being read, not blocked) and working to the 2nd level to pick off a LB or DB coming downhill. Big reason why their run game has so many huge runs. Watch Mark Andrews, #89, here.

Some other offensive stats. They’re first in points per game, scoring at least 20 every single week, 28+ in nine games (the Steelers have yet to do it), and 40+ five times. They boast football’s best third down offense, converting 47.4% of the time, and are second best in the red zone at nearly 70%. Only the Tennessee Titans (73%) are better.

One other stat to blow your mind. Pittsburgh has 279 total points this year. From Week 9 to Week 16, Baltimore has 289 points. So the Ravens have ten more points over eight games than the Steelers have had all year.

RG3 will be the man under center this weekend. He’s thrown only 17 passes this season. His most attempts in a single game came to six which happened all the way back in the Week 1 blowout over Miami. So his experience (73 snaps in 2019) is limited.

Mark Andrews isn’t one of the key players sitting out which is unfortunate because he’s their top weapon. Ravens’ leader in receptions (64), yards (852), and touchdowns (10). Though I suspect his playing time will be awfully limited, especially given the strength of the position with Nick Boyle and Hayden Hurst as more than capable backups who see plenty of playing time even under normal circumstances.

They have a couple of dynamic rookies in Hollywood Brown and Miles Boykin. Brown has the majority of the numbers but combined, they’ve racked up 57 receptions, 767 yards, and ten scores. Boykin has found the end zone three times on only a handful of catches. They have nine different players with at least one TD. Pittsburgh has just six.

The pass game isn’t quite as explosive as you might expect for the NFL’s best offense in 2019. Tied for 24th in pass plays of 20+ yards but that just proves how run-centric they’ve been. Plus, with so many blowout wins, there wasn’t reason to throw the ball. No team has thrown the ball less than the Ravens. 419 attempts.

They also use it to leverage their running backs. Works as a pick play so the LB gets caught in the trash, and the RB is free in the flat for a long catch and run.

Nice job by OC Greg Roman in creating 3×1 looks too. Motions Andrews from 2×2 to 3×1 on the snap, making it harder for the defense to match, and they run a half-field “spot” concept, a three level route consisting of a corner, curl (the “spot” route) and flat.

I hope everyone had a very Merry Christmas. Now we hope the Steelers give us one more thing to cheer about this season.

Head Coach John Harbaugh announced early in the week that the Ravens will sit a number of starters on offense, including likely-MVP Lamar Jackson, running back Mark Ingram, and right guard Marshal Yanda.

That means veteran backup Robert Griffin III will start at quarterback for the first time in more than four years. Griffin has gotten some time this year in Ravens blowouts, but it’s simply not enough to know what, exactly, the Ravens will offer with RG3 on Sunday.

RG3 has seen action in six games this year but has attempted just 17 passes and carried the ball 12 times. Six of RG3’s 17 attempts came in a Week 1 49-point win on the road over the Miami Dolphins, a game in which he played most of the fourth quarter.

In that game, RG3 did show some flashes of his former Rookie of the Year self.

When RG3 is on time, he’s accurate with the football and has a strong whip-like arm. This out route to tight end Hayden Hurst on the far hash really brought up flashes of his 2012 form for me.

Then, in Week 12 on the road against the Rams, he showed off his arm strength and touch in a 45-6 win over the Los Angeles Rams on the road.

That’s a really good throw down the field from a backup quarterback coming off the bench cold on the road. He puts this where rookie wide receiver Miles Boykin is the only one to really have a shot at making this catch.

What I expect the Ravens to do with RG3 on Sunday is still run RPOs and read-options in the backfield, making for easy, quick throws and decisions, keeping the Ravens’ offense in sync with what they’ve run all season.

Expect to see short, quick throws like this, especially to the tight ends.

Mark Andrews is the go-to tight end in this offense, considering he’s their leading receiver overall. However, RG3 has shown some rapport with Nick Boyle on the year, getting the blocking tight end involved as a receiver.

Don’t expect the Ravens to open the playbook with RG3 – or even Trace McSorley – running the show. They’ll still do everything like they would with Jackson calling the shots…it just won’t be as explosive.

In the backfield, with Ingram sitting, the onus falls on Gus Edwards and rookie Justice Hill to carry the load against the Steelers.

Edwards has a ton of experience with the Ravens, considering he was the bellcow back down the stretch last season. Edwards is a bruiser with real home run speed. I just hate his nickname.

Get Edwards rolling downhill like this and look out. He’s built like a power back, but he has some serious juice in those legs.

With Hill, readers should already know at this point that he’s a homerun threat any time he touches the football. I was clamoring for the Steelers to grab him in the draft, but of course he fell to the Ravens.

He hasn’t gotten a ton of work this year, but when he has he’s really flashed, especially last week in Cleveland.

This is one cut and some incredible burst by Hill, getting upfield for the 18-yard touchdown. He’s going to get quite a bit of work on Sunday, so the Steelers have to make sure he’s bottled up sideline to sideline.

Tackles Ronnie Stanley and Orlando Brown Jr. will still hold down the edges for the Ravens. That’s arguably the best tackle tandem in football. The Steelers won’t get a reprieve there.

Here’s how I expect the Ravens to line up on Sunday left to right:

Mekari took over for Matt Skura, who went down with an injury in the win over the Rams in Week 12.

This is still a terrific offensive line that excels at what the Ravens want to do offensively.

Wideouts Boykin, Marquise Brown, Seth Roberts, and Willie Snead IV work well together. Brown and Boykin are the deep threats in this offense, while Roberts and Snead IV are the possession guys.

Make no mistake though: this passing game runs through the tight ends.

On special teams, Justin Tucker and Sam Koch continue to be arguably the best specialists tandem in football. There’s not much more to say there.

Returner De’Anthony Thomas was claimed off waivers from the Chiefs, but he hasn’t had much impact. He’s averaging just 6.1 yards per punt return and 18.9 yards per kick return. He’ll split kick return duties with Hill.