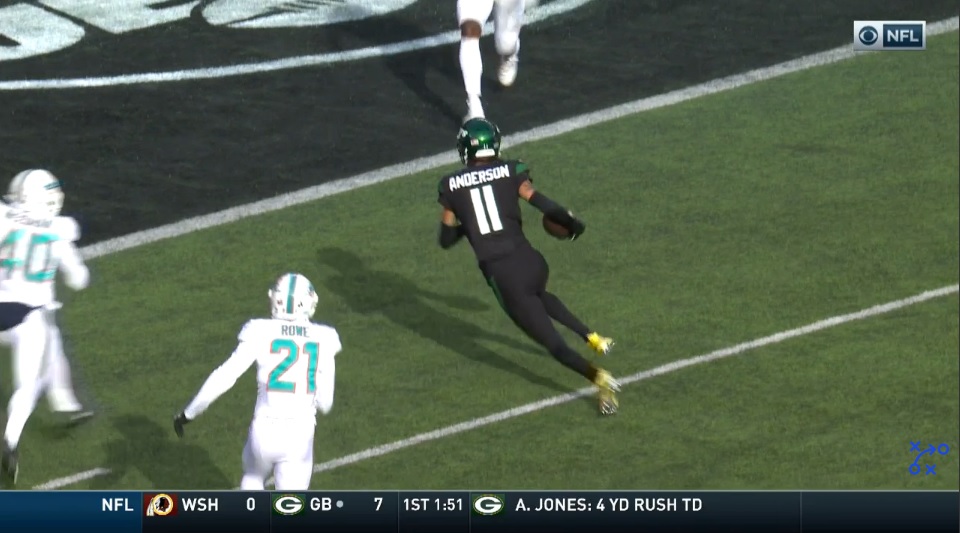 Our report on the New York Jets’ offense.

Led by you-know-who, Le’Veon Bell. A man finding out the grass isn’t greener on the other side, even if his jersey is. Bell is averaging just 3.3 yards per carry in 2019. Not only is that a career worst, it’s tied for the 43rd lowest YPC of all qualified running backs this year, tied with Kerryon Johnson and only ahead of Peyton Barber’s 3.1 mark. Bell’s only gone over 70+ yards rushing twice this season and has found the end zone a measly three times.

About the only thing that remains the same is his usage. Despite missing one game with an illness, Bell is still playing 76% of the Jets’ offensive snaps this season, fourth most at his position in the league. The backs behind him, Ty Montgomery and Bilal Powell, barely see the field when Bell’s active. Remove Powell’s stats from the game Bell missed and has just 32 carries on the season. Montgomery? Only 21.

Their run game has lacked only semblance of explosiveness. Bell’s longest carry is just 19 yards and as a team, they have just 21 runs of 10+ yards. That’s 31st in the NFL. On top of that, they’ve recorded only one carry of 20+ yards, dead last in football. Every other team has at least three.

Schematically, there are plenty of inside zone/split zone, which is very much in Bell’s wheelhouse. Read the flow, hit the hole.

Use a TE as a fullback for some counter OF plays as well.

Some other offensive stats. They’re terrible on third down, 31st in the league at 30.6%, while hovering around average in the red zone at 58.6%.

Key stat is though for the year, they rank 28th in points per game, they’ve recorded 20+ in five of six games. Had 30+ points in three of those.

One that’s much improved over the last two months. Sam Darnold under center after missing weeks with mono, which made the Jets’ offense look much worse than it was. For the year, he’s completing just under 62% of his passes with 17 TDs and 12 INTs. While his completion percentage has remained about the same, since Week 9, he’s thrown 12 touchdowns, just four picks, and sports a 4-3 record. So tale of two seasons for Darnold and this team.

His top two weapons are Jamison Crowder, a slot, underneath threat, and Robby Anderson, their outside vertical weapon. Reflecting on last week, think of Crowder as the Bills’ Cole Beasley and Anderson as John Brown. Statistically, Crowder has a team high 66 receptions at 10.7 per catch while Anderson has 47 grabs and 15.5 yards per grab.

TEs involved a little more this year than year’s past. Ryan Griffin leading the charge there with 34 of them. And Bell, of course, is involved as a receiver with 57 receptions though his YPR is a career-low 7.1. He averaged 8.5 yards per catch as a Steeler.

As a team, they rank 25th in completions of 20+ yards. But Anderson is a legitimate downfield threat and must be accounted for. If Pittsburgh plays single high, Darnold won’t be afraid to chuck it deep.

Conceptually, there’s a lot to defend. Especially playing at home, expect them to go empty set and spread the field horizontally. Steelers have been better lately defending it than the start of the year but it’s still difficult for any defense to handle.

The Jets’ offense likes making easy triangle reads for Darnold. Some Hank/spacing concepts or this triangle read here. Out of 2×2 initially but #1 on a drive route makes it a three man combination to the right side. If you play soft zone coverage, you’re going to be flooded and exploited. Darnold isn’t a major running threat so man up and force tough throws.

In the first clip, they’re running a sail (flat/corner/vertical) concept with #1 on a drive route across and on the second, you get a hank/spacing look with a half-field read for Darnold. Very easy for him to go through his reads.

They also love divide routes like this post/wheel. Alert for it on 1st/2nd and 10 between the 40s.

One other thing to note. Have shown a couple trick play attempts. Bilal Powell attempted a HB pass against Washington in Week 11. It fell incomplete, dropped by Braxton Berrios. Three weeks later, Anderson wanted to throw the ball on a WR pass but it was well defended and he tucked the ball for a four yard gain.

Common thread here? Two things. Coming after a big play. Powell’s was two plays after Washington turned it over on downs and one play after the Jets notched a 26 yard gain. Anderson’s attempt came on the first play off a Dolphins’ turnover.

Line of scrimmage has a theme too. Powell’s came on Washington’s 43, Anderson’s at Miami’s 44. So once they cross midfield, get ready.

Coming off of a tough test last week in primetime at home against the Buffalo Bills, the Pittsburgh Steelers make the trip northeast to take on another New York team in the Jets at MetLife Stadium in hopes of keeping their playoff hopes alive.

The Jets have quite the up and down year. Second-year quarterback Sam Darnold battled through mononucleosis, missing a handful of games, which essentially torpedoed the Jets’ season.

Since his return though, the Jets have shown some flashes, especially on offense.

Darnold, part of the 2018 QB draft class, has shown signs of being a good franchise quarterback. Aside from his “seeing ghosts” debacle against the New England Patriots, Darnold has played some good football for the Jets.

He’s a mobile quarterback with a big arm, and has really seemed to develop a great rapport with Robbie Anderson, giving the Jets a really good 1-2 punch in New York.

Along with Anderson, Darnold has leaned heavily on Jamison Crowder out of the slot. When the Jets are rolling, they’re taking deep shots and deep crossers to Anderson, and working Crowder in space out of the slot.

This play in Week 15 against the Ravens showed me quite a bit with Darnold. He has the mobility to extend plays with his legs, working outside of the pocket against the Ravens. Then, he fires an absolute BB to Crowder on the run – across his body – with tremendous accuracy.

Crowder does all the work after that, racking up a ton of yards after the catch to move the chains for the Jets.

When targeting Anderson, Darnold’s touch and accuracy is above average.

Against the Cincinnati Bengals in Week 13, Darnold showed off arm strength, touch and accuracy to fire a dart to Anderson on a deep crossing route. The touch and arm strength is impressive here because he has to not only get it over the linebacker, but have the ball arrive to Anderson on time before contact.

The accuracy is really impressive too because it hits Anderson right between the numbers.

Then, in Week 14, Darnold drops a dime to Anderson on the go route.

Watch Anderson’s release here. It’ s as clean as it gets against tight, press coverage. Darnold’s touch on this deep ball was what I really liked about him coming out of USC.

The Jets’ offense really revolves around Darnold, Anderson and Crowder. That’s about it.

Bell still has all the talent in the world, but the offensive line in front of him is a disaster, and the scheme doesn’t help him one bit. It also doesn’t help when the head coach of the team says he didn’t want you on the team in the first place.

Bell flashed a bit against the Ravens, ripping off a nice run off left tackle, where he showed his vision and power.

This honestly might be one of Bell’s best runs of the season. He has shown his patience and power throughout the year, but like I said earlier, the offensive line is a mess.

However, I thought Bilal Powell – a guy I’ve liked quite a bit over the years – ran the football really well against the Dolphins.

I’d like to see the Jets utilize Powell a bit more, because he’s a great compliment to Bell, whereas Ty Montgomery simply isn’t.

Powell has the speed, the vision, patience, and power, which we all saw on this run.

Compton might not play on Sunday due to injury, which would thrust Brent Qvale into the lineup at right guard.

Beachum and Lewis are average linemen who can fill holes, but at this point in their careers it’s tough to count on them as starters. Beachum has struggled with penalties this year.

Harrison has gotten better and better each week at center and has a good rapport with Darnold, but he tends to get called for an untimely penalty or two a game, wiping out big plays.

Shell is simply too big and too slow at tackle. If he played in a different era he’s be much more highly regarded.

At tight end, the Jets simply don’t have much of anything to work at.

Daniel Brown and Trevon Wesco are solid blockers under Gase, but they just aren’t receiving threats.

Out wide, Vyncint Smith is really starting to grow on me. He’s good after the catch and has a ton of speed. He’s come up with some key catches this year. Demaryius Thomas is also on the roster, but he’s a shell of himself.

On special teams, Sam Ficken has kicked the ball well this year and even hit the game-winning kick two weeks ago for the Jets. He just doesn’t have a strong leg though and won’t be much of a factor 45+ yards out.

Punter Lachlan Edwards has a big leg and has good touch to his punts, averaging 46.1 yards per punt with 24 of his 76 punts downed inside the 20-yard line.

Smith is the kick returner and has some serious speed to burn, while Braxton Berrios is the punt returner. Think Ryan Switzer when you see Berrios on Sunday. He’s just not a threat on punt returns.