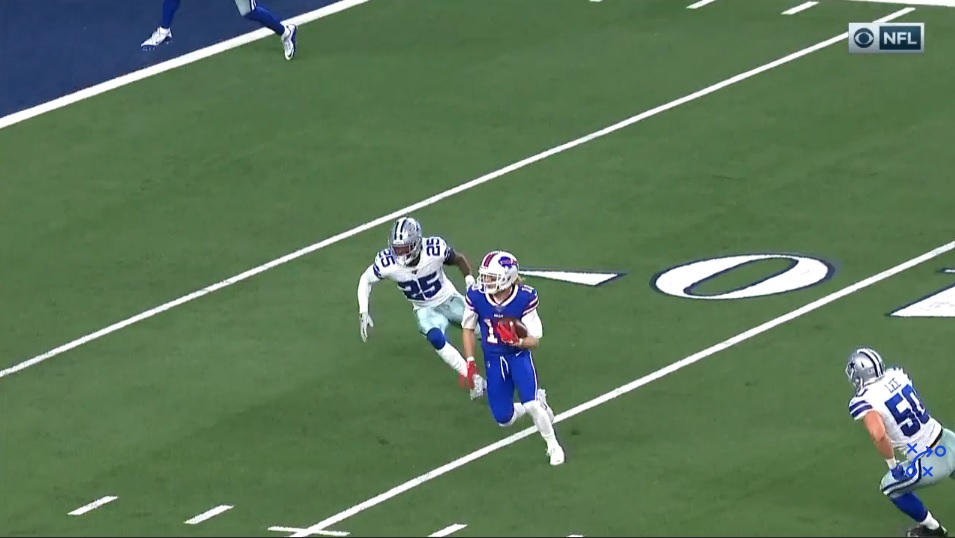 Our report on the Buffalo Bills’ offense.

A strong run game. Tied for 6th in the NFL averaging 4.6 yards per carry and fifth in yards per game at just over 135. And there’s multiple sources providing that production. Old man Frank Gore is still in the league, averaging just 3.7 yards per carry but his ever-dependable self. Devin Singletary is providing the big spark, a shifty, hard-to-bring-down back, at 5.6 yards per carry. Third stringer TJ Yeldon has 10 carries, which equals his number of receptions, which shows he’s a third-down type player.

Josh Allen, a threat to run, has 439 yards, trailing only Lamar Jackson and just barely behind Kyler Murray. He’s a Roethlisberger-type body, those were often the comparisons coming out of Wyoming, and he’s just hard to bring down.

As an offense, they have 48 runs of 10+ yards, which ties them for fourth most in the NFL.

Conceptually, they have to run more pin and pull schemes than any other team in the league. Backside pullers with a frontside down block. Couple examples to show you what I mean.

They’ll run read option too just as the Cardinals did last week. So some similar schemes Pittsburgh will need to defend.

Much to the chagrin on Steelers’ fans, Buffalo’s not afraid to run QB sneaks in short yardage situations. Allen does a great job of finding the “bubble,” the gap along the front and using his giant frame to churn out a yard or two. But he also has the ability to check out on the fly too. Here, after seeing Allen run several sneaks against Dallas the week prior, Baltimore tries to clog up every A and B gap, a natural and smart reaction to discourage the sneak. Eliminate all the bubbles.

So what does Allen do? Quick check to a stretch play and they convert that way.

Their interior line isn’t great and vulnerable to run blitzes and losing the point of attack. So attack them up the middle. Think the Steelers will be aggressive and have a similar gameplan as they did against the Cleveland Browns two weeks ago.

Some other offensive starts. They’re below average on 3rd down, converting 37% of the time (18th in the NFL), but one of the league’s better red zone teams, finding the end zone 61% of their chances. That’s top ten in football. They rank just 20th in points per game.

Josh Allen is the man under center. Completion percentage is still unusually low for QB play today, under 60%, but he’s doing a great job taking care of the football. The whole offense is, really, increasing the similarities to the Cardinals’ group. Allen has thrown just one interception his last eight games and the Bills’ have turned it over just three times total, including that pick, over that span.

The downside? Lot of sacks, again, just like Murray. He’s been taken down 33 times this season, ten the last two weeks, and the Ravens beat him up pretty good with blitz after blitz last week.

The difference between the Bills and Cardinals is the speed at WR. Chiefly, around John Brown. He’s averaging 14.2 yards per reception and 14 of his receptions have gone for 20+ yards. Vertical threat and they’re not afraid to throw it deep when they get single high looks.

Brown, by the way, threw a 28 yard TD to RB Devin Singletary this year against the Cowboys, a reverse that hit Singletary on a wheel, so watch out for some primetime trickery.

Elsewhere, Cole Beasley is Allen’s second-favorite target and underneath threat, averaging 11.3 yards per grab. Despite only a relatively low 59 receptions on the year, which puts him in 32nd place, he’s 10th in third down receptions with 21. So watch out for him in those “gotta have it” moments. He always seems to be the receiver who breaks open on scramble drills when Allen extends plays outside the pockets.

In general, they like to use crossing and over routes to flood zone coverage and leverage man-to-man.

Here’s their “dagger” concept which is a seam/dig concept to put the safety in conflict.

Pittsburgh faces off against a tough offense Sunday night in primetime as Josh Allen and the Buffalo Bills ride into town to try and circle the wagons on the road.

Offensive coordinator Brian Daboll has done a great job with Allen and the Bills in his two years on the job, turning them into a tough offense to scheme for due to the playmaking at receiver, and the dynamic talent in the backfield.

Allen was arguably the most maligned quarterback in the 2018 NFL Draft, but he’s developed really nicely for Buffalo, turning into a good dual-threat behind center for the Bills.

Everyone knows he has the big arm and the legs to make plays, but what he’s done this year is develop touch and accuracy in the intermediate area, allowing him to open things up, taking defenders out of the box to help the run game.

A lot of that has to do with the addition of slot receiver Cole Beasley, who is on pace for roughly 75 catches, 850 yards and 7 touchdowns. That’s pretty darn good for a slot receiver in a run-heavy offense.

Beasley’s success has a lot to do with his route running and his ability to separate.

Buffalo loves to get Beasley in tight in the slot, lining up just off the end of the offensive line, forcing the defense to send a defender in tight and work in that muck in the box.

This hesitation by Beasley early in the route rocks the Ravens’ defender to sleep just slightly, allowing Beasley to burst out of the hesitation on the crossing route, allowing him to get wide open for a 14-yard gain, setting up a field goal.

Earlier in the year against the Denver Broncos, Daboll did a great job scheming up a route combination against the Broncos’ defense to get Beasley one-on-one in coverage with a linebacker. That’s an easy win for Beasley.

This one comes off of play-action, a play in which Beasley releases slowly off the line, working his way across the Denver front. The run fake by the Bills causing Denver’s linebackers to come downhill just slightly, which is all Beasley needs to win.

Neither of those throws by Allen was difficult, but he definitely has the arm talent to make all the throws. Touch and accuracy on deep shots are still a major problem, but the combination of a howitzer of an arm and the ability to scramble for yards makes him a dangerous threat.

This pocket presence and ability to navigate against pressure like this is absurd.

Now, Allen probably could have thrown this ball to Devin Singletary after escaping all that pressure, but I understand him just tucking and running after making all those defenders miss in the pocket like he did.

It will be a tough day corralling Allen and his legs on Sunday for the Steelers.

Along with Allen in the backfield, Singletary has really emerged in recent weeks, giving Buffalo an emerging presence at running back.

Coming into the NFL, I was super high on Singletary. So far, he’s lived up to what I was expecting from the Florida Atlantic product.

He has incredible contact balance, above-average vision and is a fast-twitch back in space.

This run against the Broncos summarizes a lot of what I just said above about Singletary.

Broncos safety Kareem Jackson is one of the hardest hitting defensive backs in football, and a sound tackler. Singletary bounces right off of this hit, allowing him to continue to pick up yards along the left sideline for the Bills.

He’s so difficult to get on the ground.

Frank Gore backs up Singletary and provides the thunder to Singletary’s lightning. Gore is a sure bet for the Hall of Fame, and still is getting it done this late in his career in the league.

Tight ends Tyler Kroft and Dawson Knox balance each other for the Bills. Kroft is more blocker than receiver, while Knox’s biggest impact has been as a receiver, giving the Bills an option to stretch the field vertically over the middle.

One guy the Bills really like to get the football to in space is wide receiver Isaiah McKenzie. McKenzie is certainly a gadget guy, but he makes plays when the football is in his hands.

A tunnel screen to the boundary for McKenzie helps the Bills rip up the Ravens’ defense for 24 yard and a key first down.

Up front, the Bills have a super-underrated offensive line. I really, really like this group up front. Here’s how I expect them to line up left to right on Sunday night:

I loved Cody Ford coming out of Oklahoma last year. He’s a dancing bear as a pass protector and a mauler in the run game. Same for Dion Dawkins, who is quietly a high-level left tackle in football.

The interior of the line is grossly underrated. Mitch Morse is a Pro Bowl caliber center, while Jon Feliciano has been quietly a good guard for much of his career. Quinton Spain was a bust in Tennessee, but since moving north to Buffalo he’s resurrected his career.

Watch this group on Sunday and let me know what you think. I really like the group.

On special teams, Steven Haushka is an up-and-down kicker. He’s missed 7 field goal attempts on the year, and 2 extra points. Four of his 7 field goal misses have come from 50+ yards. He simply doesn’t have the leg strength at this point in his career.

Punter Corey Bojorquez has a huge leg, but he’s so inconsistent it’s not even funny. Last week, Bojorquez boomed a 67-yard punt, and then proceeded to shank a pair of punts later in the game. That’s been the case with him all season. He’ll rip off monster punts, and then shank one in the worst of spots.

Return man Andre Roberts is one of the better ones in the game. He’s a perennial Pro Bowler as a returner, but hasn’t really ripped off the explosive returns the Bills were expecting this season. He does have a 66-yard kick return this year though. He’s dangerous, so the Steelers’ coverage units will need to be on top of things Sunday night.