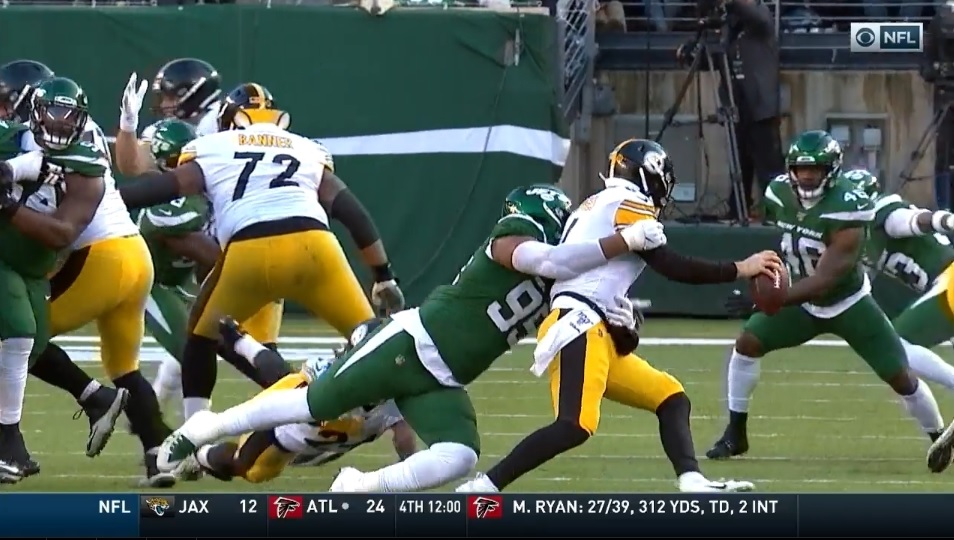 Looking at the four sacks the Pittsburgh Steelers allowed in last Sunday’s loss to the New York Jets.

Steelers keeping things in tight with only two receivers initially going out on a route. Nothing immediately open as Devlin Hodges hits the top of his drop though James Washington ends up running a nice 15 yard dig route and creates a lot of space in the middle of the field. 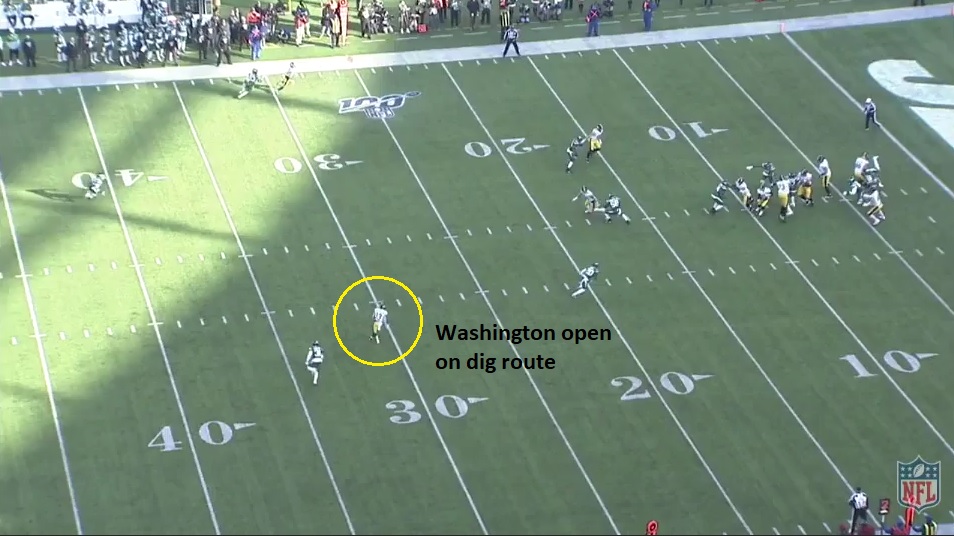 David DeCastro does get walked back a bit on a bull rush and Hodges has to climb up into the pocket. Washington ends up getting open with a clean lane but Hodges loses his base, drops his eyes, and though he did well to initially hitch up, looks to roll out of the pocket again. 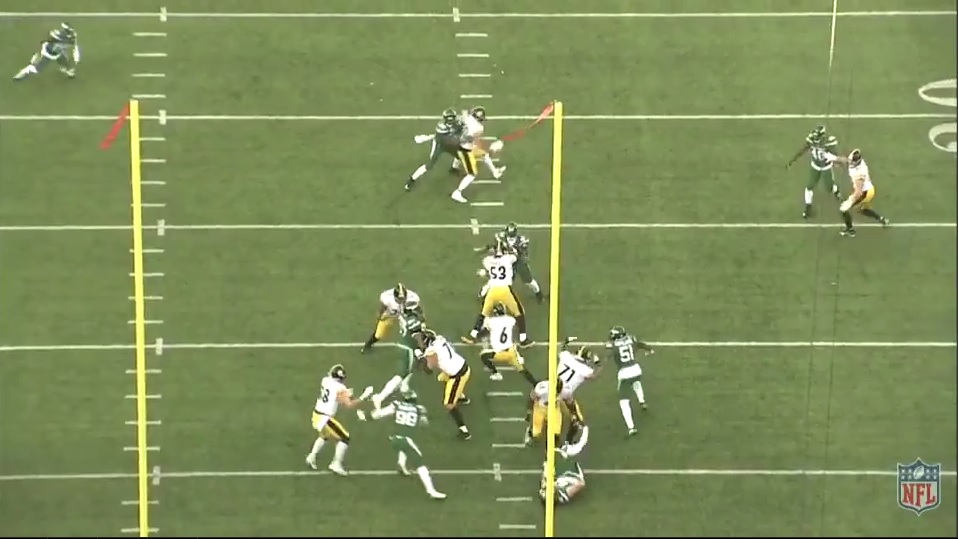 Ultimately gets taken down in space for a five yard loss. Not my favorite playcall on 2nd and 9 but definitely some personnel issues here. DeCastro may allow a hint of pressure here but he seals his man upfield and keeps the pocket clean for Hodges, which is all you can ask for. Hodges just needs to stay composed and keep his eyes downfield. He would’ve found Washington open for a first down. And then some.

This is the play we highlighted the day after the game, showing the lack of adjustment and inability to learn from past mistakes. Matt Feiler making the same unforced errors he made versus Buffalo. Overload, ILB/DB blitz. Matt Feiler is feeling for the looper as the LDE crashes but also has eyes on the ILB, #46, rushing in. 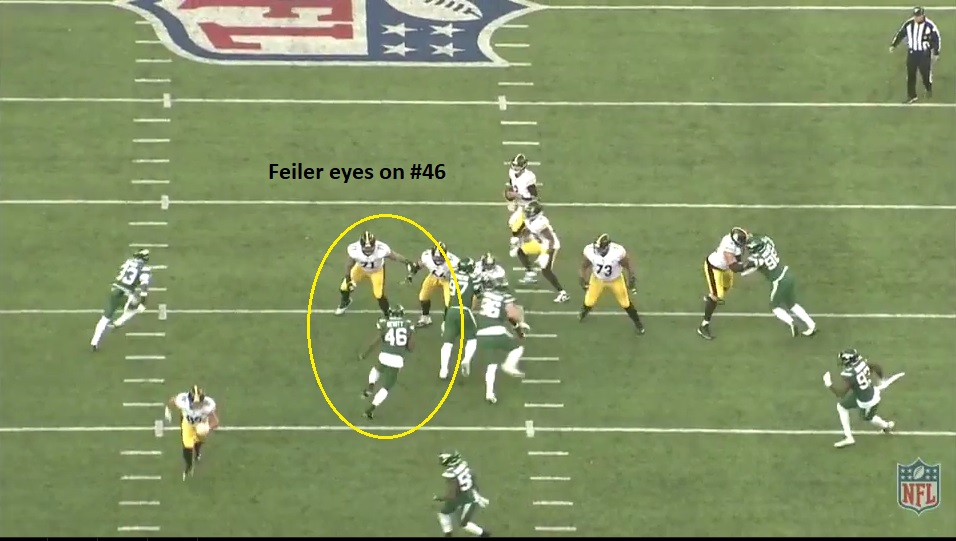 For some reason, at the last second, he comes off that, and works towards the blitzing DB. That’s Jaylen Samuels’ assignment and it leaves #46 unblocked, Samuels and Feiler now blocking the same guy, and it results in a sack. 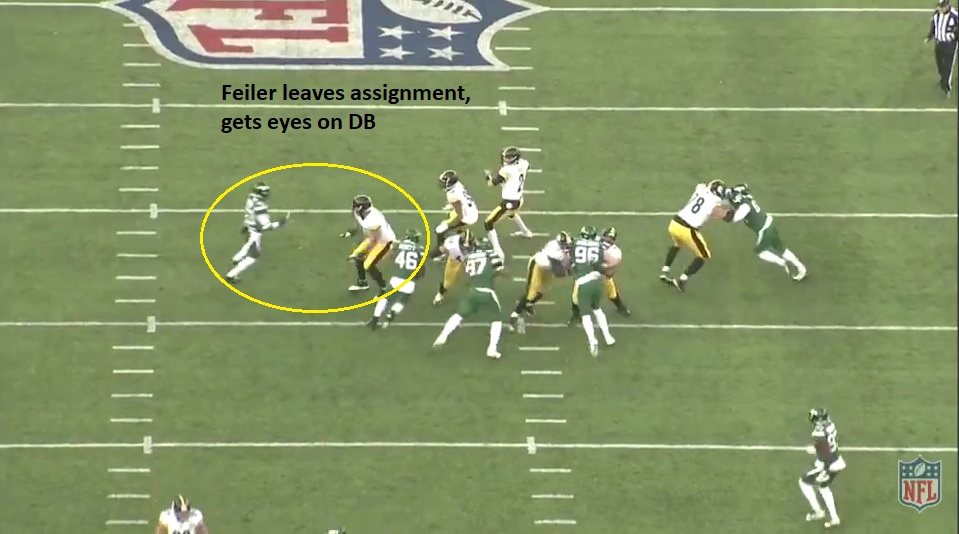 Super frustrating play and one I put on Feiler for another mental error. Turned it into a 3rd and 19 and forced the Steelers to settle for a field goal.

Really would love to know what’s going on here. #95 Quinnen Williams, the #3 overall pick in this draft, is left totally unblocked. Steelers trying a rollout/throwback play, think the Xavier Grimble fumble last year, the failed 4th down attempt in the first Browns’ matchup earlier this year, and Hodges is a sitting duck.

Assume the issue is #58 on this run blitz and Ramon Foster working inside out to take him. But there’s no one left for #95. Product of the Steelers not really having a response to this look and counter by the defense. Normally, that LB isn’t that aggressive in the A gap, letting the guard pick up the DT.

Hard one to pin the blame here. I’m just putting this on a bad playcall, a rollout on 2nd and 7 for a fruitless throwback, that wasn’t flexible enough to handle a blitz. Know many will put this on Foster but this is truly a tough spot for a last-second blitz look.

Late in the game, Steelers gotta throw, and the Jets know it. Line does a nice job picking up this blitz but there isn’t a whole lot downfield for Hodges to look for. However, against Cover 2, James Washington finds grass and settles into a window. Is it a tighter throw? Yes. But Hodges is looking at it, sees the CB in the flat getting width, and he’s gotta pull the trigger here. Gotta make a play late in the game.

Or at least hit the flat, get a couple yards, and put yourselves in 3rd and relatively manageable. 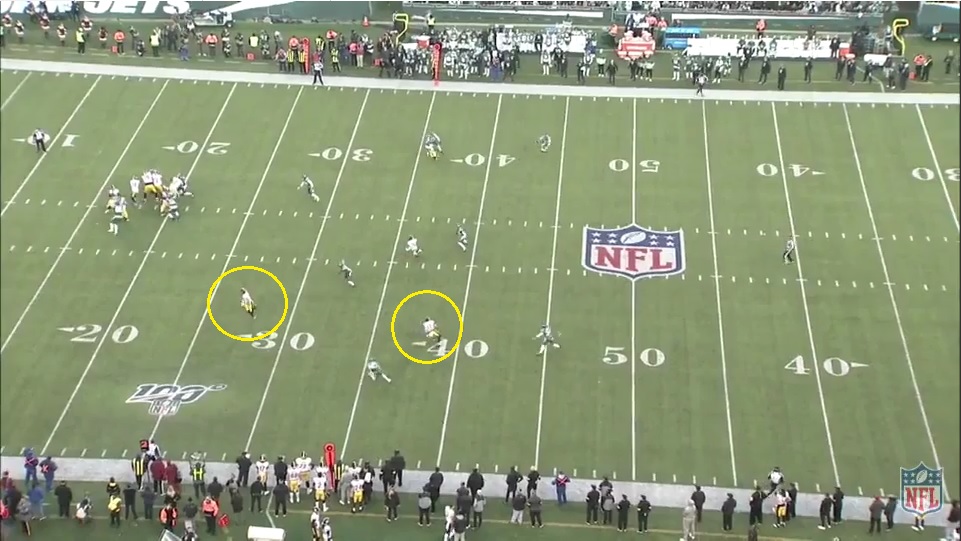 Instead, he again steps up in the pocket, which is improvement in his game, but the downside is you have less time to make a decision and can’t throw the football away because you’re still in the tackle box. So a higher risk for sack as opposed to the past, when he would bail and chuck the ball to the sideline.

Time runs out, LB runs in, and drops Hodges. Putting this on Hodges for looking a little paralyzed by what decision he should make and ultimately not pulling the trigger on anything.