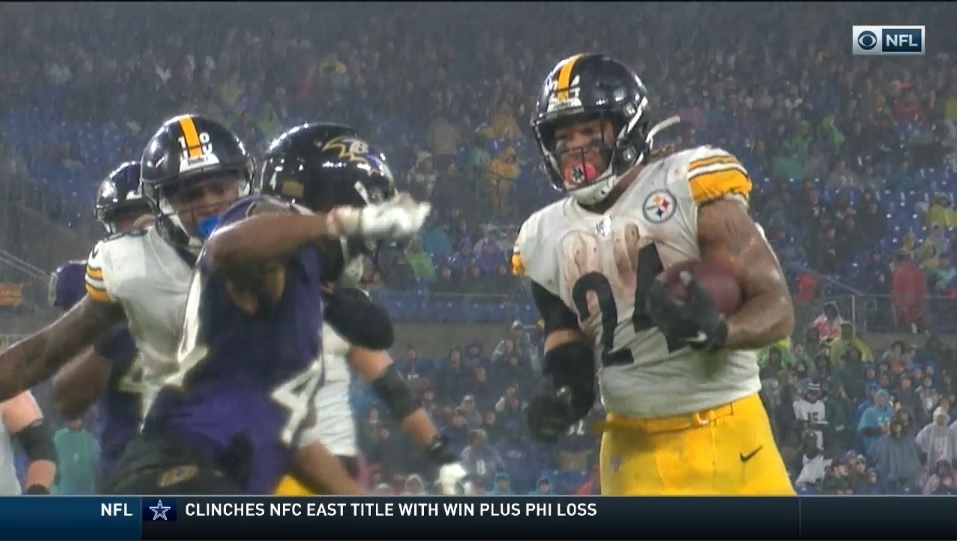 Devin Bush/ILB (1st) – Statistically he had his most impressive game of the season finishing with 11 solo tackles and 12 tackles overall. He started off slow on the first drive but on the second he made 4 tackles to help hold the Ravens to a field goal. He found his groove playing against a run heavy team making plays in every direction. He filled holes downhill, made plays scraping left and right and had maybe his most complete game.

In this game and over the second half of the season he showed very good awareness and knowledge of his assignment in the passing game. He nearly had his third interception but was correctly focusing on the receiver instead of the ball.  There was a pass or two completed to his area in zone but quickly made the tackle.  A good season for him overall.

This is Bush’s fourth tackle on the second drive. You see the play recognition pre snap and he gets knocked to the ground and still makes the tackle

Diontae Johnson/WR (3rd) – Johnson had seven targets and caught the 4 that were catchable. The incompletions included an overthrow and a deep pass into double coverage where he jumped too early. His first reception he showed nifty footwork to freeze the DB and create plenty of space on a slant. Tracked the ball well on a fade in the end zone but couldn’t get his feet down.  On two 3rd and long plays he displayed his run after catch ability making defenders miss and getting 21 yards after the catch. On the season he led Steelers receivers in targets, receptions and touchdowns.

He was effective on his two punt returns gaining 24 yards.  There was some side to side in his returns early in the year but removed that late in the year to use quickness and agility to get up field for positive gains.

Justin Layne/DB (3rd) – A couple weeks ago I mentioned that he was improving but needed to get in on some tackles. Well he got one this week on a Q3 punt. He’s worked hard over his 10 games to improve and he has. He had a good block on Johnsons first punt return. He also combined with Johnny Holton to down a punt on the one yard line.  Hopefully he can make a mark on defense next season.

Two clips here for Layne. First the block on the punt return and then working to get around the blocker to put himself in position on the tackle.

Benny Snell, Jr/RB (4rh) – Snell received the role of the lead back in the final week and he handled it well. After some impatience on his first two runs he settled down and was able to use leverage and vision to finish with 91 yards and touchdown. He took advantage of the left side often with four of his five best runs bouncing that way and lowered his shoulder to run through some tackles.

He did well in pass pro chipping on the edge and neutralizing blocks in the middle and on special teams he was often the first non-gunner down the field on punt coverage.

Pass pro rep by Snell displaying good timing to cut block on the blitzers up the middle taking one out and slowing the other.

Isaiah Buggs/DE (6th) – Buggs is another player who has shown steady improvement over the season despite limited in game opportunities. His pad level was very good in this game and his quickness at the snap was better. He had one tackle in this game and in my opinion, at the time, it was a big one. On the first drive after the Ravens had marched down the field running the ball 7 times for 41 yards he made a stop on 1st and 10 at the 21 yard line to slow their momentum.  The play for no gain helped stall the drive and hold them to a field goal.

Here is the tackle by Buggs fighting off the double team to make a stop at the LOS.

This game was a tough situation with terrible weather on the road but there were plays he could have made that he didn’t.  There were missed assignments by blockers and a few drops that added to it but it wasn’t all terrible. He made a nice throw to Johnson for 21 yards on a third down. That’s about it.

Okay so most of it was terrible. He had a few overthrows, a fumble deep in his own territory and two intentional grounding penalties the second resulting in a safety. It was a forgettable finish but remember he is an undrafted rookie. I think there is still some potential there to be a backup quarterback.

Kerrith Whyte/RB (7th CHI) – Whyte had only 3 opportunities to run the ball and 2 of those were on the power lead runs that they have overused him on. He ran hard and had 5 yards on his first two carries before having no shot outside and losing 4 on his final carry.

As a kick returner his first return was solid on a short kick and he got it out to the 29 yard line.  His last kick return he inexplicably overran the ball which led to poor field position on the eventual safety. It was a tough last game for him but showed positives late in the year.