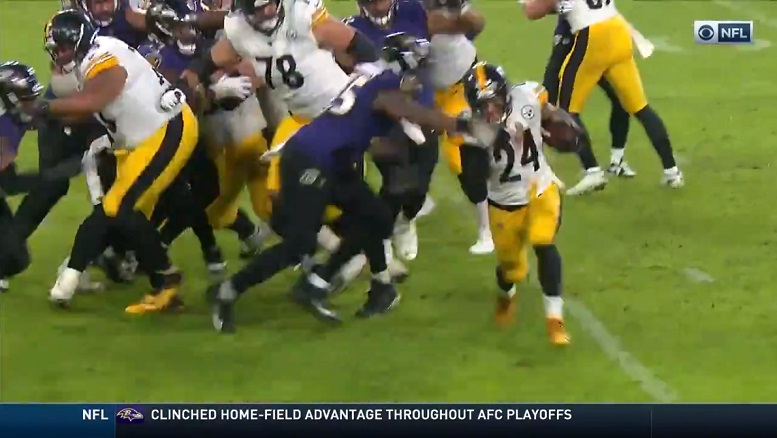 The Pittsburgh Steelers had very few bright spots in their 2019 regular season finale road loss to the Baltimore Ravens but rookie running back Benny Snell Jr. was certainly one of them.

Snell, who was drafted this year in the fourth-round out of Kentucky, rushed for 91 yards and a touchdown on 18 total carries against the Ravens on Sunday. His longest run was 19 yards and 11 of his 18 carries were successful runs.

Snell, who started in place of injured running back James Conner on Sunday, also looked willing and competent in pass protection on a few plays during Sunday’s loss to the Ravens.

While head coach Mike Tomlin didn’t have much to say about Snell when asked about his Sunday play following the team’s loss, what he did say about the rookie running back was positive.

“I liked his efforts,” Tomlin said of Snell.

Snell, who missed three games in the middle of the season due to a knee injury, rushed for 426 yards and two touchdowns on 108 total carries as a rookie. He also caught three passes for another 23 yards and played quite a bit on special teams throughout his rookie season.

Snell, Conner, Jaylen Samuels and Kerrith Whyte Jr. are all under contract for the 2020 season so there’s that. Conner and Snell now figure to compete during training camp for the right to be the team’s 2020 starter. While the Steelers could certainly decide to address the running back position again at some point during the 2020 NFL Draft, odds are good that if they did so it would be in the third round or later.

The Steelers running game was awful overall in 2019 and Conner led the way with 464 yards on 116 total carries. Conner is now the second lowest producing Steelers leading rusher for the organization in the Super Bowl era behind Don Shy, who led the Steelers in rushing in 1967 with 341 yards.