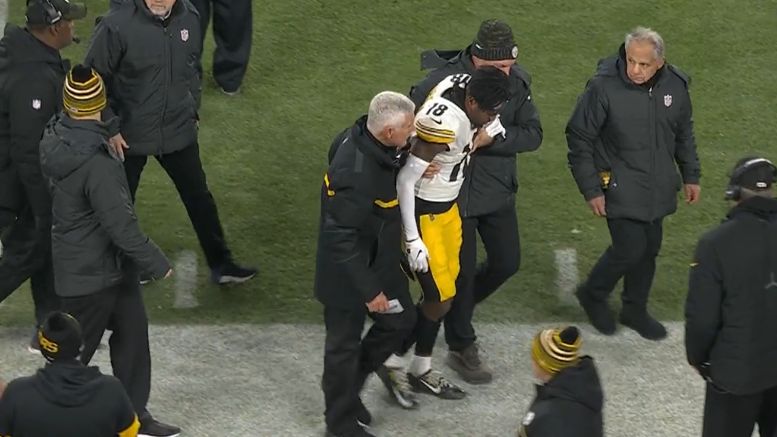 I don’t know if it would be fair to go so far as to say that Pittsburgh Steelers rookie wide receiver Diontae Johnson has disappeared over recent weeks, but it is clear that his production has slowed down significantly. Whether it has anything to do with the fact that he suffered a concussion three games ago is not something I’m educated enough to say.

But the dropoff in his numbers has been noticeable, and noticed, and offensive coordinator Randy Fichtner was asked about it, yesterday, specifically if it was a matter of him hitting the rookie wall, now 12 games into the year—about the length of a college football season.

Fichtner dismissed that notion, instead citing matters of health, which has been an issue for him literally going all the way back to rookie minicamp. “He’s always had a couple of nicks and knacks. This is a big person sport and he’s not a big guy right now”, he said, via transcript, “and unfortunately, he’s not going to have time to develop that until the offseason at this point”.

It might be worth noting that the Steelers’ other small wide receiver, Ryan Switzer, is on the Reserve/Injured List.

Fichtner added, “You think about where he’s played, their season’s over. We’re just really truly talking about our beginning of our season…That’s a whole lot of days more than he’s ever played. So it’s not just him. Good question, but it’s not just him”.

That answer does suggest that there is something to the rookie wall, of course, whether he intended it to or not. The rookie wall largely has to do with endurance and durability. College players typically go through a 12-game season. An NFL season is a third longer than that, and many rookies who are asked to shoulder a significant load find that it’s a significant adjustment.

For Johnson, it’s not just about that, however. He has also been dropping passes and experiencing miscommunications. He was the intended target on Devlin Hodges’ lone interception last week, and while the ball was overthrown, anyway, he clearly gave up on the route and never expected the ball would come his way.

He did later come back in the game and make a key catch for a third-down conversion. He has at least one reception in every game this year. All told, he has 36 catches for 423 yards and three touchdowns. And now he is also being asked to take over the punt returner role, so they’re not being shy in asking a lot of him, despite being a rookie out of Toledo—in part simply because they need him.