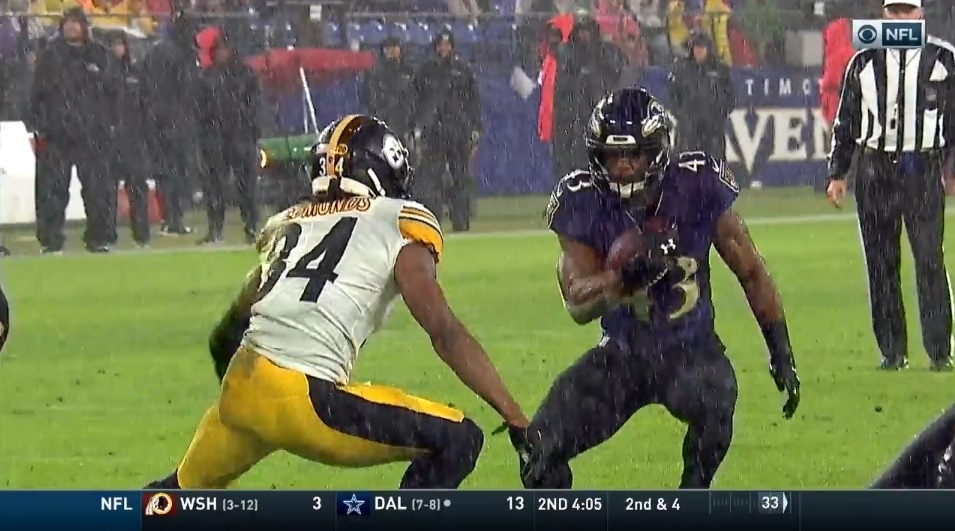 A tough, trying 2019 season came to a merciful end on Sunday in Baltimore as the backup Baltimore Ravens cruised to a 28-10 over the rival Pittsburgh Steelers, ending Pittsburgh’s season prematurely.

The weather was a disaster, the passing game was set back seemingly four full decades, and a defense that thrived on sacks, turnovers and impact plays struggled to slow down Baltimore’s explosive offense in a downpour.

For one final time, it’s time for positional grades following a Steelers’ game.

Man, Devlin Hodges went from playing some good football 5 weeks ago to playing some dreadful football in the final 3 weeks. Sunday’s performance was a disgrace to today’s passing-led product.

Granted, it was pouring in Baltimore, but Hodges looked like a Duck out of water, firing low and high often, connecting on just 9 of 25 attempts for 95 yards. He did drop a great ball to Diontae Johnson on the left sideline for a gain of 21 yards, but when asked to throw outside the numbers he had no touch and accuracy, and probably should have had a couple of balls picked of in the process.

Aside from his work with his arm, his legs appeared non-existent as he struggled with pressure, was sacked twice and fumbled late in the first half, leading to easy points for the Ravens.

Hodges has shown what he is in extended action: A No. 3 QB at best. Nothing more, nothing less.

I was really, really impressed with Benny Snell Jr. on Sunday. In a steady downpour Snell Jr. gave the Steelers a smash mouth option on the ground, racking up 91 rushing yards and a touchdown on 18 carries.

Snell Jr. barreled forward consistently, let defenders know about it, and really helped move the chains when things were going well for Pittsburgh in the second quarter.

After that though, the Steelers found themselves in a big hole and started to get desperate, moving away from the successful rushing attack.

Along with Snell Jr., Jaylen Samuels had one catch for 16 yards in the loss, showing some juice around the corner after the catch. Samuels didn’t get a carry in the loss, and it looks as though his role moving forward will be a pass-catching back when everyone is healthy.

Kerrith Whyte Jr. didn’t have an impact at all, rushing three times for just a yard. I think the field conditions had a ton to do with that, considering he didn’t have much burst.

Johnson had a great close to his rookie season, finishing with 4 catches for 54 yards, including a spectacular toe-tap catch for 21 yards along the left sideline on a third and long, extending a scoring drive for the Steelers.

The rookie showed burst and elusiveness after the catch, forcing a number of Ravens defenders to miss in space. He’s quite the find for the Steelers.

Outside of Johnson, James Washington and JuJu Smith-Schuster were downright awful for the Steelers. Washington had at least 2 drops on Sunday on his 3 targets, while Smith-Schuster had just 2 catches for 6 yards, including one that went for -5 yards.

Smith-Schuster struggled to work open on a waterlogged field, while Washington really struggled to squeeze the football, especially on short routes.

It was a bad close to the season for Steelers’ receivers not named Diontae Johnson.

McDonald simply wasn’t the blocker he was expected to be, and certainly wasn’t the security blanket for the quarterbacks this season.

Against the Ravens, McDonald made two tough catches through contact, but failed to make the impact he had last season as a run-after-catch tight end. As a blocker on Sunday, McDonald was mostly invisible, which was a common theme on the year.

Hodges held the ball far too long on the sack and the fumble, so that’s not on the Steelers’ offensive line. However, yet again the offensive line struggled to pass protect overall, often leaving rushers free to get after Hodges.

That’s been an overall issue the last month or so. Leaving free rushers into the backfield needs to be corrected this off-season under Shaun Sarrett.

That said, the offensive line really got after it on the ground, allowing the Steelers to lean heavily on Snell Jr. in the second quarter, which gave the Steelers life.

I thought Alejandro Villanueva and BJ Finney had solid games along the offensive line, especially as run blockers, while David DeCastro was his typical great self.

Ramon Foster and Matt Feiler were rather quiet and were noticeable when it came to allowing pressure.

It wasn’t a good game by any stretch of the imagination for the Steelers’ offensive line, but it wasn’t bad either.

With Robert Griffin III at quarterback, Pittsburgh knew the Ravens would come out running the football. They should have known that for fact once they saw the weather report.

Instead, the front 7 did nothing to slow down the Ravens, allowing Baltimore to rush for 223 yards on 44 carries, grinding down the Steelers’ defense.

While Cam Heyward, Javon Hargrave and Tyson Alualu had solid games within the box score (a combined 13 tackles and a sack), the Ravens had far too many open rushing lanes to exploit. That falls on the defensive line quite a bit.

TJ Watt better win the Defensive Player of the Year award. Sunday’s performance should have cemented that for the edge defender. Watt forced yet another fumble, setting a franchise single-season record, had half a sack and was pretty darn dominant off the right side. However, he had a couple bad penalties that kept drives alive for the Ravens.

Bud Dupree struggled with an injury suffered in the first half and really didn’t have much of an impact. He did record an early sack though, giving him 11.5 on the year to cap off a career year.

Inside, Devin Bush and Mark Barron were mostly below standard. Sure, Bush had a team-high 12 tackles, but he dropped an interception early that could have changed the game a bit, and really didn’t flow well to the football against the run unless it was right at him.

Barron was slow off blocks and Vince Williams didn’t provide much of his physical presence against a downhill rushing attack. Gus Edwards flat-out gashed the Steelers on Sunday.

The Ravens threw the ball just 21 times and finished with less than 100 yards passing, so the secondary had to do something right…right?

Joe Haden recorded his fifth interception of the season late in the game, but it didn’t have an effect on the game itself.

With the Ravens barely throwing the ball, it’s tough to say how good or bad Haden and Steven Nelson were. They didn’t get beat deep though and didn’t allow a completion of more than 20 yards.

Terrell Edmunds missed a tackle on Justice Hill’s touchdown run and wasn’t very good in the box overall. Minkah Fitzpatrick was slow at times to come downhill against the run, but he was a sure tackler once he arrived.

Mike Hilton was solid in the slot again, recording half a sack, and broke up a pass in the loss.

Jordan Berry’s dreadful close to the season continued as he dropped a snap deep in his own end, leading to a touchdown to put the final nail in the coffin for the Steelers’ season.

Berry did punt 5 times for an average of nearly 49 yards per punt, which is darn good in those conditions, but the dropped snap and subsequent touchdown ruined a solid day.

Chris Boswell wrapped up what should be a Pro Bowl season when all is said and done, but overall the special teams unit was outplayed.

Whyte Jr. misjudged a kickoff and had to recover it deep in his own end, while the Ravens ripped off a 31-yard return to open the game, putting themselves in good field position early.