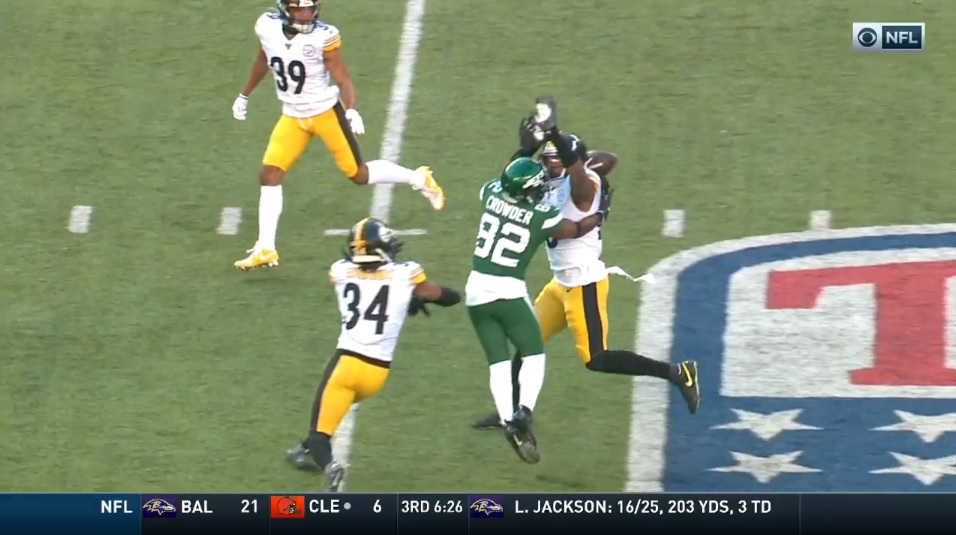 Right away it was a disaster at MetLife Stadium as the Jets’ offense got going early, jumping out to a 10-0 lead as Devlin Hodges threw two early interceptions, leading to his benching.

Mason Rudolph looked good coming on in relief before exiting with an injury, leading to Duck coming back into the game to try and play the hero. It was all for naught though as the Steelers fell to 8-7 with one game left against the AFC North champion Baltimore Ravens.

You’ll probably see this grade and scream at the screen, but keep in mind this is a collective grade for both Hodges and Rudolph.

Hodges simply couldn’t shake his turnover ways from last week, throwing two woeful interceptions early in the game – one of which kept at least 3 points off the board for the Steelers. He locks into his target and lets defenders read his eyes. He’s a gunslinger, but he killed the Steelers again on Sunday.

Rudolph came in and moved the football, looking confident in the pocket. He moved well too, which was a great sign after being a statue in the pocket before his benching more than a month ago in Cincinnati.

Rudolph nearly played right into the Christmas carol, leading the Steelers’ sleigh through the night, but a shoulder injury knocked him out of the game in the fourth quarter. I liked seeing him cut it loose on some tight-window throws, and he had great touch on Diontae Johnson’s 29-yard touchdown right before the half.

James Conner looked great out of the chute early, but he simply can’t stay healthy. I get being frustrated as a fan, but destroying him on twitter for something out of his control (yes, injuries are out of players’ control…this isn’t hard) is just too far over the top.

He’s worked his tail off to get back onto the field and has looked good on the 14 carries in the last two weeks, but the injury bug bit again, knocking him out of the game.

Once Conner left, it was all downhill for the Steelers.

Kerrith Whyte Jr. showed some flashes again, giving the Steelers a real twitchy running back, while Benny Snell Jr. provided the short-yardage work. Overall though, there just wasn’t a run game to speak of, as evidence by the 3.0 yards per carry on the afternoon.

I was pleased with Jaylen Samuels as a receiver. He made some tough catches near the line of scrimmage bailing out his quarterbacks, and ripped off a nice 27-yard catch-and-run down the left sideline after making a man miss in space. That’s his role moving forward. There really shouldn’t be any thought to that.

I have no idea what Blessaun Austin was doing on Johnson’s touchdown late in the half, but I’ll take it. Johnson dusted him.

That’s another strong game for the rookie who earlier this week admitted to hitting the rookie wall. He’s producing game after game these last three weeks or so. On Sunday, he was asked to be a possession receiver, finishing with 8 catches for 81 yards and the touchdown. A lot of his work came underneath, asking him to make defenders miss. He did that consistently.

James Washington also served as a possession receiver of sorts, finishing with 5 catches for 41 yards, including a huge catch on third and 14 over the middle of the field from Rudolph to move the chains. He was unable to come up with the game-tying touchdown catch late in the fourth quarter, but that was due to a great play by Jets safety Marcus Maye.

That brings us to JuJu Smith-Schuster. It’s been a terrible year for JuJu, thanks to drops, injuries, and inconsistent QB play. He dropped one ball early in the game and then had the fourth down desperation throw from Hodges go through his hands to give the Jets the win. He did make a great catch while getting drilled on a throw from Rudolph in the third quarter though. I think he’ll bounce back. You don’t put up the numbers he did to start his career to all of a sudden fade away and be an average WR. Shake off 2019 and regroup, JuJu.

For the second straight week I was really impressed with Nick Vannett the receiver. He’s starting to show some juice as a weapon. On Sunday, Vannett had just one catch, but it went for 18 yards and included him running over a Jets defensive back in the process. I like seeing tight ends on crossing routes.

As a blocker though it continues to be a big YIKES for Vannett.

Vance McDonald though…his terrible year continues. He’s just not a factor as a receiver and isn’t blocking like he did last season. I wonder how much that shoulder injury continues to affect him because he looks like a shell of himself.

The Steelers say Maurkice Pouncey’s snaps are not an issue. Well, I have to respectfully disagree. Pouncey again had at least two bad snaps on Sunday, one of which was bailed out due to a false start penalty. Unfortunately, Pouncey later left the game with what could be a serious lower body injury.

BJ Finney had a low snap too on the last play of the game, forcing Hodges to scoop it off the ground and fire it high to Smith-Schuster out of desperation.

Ramon Foster struggled throughout the game, allowing a sack to Quinnen Williams, while David DeCastro wasn’t very impactful and had a false start penalty.

I thought the two tackles – Alejandro Villanueva and Matt Feiler – had decent games, but overall this line continues to struggle against blitzes, failing to identify the free man and get him blocked up.

Le’Veon Bell had way too much success early in the game, and a lot of that had to do with guys not getting off of blocks. Against a below average Jets offensive line, this unit wasn’t good enough early on.

Fortunately, they cleaned it up and also collapsed the pocket against Sam Darnold a couple of times. As a trio, Cam Heyward, Tyson Alualu and Javon Hargrave combined for 18 tackles on the afternoon. That said, not one was a tackle for loss.

Coming into Sunday’s game TJ Watt and Bud Dupree had to be dominant. For the most part they were.

Watt forced yet another fumble on a strip sack, recovering the ball in the process or the triple play, while Dupree lived in the backfield, recording three tackles for loss and a sack of Darnold, giving him 10.5 on the season – his first year in double figures.

We’re lucky to have this dominant of an OLB duo. I hope they do whatever it takes to keep Dupree.

Inside, I thought Mark Barron and Devin Bush had their moments, especially against the run. The duo combined for 12 tackles and one TFL (Bush), and played pretty well in coverage.

Vince Williams was key late in the game against the run, tackling Bell for loss, forcing a punt. Anthony Chickillo…I’m still not sure why he’s getting defensive snaps. He was non-existent as a pass rusher and was called for too many men and offside on the same play, extending a Jets drive.

Darnold didn’t have a ton of success on the day, but it was a frustrating day nonetheless for the Steelers’ secondary.

Minkah Fitzpatrick’s pass interference penalty early in the game on third down extended New York’s opening drive, leading to a touchdown on which Terrell Edmunds was burned in coverage again and Joe Haden was late to rotate and help.

Haden dropped an interception with the Steelers down 7-0 that could have provided a spark, while Steven Nelson allowed Vyncent Smith to go to work on the left sideline, finishing with 3 catches for 32 yards.

Robbie Anderson was mostly held in check on the day, but that 21-yard touchdown to open the game was killer. Edmunds just doesn’t have it as a cover safety. Keep him in the box at this point if you’re going to play him.

I was really pleased with Mike Hilton. Quietly, he’s been so dominant in the slot. Pay the man! He can do it all for this defense.

I think the fake punt in Arizona two weeks ago broke Jordan Berry.

Berry had a 33-yard punt in a crucial spot on Sunday, helping him finish with just a 39.9 yards per punt average. However, he did drop 3 of his 7 punts inside the 20-yard line and had a long of 59 yards on the afternoon. If he can just get rid of the yips in a big spot he’ll be okay.

Johnson really flashed as a punt returner again, finishing with an average of 13.3 yards per punt return. He gave the Steelers some life on those returns, picking up yardage where the Steelers’ offense couldn’t.

However, the punt coverage team failed on its only real opportunity, allowing Braxton Berrios to shake free for a 20-yard return to near midfield, setting up a Jets’ scoring drive.

Danny Smith nearly schemed up a punt block and a kick block on Sunday. He’s getting these guys so close, they’re just not finishing.