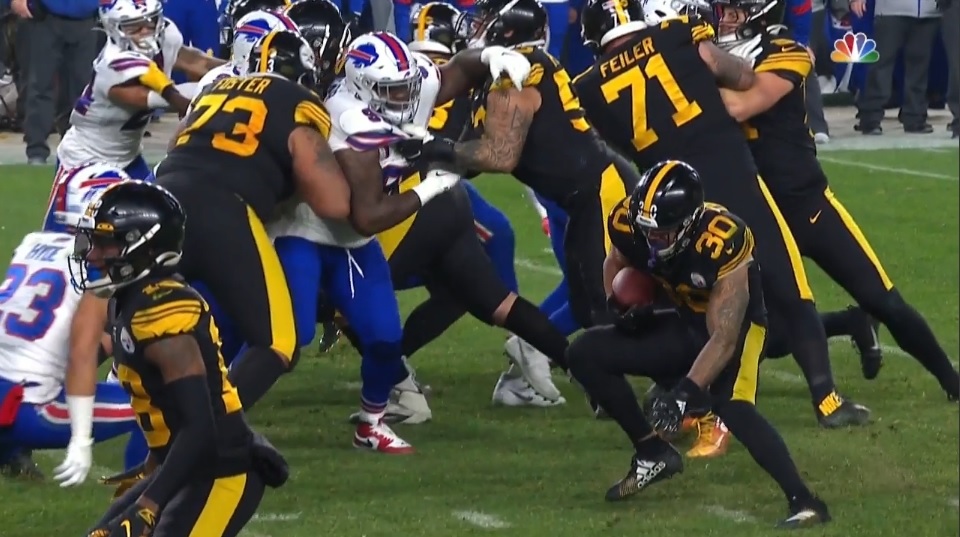 The talk all week was how Sunday night’s battle against the Buffalo Bills was going to be a big litmus test for the Pittsburgh Steelers’ offense.

Safe to say Devlin Hodges and the Steelers failed that litmus test in ugly fashion. Hodges threw 4 interceptions, held onto the football far too long against a fierce pass rush, and generally looked overwhelmed at times on a night in which he attempted an absurd 38 passes against a defense that struggled against the run all season.

Defensively, the Steelers hung tough against the Bills, allowing just 261 total yards of offense (131 passing yards) in Sunday night’s 17-10 loss. Issues popped up here and there, especially on the Bills’ game-winning touchdown pass from Josh Allen to Tyler Kroft, but Cam Heyward and TJ Watt dominated throughout the night, and Steven Nelson recorded his first interception of the season.

The loss certainly stings, but Pittsburgh still sits in the No. 6 spot in the AFC playoff picture with two games to go. Time to take care of business.

One week after turning in a strong performance on the road against the Arizona Cardinals, Hodges fell back to earth in a big, big way in primetime, throwing 4 interceptions against a tough Bills defense, costing the Steelers time and time again.

Hodges threw a bad pick to Tre’Davious White on a late, errant out-route for his second pick of the game, before then getting picked off in the end zone on the Steelers’ final two drives, resulting in touchbacks.

His pocket presence was not up to snuff either, holding onto the football far to long on multiple occasions, sliding into pressure, and failing to read where the blitz was coming from fast enough.

It was a dreadful game overall for Hodges; there’s no two ways around that.

James Conner absolutely chewed up the Bills’ front seven early on, and then inexplicably the Steelers abandoned the run, finishing with just 15 total rushes on the night.

Conner rushed 8 times for 53 yards, made a fool of Micah Hyde in the hole, and generally got the Steelers going forward offensively. But then the play calling got in the way of what was working as the Steelers moved away from the run game.

Kerrith Whyte Jr. rushed twice for -1 yard, while Benny Snell Jr. rushed twice for 1 yard. Buffalo did a good job stacking the box in hopes of Hodges beating them. He couldn’t and that played a role in the Steelers abandoning the run when facing 9 and 10 defenders in the box.

With Conner, I was really pleased with him overall. He should have received more touches. As a receiver, Conner finished with just 4 catches for 9 yards, but one of those catches went for a significant loss on a failed screen. However, Conner scored from 11 yards out on a swing pass, breaking a tackle in the flat. He looked healthy, had fresh legs and was out to prove his worth.

James Washington has seemingly broken through the ceiling of expectations at this point in his career. Once again, Washington had a really good game, finishing with five grabs for 83 yards. If Hodges makes a better throw or two on the night, Washington probably finds the end zone once or twice too.

Diontae Johnson did fumble the football away, but he had a strong night as well, mainly working against White. Johnson finished with five grabs for 62 yards, including the 29-yarder in which Hodges made a great hole shot, allowing Johnson to stiff arm a defender to the ground before fumbling. Thankfully, Tevin Jones was there to jump on the football.

Aside from those two, Deon Cain didn’t make much of an impact, while Jones didn’t do anything either. The pair was targeted three times total on the night.

For some reason, the Steelers decided to throw to Johnny Holton again. He finished with two catches for -1 yard.

Finally, Pittsburgh learned how to use a tight end as a receiving weapon.

Nick Vannett was a lovely sight to see as a pass catcher, finishing with five catches for 40 yards. He was tough to bring down after the catch too, running hard and dishing out punishment. He didn’t stretch the middle of the field like I’d like, but he did work in the flats.

Zach Gentry was found too, picking up a first down on a short 4-yard pitch-and-catch with Hodges.

As blockers, neither left much of a mark as blockers, but it was nice to see Vannett used so heavily as a receiver.

The first half was abysmal for the Steelers’ offensive line, but the unit turned things around from a protection standpoint in the second half.

Hodges was sacked just once, but was under pressure quite a bit – a lot of which was his fault for holding onto the football so darn long. He was hit seven times in the loss.

Buffalo blitzed a ton, which Hodges says caught the Steelers off guard. That’s incredible, considering Buffalo was No. 11 in football in blitz rate coming into the game.

Matt Feiler messed up on the lone sack against Hodges, leaving the inside guy to take the outside guy, while Ramon Foster and Alejandro Villanueva were in a funk throughout the night.

The run game was rolling early, but once the Bills rolled guys into the box, there was no way for the Steelers to get going on the ground once again. That’s not all on the offensive line. It’s tough to run when there are 9-10 guys in the box.

Heyward showed out in a big, big way Sunday night, dominating the Bills’ offensive line. The All-Pro candidate turned in 8 tackles, batted down a pass and forced a quick throw on third down the resulted in an incompletion, forcing a punt.

He was all over the place against the Bills, once again showing a national audience just how great he is.

Tyson Alualu continues to play some impressive football. He collapsed the pocket a few times, played the run well and batted down a pass. He continues to get it done in place of Stephon Tuitt.

I didn’t notice Javon Hargrave much when watching live, so it’s tough to grade him, but Heyward and Alualu were at the top of their games.

TJ Watt showed a national audience what the 2019 Defensive Player of the Year should look like. Watt recorded half a sack, forced a fumble, and lived in the Buffalo backfield all night long, and was simply dominant.

Unfortunately, Bud Dupree didn’t have much of an impact on the other side of the ball. He jumped offside once, negating a sack, struggled to rush the passer consistently against left tackle Dion Dawkins, and just wasn’t as impactful overall, finishing with three stops.

Inside, Devin Bush and Vince Williams had strong games, with Bush dropping into Allen’s throwing lane in the first half, leading to a high throw that Nelson picked off. Williams played the run well and recorded half a sack with Watt.

Mark Barron started off strong, playing well in coverage, but then there was some confusion or a blown assignment on Kroft’s game-winning TD. Barron looked like he was in man and then completely left Kroft to play an underneath route that was already well covered.

Mike Tomlin says it was zone coverage, but everyone else appeared to be in man. Maybe it was Cover 6, but who knows right now. It was just ugly.

Aside from the miscommunication/failure on Kroft’s TD, I thought Terrell Edmunds had a really strong game. Edmunds flew downhill against the run and led the team with 11 stops. He plays so well in the box. In coverage though, that’s another story.

The Bills didn’t really test Joe Haden Sunday night, and rightfully so. Haden was shutdown once again and even played the run well, flying downhill to stop Frank Gore in the red zone.

Nelson picked off his first pass of the year and generally played well, but the Bills did beat him for a 30-yard strike to John Brown on the go-ahead scoring drive.

Mike Hilton recovered a fumble and was sticky in coverage, while Minkah Fitzpatrick was his ever solid self, playing the run and pass well.

That touchdown though, whoever is at fault, it was as ugly as it gets.

Chris Boswell was money from 49 yards, Whyte Jr. had some juice in the return game, and Johnson was smart on punt returns, but my goodness Jordan Berry and the punt team was well below standard.

Kameron Canaday was called for a false start on fourth and 3 that looked like it might have been offside on the Bills, but he wasn’t the worst guy on special teams.

Berry, who has had an awesome year, shanked an early punt and then botched another one. Maybe that fake punt last week messed him up? Who knows?

Berry did finish with a respectable 43 yards per punt on the night, including a long of 58 yards, but those two shanks were tough to move past because it gave the Bills great field position.