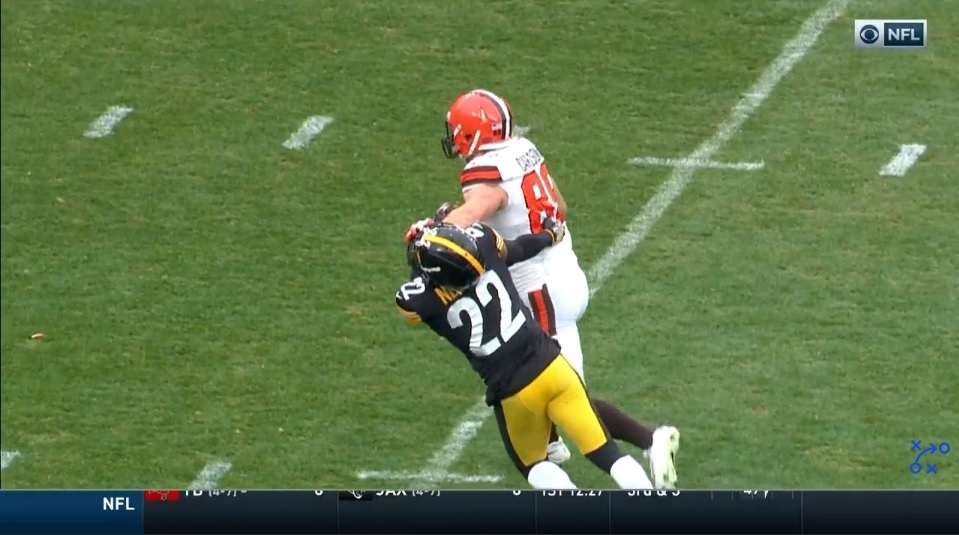 Sunday’s 20-13 win at Heinz Field was a major one for the Pittsburgh Steelers, as they not only knocked the Cleveland Browns seemingly out of the playoff picture, but also kept themselves firmly in the Wild Card race after all the adversity they’ve faced during the 2019 season.

While the win was a great one to see, the performance in the tackling department was downright dreadful, resulting in the worst performance of the year for the Steelers.

In total, 11 players missed at least one tackle in the win.

As you can see, I included some miss percentages for the single game and the season totals for each offender.

To make it easier to understand, in the game against the Browns, Terrell Edmunds recorded 6 total tackles and had 3 missed tackles, giving him 9 tackle attempts total. Of those 9 tackle attempts, he missed 3, giving him a miss percentage rate of 33.3 percent. Does that make sense?

The same goes for season totals. TJ Watt has 39 total tackles on the year and has missed 7 tackles, meaning he has made 46 tackle attempts. Of those 46 tackle attempts, 7 misses means he has a miss percentage rate of 15.2 percent.

I hope that makes things easier and puts them into perspective.

Now, to the game.

Edmunds had an up-and-down game, making some key open-field tackles while also whiffing at times. He made some plays in coverage, breaking up a touchdown to Demetrius Harris, but his bugaboo continues to be missed tackles.

For the second game in a row, Edmunds has missed double-digit stops, giving him 5 of his 14 misses in two games. That’s…not good.

Joe Haden and Cameron Sutton combined to miss tackles on a Kareem Hunt touchdown, while Bud Dupree and Javon Hargrave missed sacks on Baker Mayfield, giving the Browns life off of misses. Devin Bush really struggled to get off blocks against the run Sunday, leading to misses, while Mike Hilton’s miss came on the big stick in the backfield on Hunt that appeared to be a TFL until Hunt somehow stayed upright and gained a yard.

Let’s get to the miss breakdowns.

On the first drive of the game for the Browns, the Steelers missed 4 tackles, including the 2 here by Steven Nelson and Minkah Fitzpatrick on this 21-yard catch-and-run by Cleveland tight end Stephen Carlson.

Nelson takes a mean stiff-arm to the facemask, resulting in the miss, while Fitzpatrick comes flying in low to try and chop down the big tight end to no avail.

This play was a microcosm of what was to come for the secondary in the tackling department on the day. Fortunately, Nelson and Fitzpatrick didn’t miss again.

Hunt was a tough back to tackle on Sunday, with two of the most egregious plays from the Steelers resulting in splash plays for Hunt and the Browns. Here in the second quarter, Hunt takes a short dumpoff from Mayfield 15 yards to the house, running through tackles from Haden and Sutton.

I’d love to see more fight and want-to here from Sutton. At least try and give your defense a chance to defend some grass, rather than going easy on the tackle attempt to allow the touchdown.

Then, late in the second quarter, Hunt ripped off one of the best runs of the day across the league.

Edmunds is arguably the worst one here, simply because he has a clean look at Hunt and can’t get him to the ground, allowing Hunt to rip off an additional 8-10 yards on the carry.

This run allowed the Browns to take a couple of shots at the end zone late in the half, which ultimately hurt Mayfield’s hand and wrist.

Offensively, the Steelers had their best performance of the season in the missed tackles department, forcing 16 misses, meaning Pittsburgh won the tackles battle with a mark of +1.

The real obvious one that jumps off the page is Benny Snell Jr.’s 5 forced missed tackles, all of which came on his two longest runs of the day. There’s an obvious correlation there for Snell: break tackles or force outright misses and they can lead to big plays for the Steelers.

I didn’t highlight Snell’s forced misses though, simply because Kerrith Whyte Jr. and Jaylen Samuels stood out in a bigger way, at least in individual plays.

Trailing 3-0 in the first quarter, Whyte Jr. ripped off a 34-yard kick return to set the Steelers up near midfield. Whyte Jr. gave the Steelers something they haven’t had in a returner in quite a while: someone with the ability to make a man or two miss.

Whyte Jr. ran through 3 tackles here, ripping off an explosive return to give the Steelers’ offense some life near midfield.

Later in the game, Samuels – who looked so much better Sunday, running with power and explosion – recorded his lone forced missed tackle.

I hope Greedy Williams got the license plate on that truck.

We simply hadn’t seen that from Samuels before in his Steelers’ career, so this was so good to see from a guy who has all the talent in the world, yet hasn’t put it together. Hopefully Sunday’s strong game was a step in the right direction.