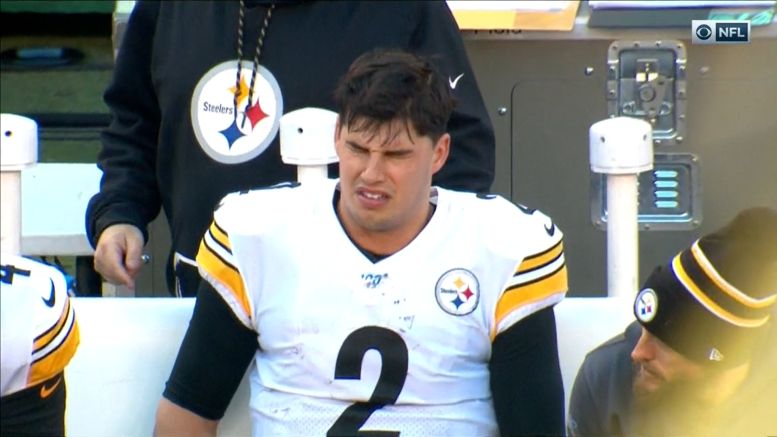 I’m sure it doesn’t happen very often that a quarterback benched due to performance during the middle of a game is forced to return to the lineup after his replacement suffers an injury that forces him out, in the same game. It happened today, of course, to the Pittsburgh Steelers in what functions as something of a microcosm of their season.

‘Erratic’ might be an overly generous description of the Steelers’ offense this season, a season in which the offense was never able to put up more than 27 points in a single game. And they only hit 27 points twice, both prior to the Week Seven bye week, against the two teams that earlier today competed against one another for the number one draft pick.

And in those two games combined, they had three touchdown drives that started in opponent territory. Oy vey.

Suffice it to say that the quarterback position has been insufficient all season. Even Ben Roethlisberger, in his six quarters of play, was not up to the necessary standards. He didn’t even throw a touchdown pass, though of course we later learned that he was dealing with a serious elbow injury.

So where does that leave us for Week 17? Mike Tomlin doesn’t know. From his comments, it sounds as though the intention was going to be to ride with Rudolph for the rest of the way once Hodges was pulled, but his injury status is unclear.

“Take care of the ball or we have decisions to make”, he told reporters after the game during his press conference. “Duck didn’t take care of the ball so we made a decision”. That would have functioned as a lasting one without the shoulder injury, which is still being evaluated.

Tomlin on the quarterback situation:

“Mason’s health is an element of the equation now”, Tomlin acknowledged, “so stay tuned”.

The Steelers are now in a must-win scenario against the Baltimore Ravens in Week 17, and they don’t even know who is going to be under center—or frankly even who should be under center, because it’s not as though either candidate has had much of a grip on the starting job at any point this year.