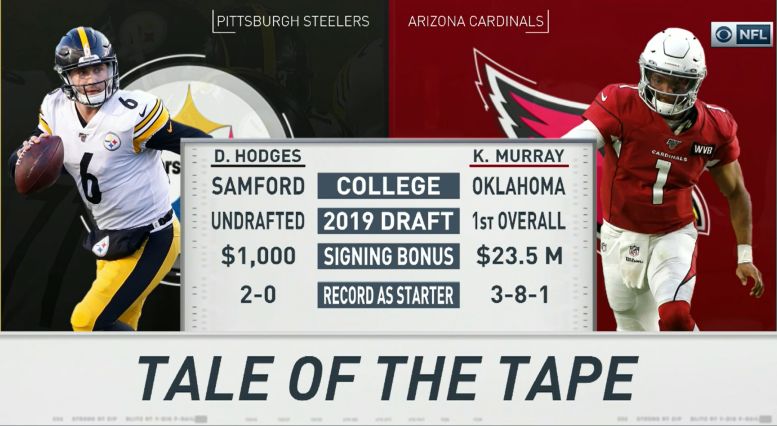 The broadcast crew showed a graphic on Sunday comparing the two starting rookie quarterbacks for the Arizona Cardinals and the Pittsburgh Steelers. Arizona is led by Kyler Murray, the first-overall pick, who received a signing bonus of over $23 million.

The Steelers’ quarterback is Devlin Hodges, who signed for a $10,000 signing bonus after earning a spot on the 90-man roster following his participation on an invitation bonus during rookie minicamp. That would buy one mean duck call, but it’s hardly comparable to Murray’s windfall.

Yet despite the fact that Murray has started 10 more games, they exited Sunday’s meeting with the same number of wins: three. Hodges has won each of the first three starts of his career, the first undrafted rookie non-replacement player in modern NFL history to do that, though of course he is also on a much better team.

Why is Hodges starting? You know the story, so I’m going to pass on retelling it for the 1000th time for now. The bottom line is he is in there because he is the best option the Steelers have right now, a better current option than 2018 third-round draft pick Mason Rudolph, who started eight games this year and was the quarterback of record for the team’s other five wins.

Head coach Mike Tomlin was asked during his pre-game press conference yesterday if Hodges is one of the great bargains in the NFL in this millennium. “I don’t know what his bonus was and I don’t know what other people’s bonus is”, he said.

I don’t care by what means these guys get here. I don’t look at them and see dollar signs. When I’m making decisions about their contributions, I don’t compare one man’s ability based on his bonus to another man’s ability. And I think that our guys find comfort in that. I think they embrace that approach. They’re not limited in terms of what they can do for us because of dollars and cents. He’s a capable man; he’s sitting in the room. He’s having an opportunity to prepare, and we view it as such.

While Hodges didn’t make the initial 53-man roster, I don’t think the Steelers can be accused of not treating him fairly. They did, after all, trade Joshua Dobbs and add him to the practice squad. If they had found a trading partner for Dobbs earlier, Hodges would have been back sooner, or more likely, would never have left.

But he’s here now, and he’s doing his thing, no matter what his weekly paycheck looks like. It’s enough to hunt in style, I can tell you that much. And so can James Washington.