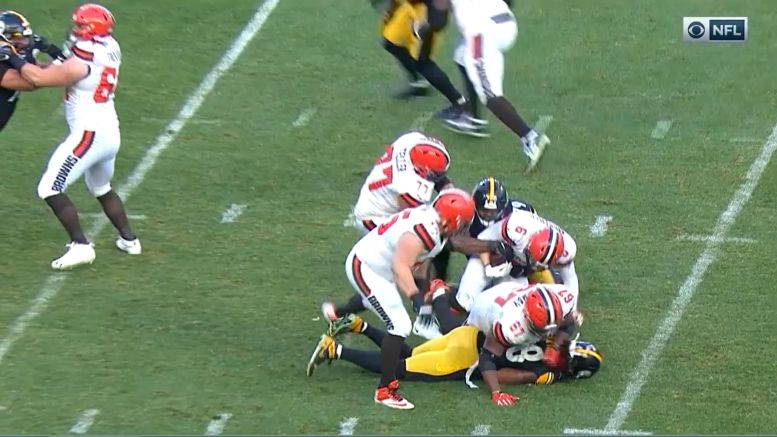 While the defense has been carrying the Pittsburgh Steelers for good portions of the season, one area in which they had been letting the team down had been in their quick-change results. Quick-change defense generally refers to when the offense turns the ball over and the defense has to come on the field in an unscheduled way and stop momentum.

Through the first eight weeks of the season, at least after the blowout in the opener, they turned the ball over 10 times and allowed 10 scores, including seven touchdowns. One of the three field goals was the game-winner in overtime.

Things have picked up in recent weeks in this phase, and that played a key role just a week ago. Just after the Cleveland Browns mustered a field goal to make it a one-score game, Devlin Hodges quickly threw an interception on the first play of the next drive, but the defense stepped up and forced a three-and out.

On the first play of the drive, Mike Hilton broke up a pass intended for Jarvis Landry, from the Steelers’ 30. Terrell Edmunds made a big open-field tackle on a screen to Kareem Hunt for no gain on second down. On third and 10, it was Javon Hargrave coming up with the sack for an eight-yard loss, knocking them out of field goal range.

During his The Mike Tomlin Show recording yesterday, the head coach called that moment a “significant turn of events”, adding, “I just liked the general demeanor of the group as they took the field. There was an awareness that they were facing adversity, and they were staring it in the face, and smiling in the face of it, and then they went out and performed that way”.

He also noted that this has been a change from the start of the season. “At the early stages of the year, when we weren’t winning football games, we weren’t doing a good enough job of supporting the offense when we turned the ball over”, he said, citing the loss to the San Francisco 49ers as an example, in which they scored two touchdowns on two turnovers in Steelers territory.

“Really, if you just look at it from that perspective, that was the difference in the 49er game, our inability to hold those guys to field goals on those turnovers”, he recalled. But he later noted that they had been “working hard in that area”, and that recently success is potentially an indicator of growth. “Hopefully that’s a catalyst for us as we continue to move forward”.