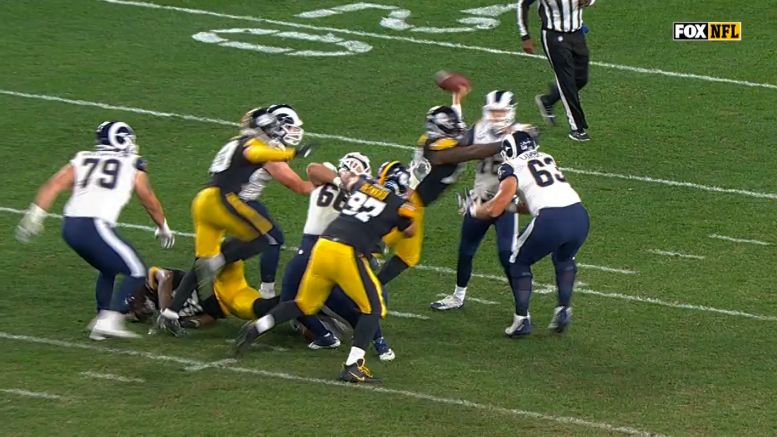 Since Stephon Tuitt’s injury, Pittsburgh Steelers defensive tackle Javon Hargrave has been consistently averaging about two thirds of the team’s snaps per game. In the six games since, he has put up 31 tackles, five for a loss, with two sacks, a forced fumble, and two quarterback hits.

Playing in a contract year, Hargrave understands how big the opportunity is, heading into free agency in 2020. But that’s not his focus right now. For the time being, he’s just focusing on the opportunity to play, because it’s what he loves to do.

“It’s fun”, he told Missi Matthews about his increased playing time following Tuitt’s injury. “I like playing football. But I think we all do. It’s our job. I love getting more reps and just being out there with the guys and being able to see them all make plays as a collective unit, just making plays”.

With the fun of having the opportunity to see a bigger role in the defense, of course, also comes greater responsibility. “It’s a lot”, he admitted. “Tuitt’s one of the best in the business, so we were sad to have had that happen to him, but it ended up putting me in a lot more opportunities to play more this year”.

A former third-round pick in 2016 out of a small school, Hargrave was an instant contributor, even if his playing time was relatively slight simply due to the fact that there aren’t a lot of opportunities for 3-4 defensive tackles during an average game in this era.

That is one of the reasons many expect him to price himself out of Pittsburgh, where he can go to a 4-3 team and get consistent, regular playing time, with the contract to match it. That may well happen. But, again, we’re not there yet. The focus is on the four games remaining.

And on beating his sack total from last season. Sitting at four, he has four more games to notch three in order to better the 6.5 he had in 2018, a career high. “Oh yeah. I’m aiming for it”, he said. “We’ve got four games left, so I’m gonna try to put my best football out there from now on”.

Hargrave has 14.5 sacks in his career. He has already logged close to 500 snaps this season and is likely to approach 650 or more, depending upon how long the defense is on the field over the course of the final month of the season. He’ll have even more opportunity to put quality tape out there if the Steelers are able to reach the postseason.