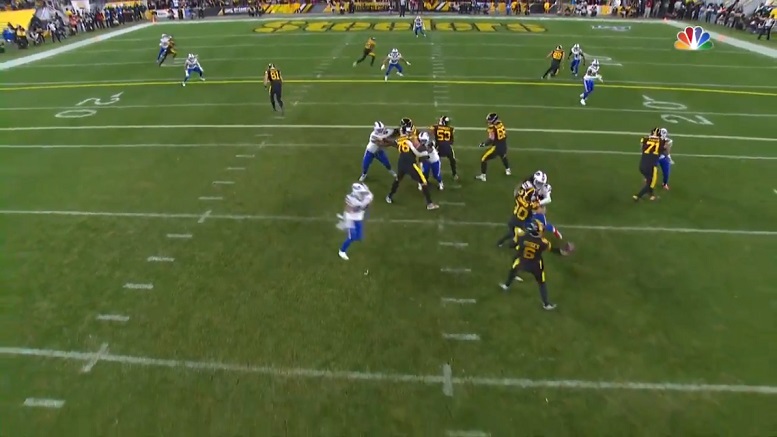 Of the four interceptions that Pittsburgh Steelers quarterback Devlin Hodges threw in the team’s Sunday home loss to the Buffalo Bills, his next to last one on a fourth down with two minutes remaining in regulation seems to be the one that’s been talked about the most. The reason for that is probably because the fan consensus since the play occurred is that Hodges should have hit wide receiver James Washington to the right side of the middle of the field instead of throwing deep into the end zone for wide receiver Deon Cain, likely based mainly on color commentary by Cris Collinsworth right after the play.

While it’s easy to maybe think that Hodges had a shot to hit a left to right moving Washington deep on that play based on the original television angles that were shown live Sunday night, the all-22 angles of that fourth down play tell a different story, in my opinion.

Hodges had a pass protecting running back James Conner virtually in his right lap on that play and a free running defensive back coming at him from his left. Additionally, at the time that Hodges released the pass to Cain, Washington was still in the middle of the field, as was the Bills deep safety, Jordan Poyer, the player that ultimately intercepted the pass. In short, Hodges would have needed to buy a little more time to get adjusted and to get the football off to Washington, and that would have been very tough for him to do when you see all angles of the play.

On Wednesday, Hodges was asked to comment on Washington possibly being a better option for him to throw to on that particular play and he was quite forthcoming in his response.

“If you were in the quarterback position, and everyone in the quarterback room knows, it wasn’t really wide open,” Hodges said of Washington on that play, according to Mike Prisuta of steelers.com. “Even Ben [Roethlisberger] told me he thought I threw it to the right guy. That was a fourth down play and it is definitely something to learn from. If I see it again, maybe get it to James.”

Was Hodges expecting the free safety to come down on that play if he threw to Washington?

“I did,” Hodges said. “Just the way he was. But like I say, that is in the past. I am just worried about this week.”

Perhaps Hodges would have had more time to adjust and get the football to Washington on that play had the Bills defense gone with the first defensive play call they appeared to have had in that situation. However, and as former NFL quarterback Dan Orlovsky recently pointed out in a video breakdown of that one play, the Bills called timeout right after the Steelers showed their offensive alignment coming out of the two-minute warning.

Great and easy to follow breakdown by @danorlovsky7 of the second to last INT by Devlin Hodges against the Bills on 4th down at the 2:00 mark and how the Buffalo defense adjusted after #Steelers offense showed hand. pic.twitter.com/dXpgm6WgwM

The Steelers didn’t appear to change their offensive play call after the timeout and Hodges paid for it by being under pressure. Credit the Bills and head coach Sean McDermott for winning that cat and mouse game, one of several he won throughout the contest.